Going that extra mile for animals

Image
A January trip to Best Friends benefits some of Oregon’s homeless pets.
By Jennifer Hayes

Fifteen years ago, Best Friends furnished a lifeline to a dog named Nadas. Intrigued by Nadas' story, Brandy Carson came to visit him at the Sanctuary, and she's been coming back ever since.

Nadas allegedly chased a horse, a capital offense in Oregon. However, his person wasn't about to give his dog up to death row, so appealed. Following a drawn-out court battle, Nadas' life would be spared if he were sent to an out-of-state sanctuary.

Brandy was a volunteer for Jackson County Animal Care and Control, a shelter in Phoenix, Oregon, that housed Nadas for well over a year. His story touched her, and she wanted to learn more. Once she read the book "Best Friends: The True Story of the World's Most Beloved Animal Sanctuary," she knew she'd have to check out the Sanctuary for herself. 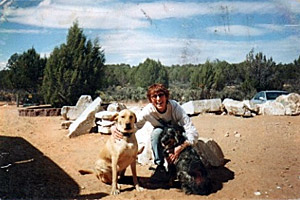 Brandy visited Nadas during her first trip to Best Friends in 2002. Since he was a red-collar dog, meaning only staff could interact with him, she couldn't have direct contact with him, but his new home at Best Friends left a lasting impression. Captivated by the staff and canine residents, as well as the serenity provided at the Sanctuary, she vowed to return.

Since then, she has come back four times, most recently in January. Someone had suggested that if she and her partner, Jeanette Larson, really wanted to make a difference, to visit in the winter, when there are fewer volunteers. Up to the challenge, they braved the below-freezing temperatures, going that extra mile for the animals.

For the first time ever, Brandy tore herself away from the dogs to volunteer one day at Wild Friends, Best Friends' wildlife rehabilitation department. One of her tasks was to take the towels used to line the bottoms of cages housing some of the recovering animals outside to shake out the discarded seeds. Imagine her delight and surprise to see a dozen deer appear out of nowhere to help "recycle" the leftovers.

However, her heart belongs to the dogs. In addition to volunteering at Dogtown, she and Jeanette hosted both Kyler and Mama Mia for sleepovers in their cottage.

"The minute we got Mama Mia into the door of the cottage, she knew the drill," says Brandy, laughing. "She disappeared and was on the bed." Not willing to give up a good thing, Mama Mia turned out to be a bit of a bed hog. No worries, they didn't mind sharing at all. 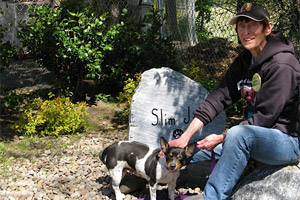 Brandy not only shared her bed with Mama Mia; she shared ideas from the Sanctuary when she returned home. Part of the reason she visits Best Friends is to convey tips to Jackson County Animal Care and Control.

After this trip, she shared an enrichment idea: Cut holes in PVC pipes and fill them with kibble. A number of them are already assembled, providing hours of entertainment for their shelter dogs. She also shares each issue of the Best Friends magazine, which has numerous articles discussing already-proven lifesaving promotions, with shelter staff.

After doing laundry and walking dogs for years, she's now an adoption ambassador, helping match people with the right dogs, as well as a shelter tour guide for groups of children. With all she does, you truly can't tell she's 78 years old.

It's no surprise that Tracy Gault, vice president of Friends of the Animal Shelter, says that "Brandy is an amazing volunteer whose almost 20 years of dedicated service is very much valued and appreciated!"

Of course, Brandy wouldn't have it any other way. Thanks to Nadas and her own subsequent inspirational trips to Best Friends, Brandy says, "I'm realizing that yes it's possible, even for us here in a small place, to make quite drastic and good changes toward the quality of life of our animals."