A golden eagle back from the brink 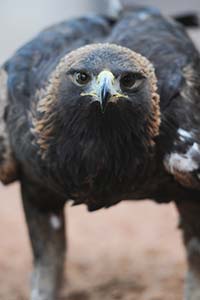 In the beginning, though, he couldn't keep his eyes open. The golden eagle had been hit by two cars near Jacob Lake, a small town a couple of hours south of Best Friends. That's what the note said on the TV box in which he was left.

The kind people who rescued him called the Arizona Game and Fish Department in Phoenix to let them know that they'd found the injured eagle and where they had left him, but there was a bit of confusion about which building the people had left the box in front of, which made it hard to find him.

Someone who noticed the box then called Wild Friends, and Carmen, after consulting with the Arizona Game and Fish Department (because the eagle had been found in Arizona near the Utah border), sent caregiver Abe McCowan to pick up the eagle.

In the meantime, after talking with Carmen, Jackie, one of the Kaibab National Forest park staff, put the eagle into her own car since that was the warmest place available.

Arriving late in the day

By the time Abe got back to Best Friends with the injured eagle, it was late in the day.

When Carmen examined the eagle, she found that his left wing was dislocated and his right wing had a fracture. He was between three and five years old, and he was in shock. She put him on oxygen and a lot of supportive care, and bandaged his injured wings.

A first ray of hope

For days, he lay unresponsive and had to be tube-fed a liquid diet. When Carmen saw him lift his head up, that was the first ray of hope. 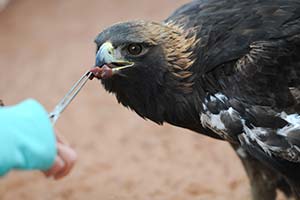 He was still so weak that it was easy to feed him herself just by wrapping him in a towel and giving him his dinner. He wasn't strong enough to fight back.

Now he's full of energy, and it takes two people to hold him securely and give him his antibiotic shot and food. (It's not easy to hold a golden eagle, and it can be very dangerous to do so. If you find one that seems to be injured, call a licensed wildlife rehabilitator for help. Then stay nearby until help arrives.)

Surgery and looking to the future

At the beginning of September, the eagle went to see Dr. Michael Dix, head veterinarian of the Best Friends clinic, for surgery on both wings. The goal of the surgery was to prevent him from experiencing any pain in the future in his left wing and to repair the fracture in the right wing. Dr. Mike was optimistic about the eagle's chances of a future with both wings that feel comfortable and do not hurt.

When his bandages are off, the eagle's next step will be to go into a small aviary, and then into the large flight aviary to give his wings a chance to gain strength and the power to fly again. It is not certain that he will be releasable; if he is, that will be perfect. If not, assuming he can live a good quality of life, free of pain, then the U.S. Fish and Wildlife Service will find him a qualified facility where he can live a happy life, spending his time teaching visitors about the magnificence of birds like him.

Because golden eagles are scavengers, they can often be found on or near roads, looking for road kill. So please don't speed, keep your eyes open for eagles and other wildlife, and keep the phone number of a licensed wildlife rehabilitator handy.