Image
Golden eagle is being rehabilitated after being hit by a semitruck. She will be released if possible or go to the Gray Snow Eagle House in Oklahoma.
By Sharon St. Joan

After Sia, a golden eagle, had an encounter with a semitruck, she was brought to Debbie Pappas, a licensed wildlife rehabilitator near Salt Lake City. Debbie gave her expert care and set her on the road to recovery, but Sia would need a really big flight aviary to practice flying and get her strength back. Best Friends rehabilitation flight aviary is over 100 feet long, the largest in Utah.

Sia made the trip to Best Friends late in the summer, and she started out in a smaller aviary. Her first day, everything looked new and different, and she was too stressed to eat anything, but by the second day, life looked a bit better, and she got up on the perches. Soon, she moved into the big flight aviary and found her favorite spot, a perch about eight feet high.

Eagles are easygoing birds most of the time. They don’t dash around the way some small hawks do. They’d rather just sit and enjoy the view. Sia is like this, too. Why dash about when you can just watch the clouds go by? So Carmen Smith and Barbara Weider, licensed wildlife rehabilitators, take turns encouraging Sia to get some exercise. As the TV message for children says, “Get out and play an hour a day.” Only for Sia, exercise needs to be several times a day. 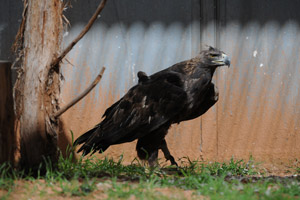 This means approaching Sia until she feels they are closer than she is comfortable with, at which point she “flies” away. So far, flying means running while flapping her huge wings, with her toes still running along on the sand. If all goes well, she’ll soon be able to really fly, with her toes off the ground, and with luck, she’ll go higher and higher, flying along near the top of the aviary. Then she can be released to soar high into the clouds that she so much enjoys watching.

Her wings are symmetrical, with no drooping, so that’s a good sign. She has no fractures. The only sign of injury is a slight bald spot on her head, possibly from head trauma when she had the incident with the truck.

Her coordination is good, so the Wild Friends rehabilitators have their fingers crossed that she will do well. A bird of prey must have very strong flight to be releasable. Otherwise they aren’t able to survive in the wild.

While the goal is to release Sia, there is a back-up plan, and she has a wonderful place waiting for her, if needed. The Bah Kho-Je Xla Chi, or Gray Snow Eagle House, in Perkins, Oklahoma, is run by the Iowa tribe on their buffalo preserve. Built in 2006 to house golden eagles and bald eagles, both those being rehabilitated and those that are nonreleasable who live there as educational birds. The center is licensed by the U.S. Fish and Wildlife Service.

As a valuable service, the center is also legally permitted to gather naturally molted eagle feathers and ship them to other tribes for ceremonial use.

Cisco, another golden eagle who came to Wild Friends for a couple of months last spring, is already living at the Gray Snow Eagle House and recommends it highly.

Sia will have a good life, and we send our best wishes for her to fly high again among the clouds.

If you find any wild bird or animal who may need help, you may call Wild Friends at 435-644-2001, ext. 4460, for the contact information of a licensed wildlife rehabilitator in your area.