Image
Katie the horse begins to embrace the wonders of traveling and the rewards of human friendship. December 29, 2010
By Best Friends Animal Society
By David Dickson

Grand adventures are in the eye of the beholder. To someone who picks a different country every year for a vacation destination, it can take a lot to be impressed. But for those like Katie the horse with limited travel experience, even a short afternoon stroll becomes an exciting outing. "She’s never been anywhere," explains Best Friends' horse trainer and caregiver Linda Alvey. At long last, however, Katie is starting to see a bit of the world.

Katie came to Best Friends a year ago when her previous family could no longer meet her needs. She’d lived in a home where the husband passed on ten years previously and the wife did her best to care for Katie, yet didn’t know much about horses. By the time she showed up at the Sanctuary, Katie was convinced people and horses didn’t need to mix much at all, and certainly not as friends. The caregivers couldn’t touch Katie in the beginning.

Earning an animal’s trust can take a long time even in the best of circumstances. Katie remained fixed on her point of view that people were not for her. The progress came slowly. At Best Friends, that’s not a big deal. Animals come from all different backgrounds and are allowed to progress at the rate that works best for them. That said, it doesn’t mean caregivers don’t use tricks now and then to try and prod the process along a little.

For Katie, that meant extra one-on-one time. Linda could tell Katie really needed additional help so she brought her home as a foster horse for several months. 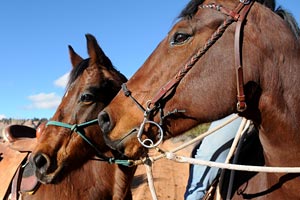 During this time, Katie finally began to learn how to interact with people. One of the real helps here was Linda’s personal horses, all of whom are good role models in behavior and in trusting people. Once Katie began to see the bigger picture of life, it was time for her to return to the Sanctuary where she could keep learning.

Recently, Linda thought Katie was ready for an outing. With permission to try an excursion, she brought her own horse Hank — a fantastic role model — and loaded the two of them into a horse trailer. Katie had previously resisted the concept of getting into a trailer. With laid-back Hank showing the way, however, she didn’t put up a fuss. 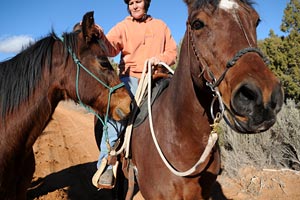 Linda brought them to a nearby secluded area where they could walk free from distractions and other people. Linda "ponied" Katie, which means she rode Hank and led Katie down the trail by holding a lead rope. This practice allows a horse to get used to the idea of going for walks without feeling threatened by carrying a rider.

"She did really well," said Linda. They were able to walk for a couple of hours. For Katie, that was the equivalent of hopping on a 747 to see the other side of the world. Linda plans to continue these outings, and in short order the other caregivers will be able to take her out as well.

One final detail: During the whole ride, even when Linda’s energetic dogs were zipping back and forth, Katie kept her cool. She’s finally realizing she doesn’t need to feel threatened by something just because it’s different. Looks like a new adventurer is born!

You did it! Thank you for the awe-inspiring response to this year’s holiday matching grant challenge. All in all, you’ve helped raise $4.2 million to save more animals. The match may be over, but 2010 isn’t! There’s still time to make a tax-deductible donation to Best Friends. The animals will benefit, and so will you – come tax time!

Best Friends has about 20 horses who are available for adoption.

Can't adopt, but would like to help the horses? Consider sponsoring one of our barnyard pals!