Image
Annual Greyhound Gathering takes place in Kanab, Utah, where lovers of the breed, who have often rescued their dogs from the racing industry, meet.
By Sandy Miller

It was three days before the annual Greyhound Gathering, a national event held in Kanab, Utah.

The last thing organizer Claudia Presto needed to hear was that it might storm.

"I need to find a place inside for 300 hounds and 250 owners," Presto said without even a hint of panic in her voice.

On Friday evening, threatening skies and a cold wind blew in, meaning that an auction, raffle and recognition ceremony had to be moved from a community dog park to the basement of the local theater. But by Saturday, the winds had calmed and greyhounds and their people basked in the sun on an elementary school lawn, taking a little break between the morning parade and an afternoon of carnival activities and the big "Blur of Fur Run."

"Have you ever seen so many dogs together in one place?" asked Mike Shaw, as he lounged with greyhounds Launa and Avi.

Shaw said one of the biggest misconceptions about greyhounds is that they must be hyper due to their natural ability to run. But although their sleek and graceful bodies are built to run fast, greyhounds are one of the most laid back dogs around, Shaw said.

That’s just one of the things people love about greyhounds – their gentle nature. 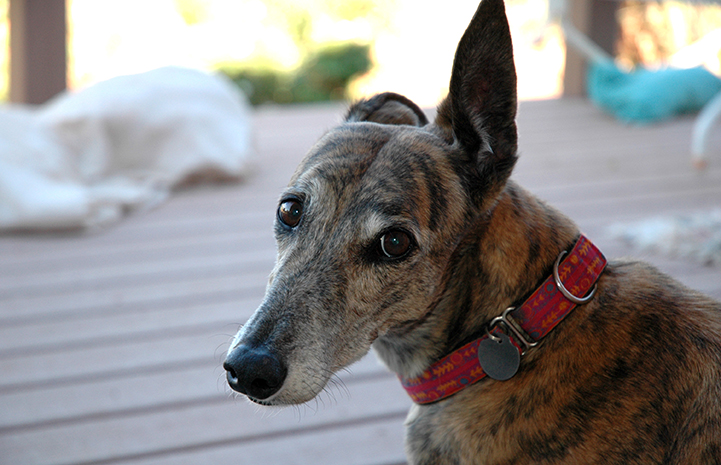 "People drive from all over to come here because of the love they have for this elegant, gentle breed," Presto said. "People fall in love with them because they are just about the best pet you can have."

It was the second year Shaw had traveled with his greyhounds from their home in Oceanside, Calif. for the three-day event, which included a variety of activities for people and hounds alike. Humans enjoyed listening to guest speakers and being with other greyhound people while the pooches enjoyed activities like "Paint by Paws," "Pawticures" and "Dunkin’ for Dogs." There was even a "Yappy Hour" where humans enjoyed a glass or two of Chardonnay while their hounds downed chicken broth shots.

"The camaraderie with other greyhound people is awesome," said Joy Dysert, a first-time gathering attendee who’d driven up from Phoenix, Ariz., with her greyhounds Boney and Sissy, who both sported black and white-striped jail outfits. "The greyhounds hang out together like old friends."

Stories of adopters and their greyhounds

Mike and Joyce Welton of Lake Arrowhead, Calif., fell in love with greyhounds five years ago after their 15-year-old cairn terrier Kerry passed away. They wanted to find a companion for their other cairn terrier, 14-year-old Duffy, who was grieving the loss of Kerry. They decided that rather than getting another terrier, they would rescue a dog. So they started fostering greyhounds through the Los Angeles-Orange County chapter of Greyhound Pets of America. It wasn’t long before they adopted greyhound Edie, who was just the medicine Duffy needed.

Then came greyhound, Emma, who bonded so well with Edie they adopted her, too, followed by Luke, who "was too big and pretty to give up," Mike Welton said. Greyhound Mocha is the newest addition to their happy family.

Greyhounds rescued from the racing industry

There are still many, many greyhounds waiting to be rescued from the racing industry, where they’ve been bred to make a profit on the track. Each year, thousands of young greyhounds who don’t show potential to make money are disposed of at breeding and training farms, according to the Greyhound Protection League. In addition, each week at tracks around the country, truckloads of failed or injured racers are destroyed, abandoned or sold to research labs.

Thankfully, there are a number of greyhound rescue organizations across the U.S. dedicated to giving these wonderful creatures a second chance at life and to making greyhound racing a thing of the past. Public awareness of the horrors of greyhound racing is making a difference. Although there are currently 39 greyhound racetracks in the U.S., 23 tracks have been forced to shut down live racing due to dramatic declines in attendance.

"Advocacy groups have had an impact," Presto said.

Meanwhile, there are plenty of greyhounds still waiting for good homes.

"It’s got to be the right kind of home – people who treat animals as part of the family and have fenced yards – a home with a lot of love," Presto said.

Find out more about these wonderful dogs at Greyhound Gang.