From the Utah Department of Natural Resources to Best Friends and on to another rehab facility, an American white pelican gets a second chance.
By Sharon St. Joan 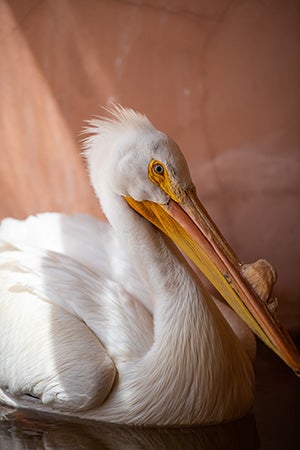 Caring for wildlife is often a group effort, and that’s what it took to save an American white pelican that was down on the ground under a power line.

Keith Day, the regional officer and sensitive species specialist at the Utah Department of Natural Resources, picked up the bird, placed him in a carrier in his truck and called Best Friends. Soon, Wren Blossfeld, licensed wildlife rehabilitator and head rehabilitator at Wild Friends, was on her way to meet him and the pelican just north of the Sanctuary.

Lauren Ross, a Wild Friends caregiver and licensed rehabilitation subpermittee, was there to help when Wren arrived with the bird, who turned out to be quite a handful at 11 1/2 pounds.

Injured pelican settles in at Sanctuary

During an examination that included taking a blood sample and six X-rays (just to get all of him in frame), it was clear that the big bird as definitely not thrilled to be in captivity.

Feeding him once a day required two people ― one to hold him down gently and the other to put food in his mouth.

Although there were no visible injuries, he was having some trouble with his legs.

[Injured roadrunner gets back on his feet at Wild Friends]

Rather than putting him up in the 100-foot-long flight aviary where he might have risked landing on the hard sand and hurting himself, they prepared a smaller aviary for him that included a pool. And later that afternoon when he entered the water, it was apparent that he was able to kick well with both feet and propel himself along with no problem.

Later that night, long after they had the pelican set up in the aviary, Wren became concerned: Would he be able to get out of the water by himself? So, twice during the night (first at midnight, then again at 5 a.m.) she drove all the way back to Best Friends (a half-hour round trip) to check and be sure he wasn’t stuck in the pool unable to get out. Both times he was fine and sleeping on the sand near the edge of the pool, so she felt reassured he would by OK by himself. 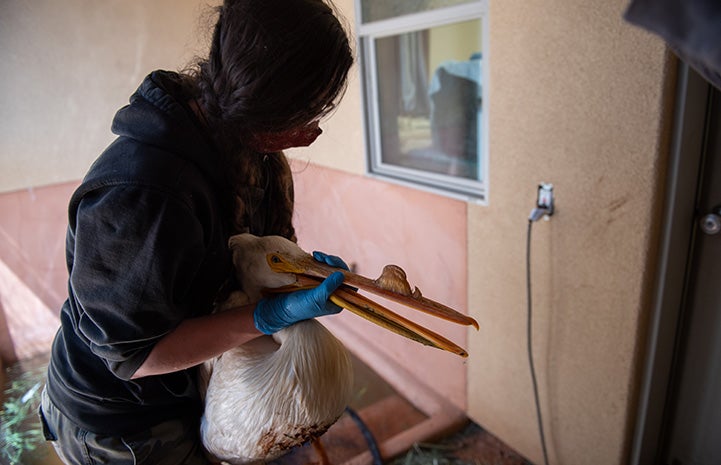 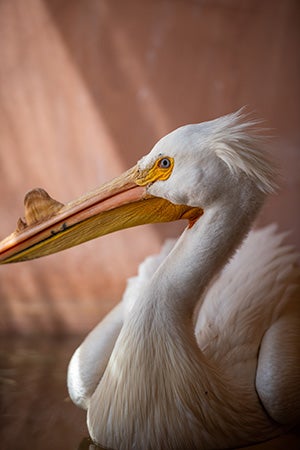 Over the next few days, staff members administered fluid therapy and medication for pain. Though it was still unclear what was wrong with him, his blood test came back negative for pathogens and it looked like he just needed supportive care until he was strong again.

[Meet the owls, rabbits, ravens, and other wildlife at Best Friends]

One thing was missing: some friends of his own kind. Since pelicans are flock birds and he was the only one at the Sanctuary, he would need some pelican friends. The team knew just the right place to look ― the Wildlife Rehabilitation Center of Northern Utah. DaLynn Marthaler, the center’s executive director, said yes, they had several pelicans in rehabilitation and they’d be happy to have another.

Lauren drove the pelican up to Ogden, Utah, where he has settled in well with the other pelicans and is delighted to have some friends. Since the center has a great deal of expertise with pelicans, he will stand a good chance there of regaining his strength and eventually being released back to the wild on one of the nearby lakes that are filled with pelicans.

Best Friends is open to visitors and volunteers to help hands-on with the animals, take a tour or just to soak up the beauty of southern Utah. Come and visit us!