Happiness at the Sanctuary 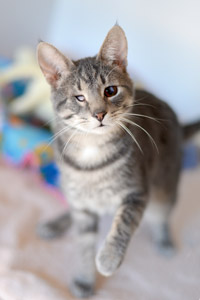 Tyresius may only be just over a year old, but this little survivor has already learned a lot about life. He spent his first 10 months on the streets, where an injury left him without his right eye and with severe scarring on the cornea of his left eye. A stray, partially blind kitten doesn’t stand much of a chance. Luckily, Ty, as his caregivers have nicknamed him, was rescued by a local humane society. It was a step in the right direction, but when they discovered he has feline leukemia (FeLV), Ty had to stay confined away from other cats, even though he desperately wanted to play.

The world at play

Off the streets and into a cage wasn’t exactly Ty’s idea of paradise. He was safe, but because he has FeLV, a virus that attacks cats’ immune systems, making them vulnerable to infections and diseases, he was unable to interact with other cats. And, because FeLV is a "social disease" (it is easily spread from one cat to another through close physical contact), Tyresius was separated from cats who didn't have the virus, so as not to infect them.

Every day, the incredibly friendly, eager little kitten would longingly watch the other kittens tumbling around. It seemed the whole world was at play, and Ty wanted so badly to join in the fun and games. The humane society wanted Ty to enjoy his kittenhood and have a chance at a normal life. So they reached out to Best Friends.

Shortly after Ty arrived at the Sanctuary, he began charming people by jumping up onto any available lap or shoulder. If you kneel on the floor in Ty’s room, he will run right up and rub vigorously all over you, purring like an old, rusty motor. In fact, it’s not his missing eye but his happy, high-decibel purr that is his most distinctive feature. Sometimes he even opens his mouth while purring, amplifying the sound. His caregivers joke that he’s a noisy little helicopter.

Ty even looks a bit like a helicopter as he flies around his room at Casa de Calmar, where the Sanctuary’s cats with FeLV live. Since all of the cats there have the virus, they are free to play and interact with each other, just like other cats who don’t have the virus. So, for the first time in his life, Tyresius has friends. 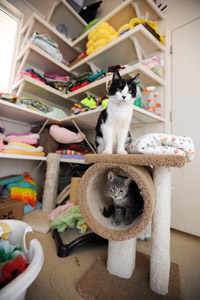 Ty’s best friend is Ten Bears – and their relationship shows how very special and charming Ty is. Ten Bears is an older cat who has a reputation for being a bit ornery. In fact, he mainly stays in the office at Calmar because of his tendency to chase other cats. He isn’t trying to hurt them, but he plays rough, rules the roost, and wants everyone to know it.

And this is just fine with Tyresius, who, having missed out on much of the rough play of kittenhood, is more than happy to have a feisty older friend to wrestle with. When they aren’t play fighting or racing across the lobby, Ty and Ten Bears go on sleepovers together. They’ll also lounge around on the office chairs and watch YouTube videos of birds. Tails twitching, eyes glued to the screen, the two make quite a pair. It’s happiness at last for one very special cat.

Learn more about adoptable cats at the Sanctuary