A happy ending for an abandoned puppy

Image
Found fending for himself, abandoned puppy is rescued, gets tick treatment, finally gets enough food and receives socialization in his foster home.
By Christelle L. Del Prete

Gemini was only four months old and weighed just 17 pounds when he was rescued. But he had no idea how small and weak he was. He’d been found alone and abandoned in a park not far from the Sanctuary. Because he was in survival mode, he acted like a much bigger dog — and one who’d been on the mean streets for a long time.

Gemini tried take care of himself, but he needed help. And he was about to get lots of it.

The feisty little pup was ready to take on anyone or anything that messed with him, including much older and larger dogs and even people. But what Gemini didn’t know at the time was that he was finally safe. He would never again have to fight for his life, and his happy ending was much closer than he could imagine.

After his rescue and a brief stop at the local shelter, Gemini went to a loving Best Friends foster home. He needed some time in a stable home environment so that he could recover from his traumatic experience and improve his social skills with other dogs.

He lived with five other dogs ― all of them bigger than Gemini. But when he first moved in, he wanted to beat up every one of them ― that is, until one them, a partially blind and deaf shepherd mix, took the scrappy puppy under her wing. She taught him how to be part of the pack, and soon, he was sleeping, walking and playing with the other dogs ― just like any normal four-month-old puppy. 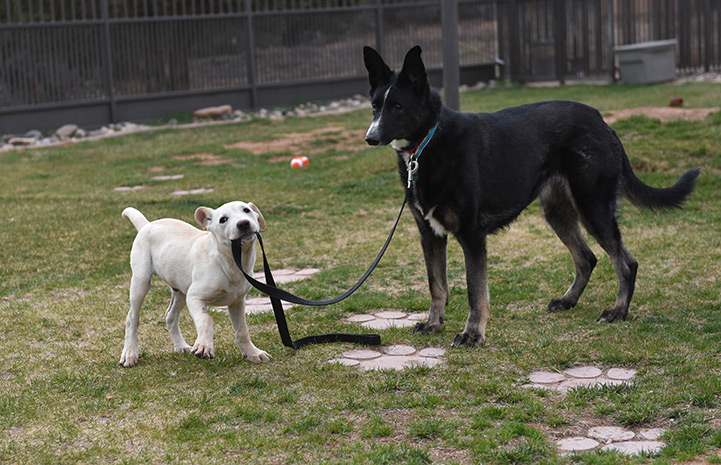 Overcoming a rough start in life

Of course, Gemini had some other obstacles to overcome after his rough start. He was treated at the Best Friends Animal Clinic because he’d become covered in ticks from living outside. He also needed to be dewormed. When those things were taken care of, he had to work on putting on some weight. Luckily, that wasn’t very hard. Because after having suffered from starvation, Gemini ate everything right up ― from his dog food to fruits and veggies like tomatoes, celery and carrots.

While he gained some much-needed weight and worked on his social skills, Gemini also learned to cope with separation anxiety. He’d already been abandoned once, and would panic and scream for attention each time he was left alone in his crate or anywhere else in the house. But Gemini soon learned that alone time meant food puzzles and other tasty “busywork” treats, such as stuffed Kongs. He also noticed that he was never left alone for very long. Someone was always going to come back for him. 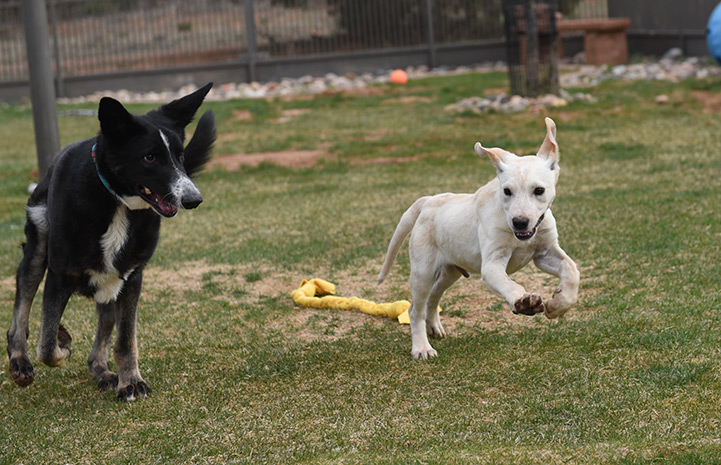 With enough love and reassurance, Gemini began to let his true personality show. He learned that playing with toys was fun, and soon he was entertaining himself quite well. He started basic training and was eager to work for treats. Learning important cues like “leave it” and “sit” helped him gain self-control. He became a whiz at solving food puzzles and other problems. He started walking on a leash and riding in a crate in the car.

Best of all, Gemini went from defensive to affectionate with people. He snuggled right up to his foster mom on the couch, and he loved to sleep in his bed next to hers. Each morning when he woke up, he would do the cutest little yawn and stretch. In only three weeks his life had changed dramatically, and he was ready for his next chapter. 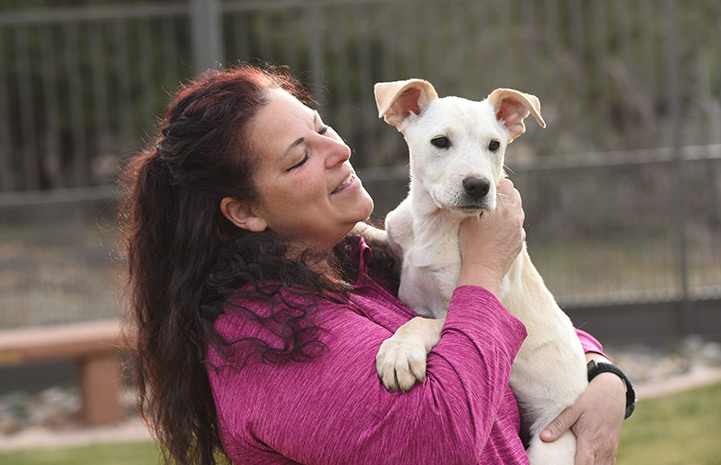 Soon it was time for Gemini to move to Dogtown’s puppy preschool. This is where Dogtown’s youngest students start learning the skills they’ll need to be successful in life. After having some time to recover both physically and emotionally from what he’d been through, Gemini was ready to be a good student.

“Gemini has changed so much from the time we first got him until now,” Dogtown manager Chris Vergallito says. “He has a huge amount of potential and he is very smart.” 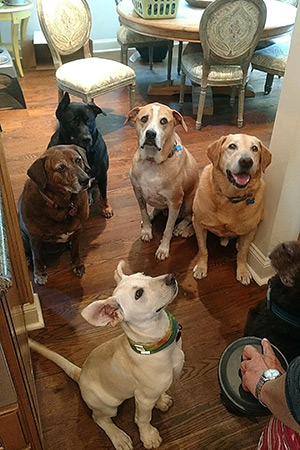 Of course, puppy preschool students are so adorable that many of them are adopted before they ever “graduate” or move to other areas of Dogtown. Gemini was no exception. After a short time at the Sanctuary, he found a home with Jackson Frazier in Florida.

“Gemini has been doing so well at his new home,” Jackson says. “It took him less than an hour to warm up to my large dogs, once we got home. He's been spending his days sunbathing and running around at the beach and in our backyard. I absolutely love the little guy, and he's been such a great addition to our family.”

After a harrowing beginning to life, Gemini’s journey from abandoned puppy to beloved family member was complete.