Image
Shinji beat both panleukopenia and a life-threatening heart defect like a champ, and finally he's on to the business of being a kitten.
By Nicole Hamilton

When you first meet Shinji, a beautiful gray cat with striking green eyes, it’s hard to believe that his life hung in balance, twice. First, it was from panleukopenia, a serious life-threatening virus discovered by the team soon after he and his four siblings arrived at Best Friends in Utah.

Shinji beat panleukopenia like a champ, only to be later diagnosed with a heart condition that eventually required surgery. But the thing to remember about Shinji is that he’s a formidable little fighter. In fact, the hardest part of his journey back to health came after his big surgery was behind him. Let’s just say the words “bed rest” and “kitten” don’t really go together (more on that later). 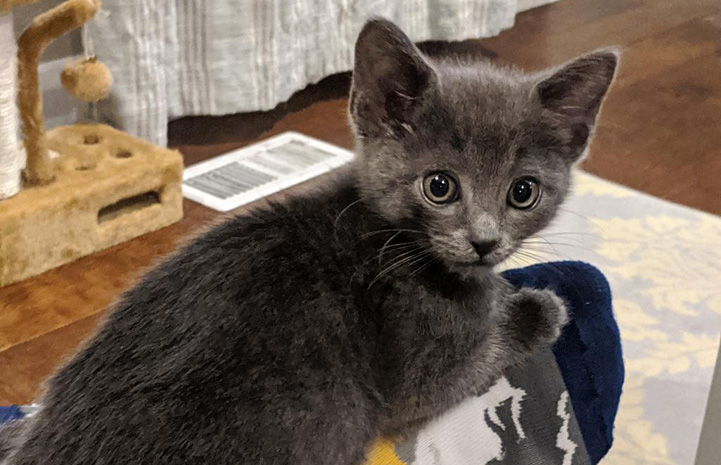 Shinji and his siblings were just a few weeks old last August when they ended up in a Salt Lake City shelter. From there, the litter was brought to Best Friends.

The kittens went to a foster home together, where they were going to stay until they were big enough to be spayed or neutered and then adopted. But after a few days in the home, the foster volunteer noticed the kittens were losing weight and vomiting ― not good. So the kittens were brought back to Best Friends, where they tested positive for panleukopenia. From there, they remained under the watchful eye of the lifesaving center’s medical team.

“Several of the kittens struggled during this time, but because the foster was quick to alert us to their issues and our staff and volunteers are so dedicated to every animal in their care, all five kittens survived,” says Danielle Barnhart, Best Friends coordinator of lifesaving outcomes in Salt Lake City. After they finished treatment and were eating on their own again, the kittens were ready to go back into foster homes. 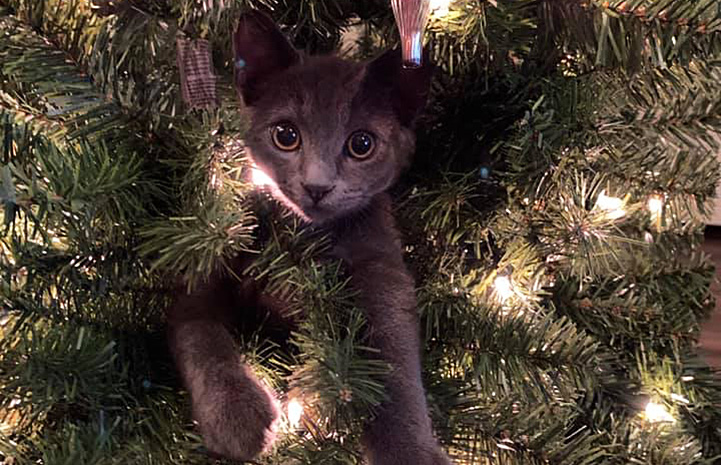 Big help from a foster mom

It’s around this time that Shara Lopossa first saw Shinji. She had been planning to take a break from kitten fostering ― that is, until she saw a photo of Shinji hanging out on the back of a chair and she called to see if he was available.

While talking with the foster team via Facetime, she saw him trying everything possible to break free from his cat kennel. Her heart went out to him, so she cut the call short, hopped in her car and went to pick him up.

There was, however, one thing the foster team made Shara aware of: Shinji had been diagnosed with a heart defect called patent ductus arteriosus (PDA), a condition that causes the heart to work overtime and eventually can lead to an enlarged heart and congestive heart failure. This was something Shara would need to keep an eye on until the medical team retested him in three months to see if his condition improved.

In the meantime, Shinji had a whole lot of fun at Shara’s place. He loved cuddling with her and her roommate, as much as he loved to play fetch with his pom-pom balls (OK, maybe almost as much). And if they didn’t keep their bedroom doors open at night, Shinji would cry at the door and wake them up so he could sleep next to them.

Things were looking good for six-months-old Shinji until Shara took him in for a checkup. That’s when an echocardiogram showed that his condition had worsened to the point that his heart was already beginning to enlarge. The cardiologist’s recommendation was heart surgery.

Surgery likely saved his life, according to Best Friends veterinarian Dr. Megan McCarthy. She says that without the surgery, dogs and cats with PDA have a very poor long-term prognosis and are at risk of death at any time due to heart failure.

Over the course of a couple of weeks, Shinji had several consultations with the cardiologist and veterinarians. Then came the big day when he went in for surgery, which was a success. Once again, Shinji had come through a difficult medical situation with flying colors. He’s one tough little guy. 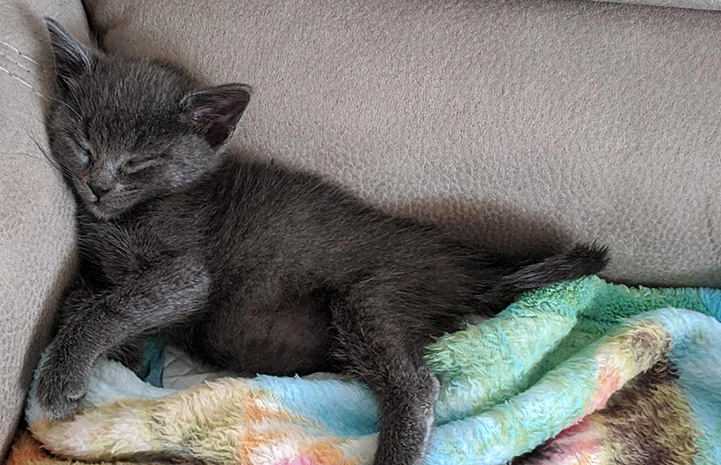 With his heart surgery a success, Shinji returned to Shara’s home. But he wasn’t in the clear just yet. In fact, in some ways the work was just beginning because for the next 14 days, he had to remain in a small cage or securely in Shara’s arms. There could be no playing and certainly no jumping. To heal from the heart surgery, Shinji would need to be as inactive as possible for two weeks.

The first week wasn’t so bad as Shinji slept quite a bit due to medications. But as Shara began to taper off the medicine, Shinji’s energy returned. Around day 10, he was ready have some fun. He is a kitten, after all.

Luckily, Shara works from home, so throughout the day she could check on him to make sure he was as comfortable as possible in his little space and it wouldn’t be long until he was cleared to move freely about his foster home.

As you might imagine, Shara was relieved when Shinji no longer needed to rest, but she was also a bit nervous and watched him closely. When he developed a lump under his skin, she contacted Best Friends right away. The lump ended up being benign, but it showed Shara just how much she’d grown to love him. Still, she decided that adoption wasn’t the best idea for her or for Shinji. She felt Shinji needed a feline friend to have fun with, and that’s just what he got. 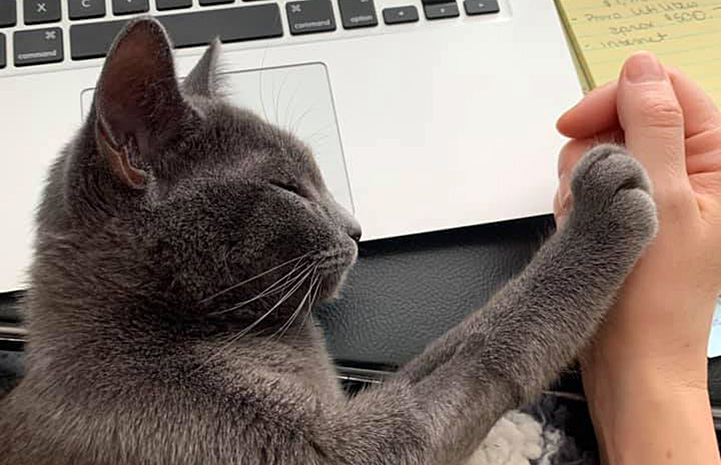 It wasn’t long after Shinji healed from his heart surgery that he caught the attention of Alyssa Hernandez Coria and her boyfriend, Kyle. Frequent visitors to the Best Friends website, they were looking for a buddy for their cat, Slim Shady.

A few days after learning about Shinji, Alyssa hopped on a video call with Shara, a Best Friends team member, and Shinji. They discussed the heart condition, the surgery and ways Alyssa could help Shinji stay healthy. While he would need follow-up testing in a few months, there were some small but important things she could do, such as regularly brushing his teeth. By the end of the call, Alyssa’s mind was made up. She and Kyle were ready to adopt Shinji. 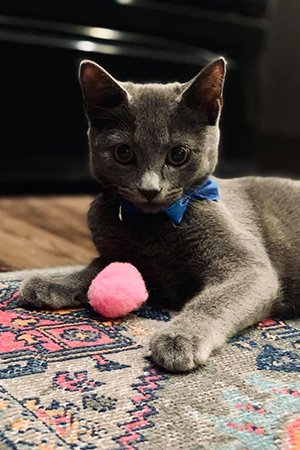 Today, Shinji absolutely loves his big brother, Slim. “He’s playing and constantly running around the house,” says Alyssa. “You would never know he had any medical issues whatsoever, because he doesn't act like it at all.”

Alyssa says Shinji has taught her a lot about patience because, well, as she puts it: He’s the boss, but he isn’t always a tough guy. “If he doesn’t like something he’s going to let you know it,” she says. “If he senses you’re sad, he comes up and just cuddles.”

Shinji may have only tipped the scales at just a few pounds, but he left a huge impression on Best Friends volunteers and staff, including Dr. Megan. “Shinji is such a sweetheart and we were all so happy his surgery was a success,” she says.

For Shara, learning that Shinji is doing so well in his new home has brought her comfort (If you’ve ever fostered a pet, you know that sometimes saying goodbye can be hard.) Today she looks back and knows she played a big role in making his new life possible. “It was hard to let him go, but knowing he’s so happy makes all the difference,” she says.

Whether you volunteer, foster or adopt, you can make a big difference in the lives of pets where you live.