Help for a dog afraid of men

Image
Big black dog overcomes fear and gains confidence at the Sanctuary with meeting new people, especially men, whom he has been scared of in the past.
By Christelle L. Del Prete 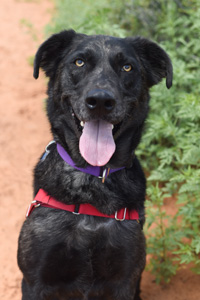 With all the clever tricks he learned before coming to Best Friends, plus those he’s learned since, Charles should have self-confidence galore.

Say “Shake, Charles,” and he’ll immediately give you his paw. If he’s offered a treat, Charles works for it by sitting pretty on his hind legs. And, with his smarts and his excellent sense of smell, he’s fantastic at nose work (a fun search and scenting sport). It’s no surprise he acts like a professional. As a graduate of a dog training program in a Tennessee prison, he has impressive credentials. But behind his intelligence, Charles has a secret — one that, so far, stands between him and a home. But the staff at the Sanctuary figured out Charles’ secret, and they’re helping him get past it.

A dog scared of men

The first thing Dogtown trainers noticed about Charles is that when strangers walk up to him, his self-confidence wavers. Instead of greeting new people, he freezes in place or barks his big, booming warning. While Charles warms up quickly to female visitors, he takes a little longer with men, and that sometimes leads to misunderstandings.

You see, Charles is a big dog, and while he puts on an impressive show that says, “Stay away from me, you scary stranger,” it can make people uncomfortable. And that just makes things worse.

Sensing fear or uncertainty in new people seems to make Charles think, “Well, if he’s nervous about me, maybe I should be nervous about him.” So he makes himself look as big and bold as possible. Then people back away, thinking that he is being unfriendly, when Charles is really just afraid — not a good situation for him, or for new people he meets.

Sanctuary staff made it their mission to help Charles overcome his fears. To accomplish that mission, they would need the help of as many friendly guys as they could find. So male volunteers became Charles’ new best friends — eventually. 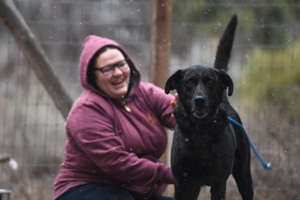 ​Dogtown staff arranged for male volunteers to do short meet-and-greet sessions with Charles through his fence. At first, all they had to do was to toss some yummy treats over the fence and then walk away. As Charles got used to these visitors, he realized that every time a new guy came around, only good things happened. As time went on, the visitors were able to stand in front of Charles a little longer without scaring him, so they gradually increased the face-to-face time.

Finally, Charles felt safe enough to sit nicely when his visitors asked him to. But he also had to get to the point where he felt safe without a fence between him and them. The true test would be whether or not he could step out from behind the fence and approach a male volunteer without losing his nerve.

Dog gets more comfortable with men

To help him succeed, Charles’ caregivers turned the situation into a game. A male caregiver standing inside the dog’s yard, along with a male volunteer sitting in a golf cart outside the fence, took turns tossing him treats. Then the caregiver put Charles’ leash on and walked him out of his yard. Though this was no ordinary walk through Dogtown, Charles didn’t hesitate. He strutted up to the golf cart and hopped right into the vehicle beside the man.

The golf cart wasn’t moving, but in that moment, Charles turned a corner. He had worked hard to finally regain his confidence. Of all the cool tricks Charles has learned so far in life, this one tops the list, because it marks the beginning of the end of his fears.