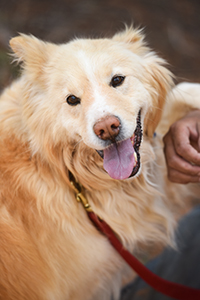 With his fluffy, golden fur and the big, wide smile that set his handsome face aglow, Bodin looks a lot like a teddy bear. And, most of the time, he’s an amazingly loving, sweet and cuddly dog. But Bodin had some rough edges, and food is one of his “sore spots.”

The nine-year-old golden retriever mix was rescued from a hoarding situation. Although he was in good shape physically, Bodin carried with him some heavy baggage that reached far back into his past. He wasn’t shy, and would bound right up to people to say hi. But his friendliness had limits, and he needed help with that.

Boiling down food guarding in dogs

Whenever food entered the picture, Bodin wanted people to steer clear. He was prepared to fight tooth and nail to protect his food and treats because he’d gone hungry in the past.  People who didn’t understand food guarding in dogs thought that Bodin was acting aggressively. Because of that stigma, his life was at risk. But at Dogtown, trainers and caregivers have helped many dogs who guard their food. So once Bodin arrived at Dogtown, staff was prepared to help him.

Bodin’s food issues all boiled down to trust — or, rather, a lack of it. The reason he was acting like a dog aggressive with food was that he didn’t trust people to give him what he needed to survive. He also didn’t feel comfortable enough with them to let them touch his stuff. That made Bodin’s relationships with people (and thus his life) pretty rough. He felt he had to be on guard and in defensive mode. Because he really didn’t know what people were up to or if his needs would be met, he could never fully relax.

While there’s no real cure for food guarding (and Bodin might always be protective of his bowls), that doesn’t mean mealtimes have to be so stressful for him. Dogtown caregivers started from the ground up to earn Bodin’s trust and to form a bond with him. Building a trusting relationship would go a long way toward helping Bodin understand that people aren't out to take things from him or to steal his food.

To build that understanding, Bodin’s caregivers spent lots of time with him in calm, quiet areas, treating him to food puzzles and teaching him how to do trades. When he was finished getting all the morsels out of his food puzzle, his caregiver would offer him a treat in exchange for it. While he was eating a meal from his bowl, caregivers would stand a comfortable distance away from the bowl, toss treats into it, and then trade a treat for the bowl once it was empty. 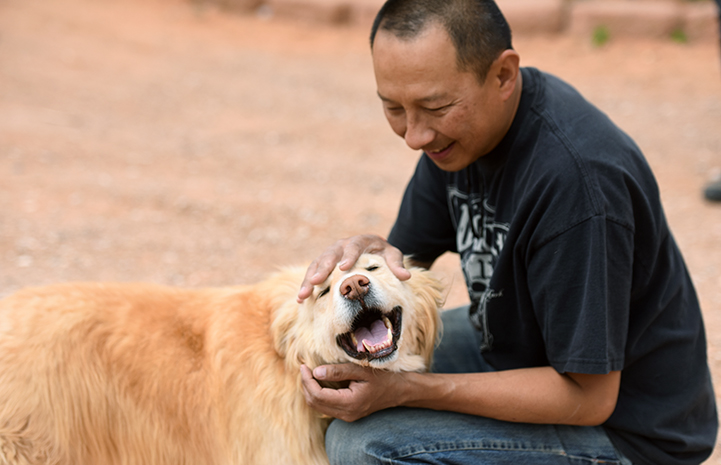 Fairness and respect for a dog

Because Bodin’s caregivers always treated him with fairness and respect, he gradually became less wary of them. He got comfortable doing trades and came to see it as a fun give-and-take game rather than a desperate battle for survival. While Bodin still has clear boundaries around food and prefers to have a good amount of personal space at mealtimes, he no longer feels like he needs to choke his dinners down for fear that they’ll be taken away before he can eat his fill.

And once all the breakfast or dinner plates are completely cleared away and Bodin feels totally safe, his “sore spots” fade away. Then he goes back to being his very best self — a dog who’s adorably sweet and huggable, just like a teddy bear. 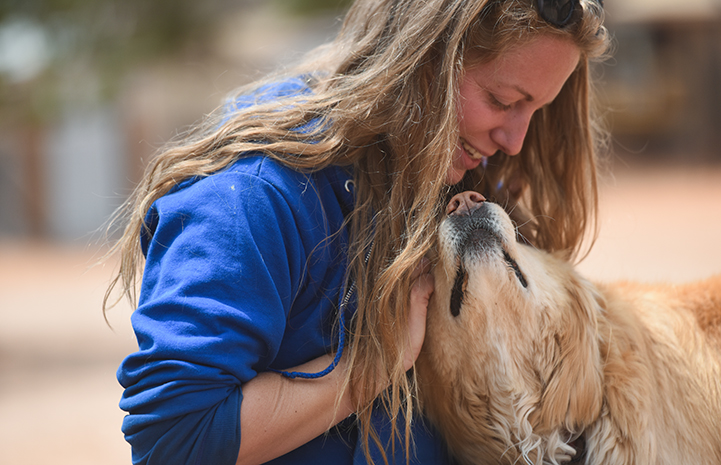 Help dogs like Bodin find healing and happiness. Here’s how: