His name is Holy Moly, and that’s what people might have shouted if they’d seen him at the end of a leash just a few months ago. The two-year-old dog acted more like a shark snagged on a fishing line than a dog going out for a stroll.

Holy Moly has always been affectionate and snuggly, while he’s in his room with his caregivers and a doggie roommate. But he wasn’t able to control his energy outside of the building, and in his frustration, he lashed out at the first thing he could grab: his leash. 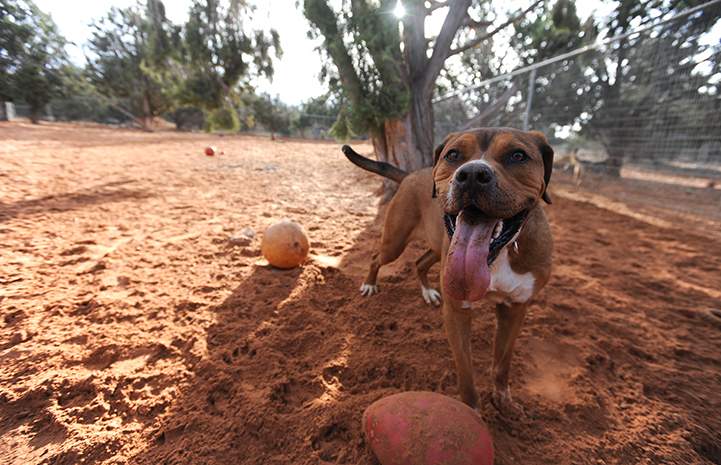 All his caregivers wanted was to let him stretch his legs and enjoy the sights and scents on one of the many Dogtown trails. But Holy Moly wasn’t having any of it. Biting at the leash had started out as a game to him, but soon it became an obsession that caused him mayhem and kept him off the trails.

Such behavior wouldn’t endear him to potential adopters, either, since most people expect to be able to leash up their dog and go for a walk. And because he was so focused on biting his leash, he missed out on all the interesting sights, smells and sounds out on the trail. He needed to break his unhealthy habit, and he needed help doing it.

Get help with dog behavior issues 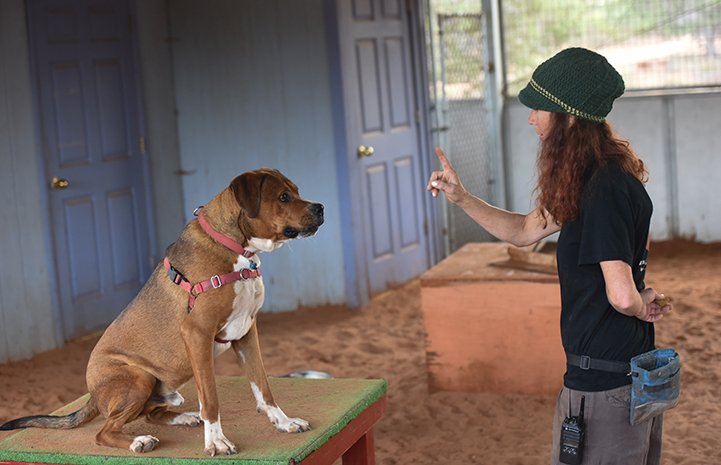 The mission: stop dog from biting leash. The first priority: making sure that Holy Moly actually felt well enough to walk. He has degenerative joint disease, an incurable condition that causes joint pain in dogs. Without treatment, Holy Moly could experience aches and pains that would make walks a lot less fun to begin with.

Since Holy Moly arrived at the Sanctuary from a humane society in North Carolina, he has been getting excellent care from the Best Friends medical staff. In addition to receiving medication to soothe the tenderness in his joints, he attends weekly rehabilitative dog hydrotherapy sessions to keep his legs and body strong.

It’s worked so well that Holy Moly is able to leap up, over and through many of the obstacles at Dogtown’s indoor agility course. There was no reason why Holy Moly would feel any physical discomfort during his walks.

Biting at the leash just seemed to be one of the obsessive behaviors that the dog picked up before he was brought to the Sanctuary. He has a few of these quirks, including chewing compulsively on a ball.

Behavior medication has helped him ease up on the obsessive behaviors, and it also has helped smooth out his training sessions. Holy Moly has also done lots of work with caregivers in order to discover the simple pleasure of walking. 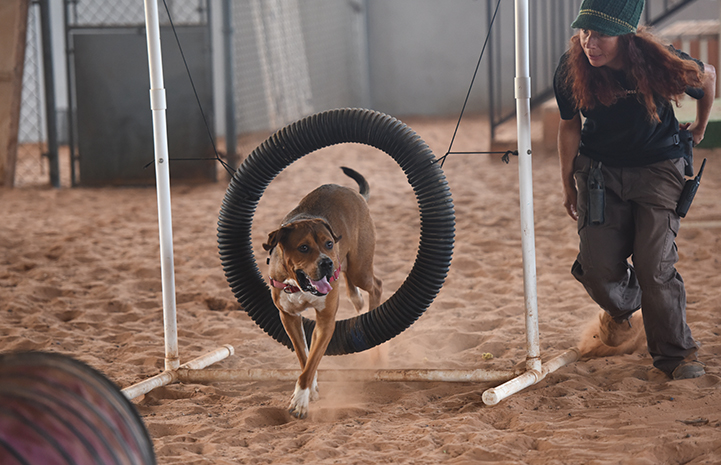 Turning tug into a game

Since he was already having vigorous tug-of-war battles with his leash, Dogtown trainers and caregivers turned it into a purposeful game that eventually helped him to permanently drop the leash. First, they taught him a tug-and-drop game without his leash on. He’d tug on a toy and then drop it on cue. Over and over, he practiced that simple thing: tug and drop.

When he got really good at that, caregivers took away the second leash and let him carry the toy in his mouth while out on the trail. All the while, Holy Moly was learning to pay more attention to the person who walked him and less attention to things that made him anxious, such as unfamiliar dogs. Finally, after months of practice, he was ready to try walking without the toy.

Seeing Holy Moly out on his walks now might make one say “Holy moly!” for a very different reason. There’s no thrashing around or chewing on the leash. Instead, Holy Moly has found joy in doing what dogs do: trotting alongside caregivers on the trail, enjoying the fresh air and sunshine, and taking in all the sights and scents of his world. 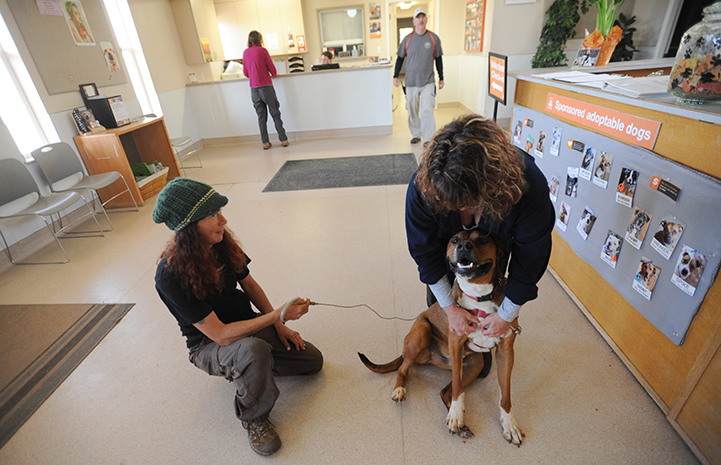