Image
Cat who kept running out the door gets outlets for his adventurous spirit and frustration: clicker training, walks on a leash, and golf cart rides.
By Christelle L. Del Prete 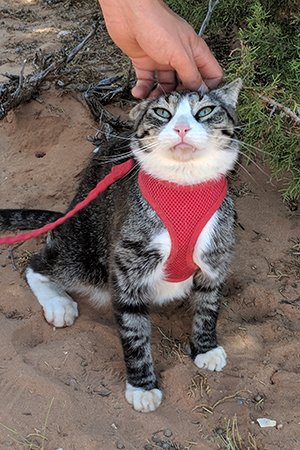 Plenty of cats would be perfectly content to live in a tiny home with a window to gaze out of and a lap to curl up in. Six-year-old Tigger is not one of those cats. His natural curiosity, energy and desire for human attention can quickly turn into boredom, and he finds ways to entertain himself — usually by escaping through whatever door he feels is holding him back from his best life.

While it’s true that Tigger needs more adventure than most cats, he can get himself into situations that make him anxious to the point that he’ll scratch and bite. When his life is plenty exciting and interesting (but in a safe way), his behavior improves greatly. That’s why caregivers at Cat World are giving Tigger everything he needs to keep him happy and not so focused on door-dashing.

Before coming to Best Friends, the handsome tabby-and-white cat lived with a person in an RV park. Due to an injury, Tigger’s person was unable to give Tigger enough physical exercise or mental stimulation, so the clever cat figured out other ways of keeping himself entertained. He kept escaping and wandering around the RV park.

That created a dilemma for Tigger’s person: How can someone help a cat trying to constantly escape outside when he or she can’t physically give the cat the attention and enrichment he wants and needs? And what happens when the neighbors get concerned when a cat keeps running outside so much that he seems to be a stray?

Clearly, life in the RV park wasn’t working for Tigger. By the time he came to the Sanctuary, he was already an accomplished feline escape artist. Once he settled into his room at Cat World, he learned how to get out of that, too. Fortunately, the buildings at Cat World are secure, so Tigger couldn’t run outside and disappear. Instead, he waited until someone opened the door of his room, and then — seeing his chance — he’d dash out into the lobby.

How to keep cat from running out the door

It can be dangerous when a cat “door-dashes,” especially if he’s going from a place of safety and familiarity to one that is less safe or less familiar. And when a cat keeps running out the door and finding himself in a place that triggers anxiety and causes inappropriate behavior (like Tigger did), it’s a significant challenge. 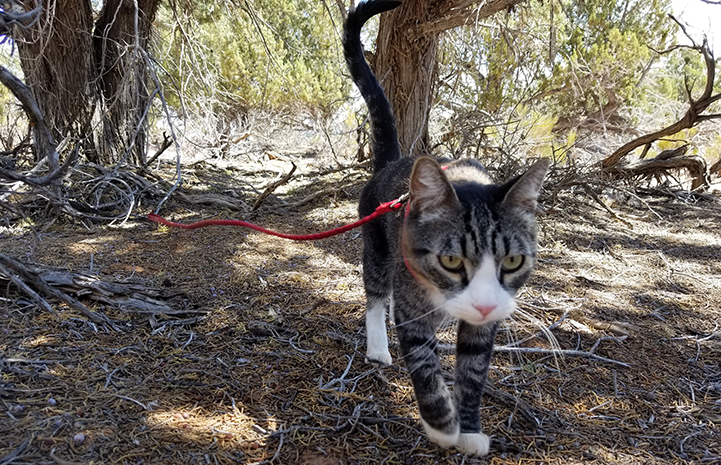 The lobby really wasn’t where Tigger wanted to be. Unfamiliar cats and new situations make him feel unsettled and upset. While Tigger doesn’t particularly love other cats, he was getting used to the ones in his room. But the cats in the lobby were new to him and made him more nervous. When he dashed out into the lobby, he also found himself in a busy, bustling place where caregivers were cleaning, preparing food and medication for the cats and greeting the many visitors and volunteers who come and go throughout the day.

All the commotion made Tigger feel so agitated that, whenever someone tried to pick him up to take him back to his room, he’d lash out with his teeth and claws. His redirected stress and frustration sent a clear message: He desperately needed time each day to explore the world outside of his room and to satisfy his curiosity. He also needed a way to do it that would keep everyone happy and safe.

To help, Tigger’s caregivers designed a behavior plan to reduce his anxiety, give him the socialization and adventure that he craves and teach him skills that would allow people to handle him safely. First, with the help of a clicker, Tigger learned to walk willingly into a cat carrier. This way, when he escaped his room, he could be taken back safely and securely in the carrier with no additional stress.

Next, Tigger learned to walk on a harness and leash, and to ride in a cat stroller. Caregivers began taking him outside at the same time each day for stroller rides or walks on a harness and leash. Tigger is a smart cat, and he soon learned that he had an adventure to look forward to every day at 11 a.m. That stopped him from door-darting before that time. And because he usually felt satisfied after an outing, it kept him from dashing out of his room for the rest of the day.

Learn how to walk a cat 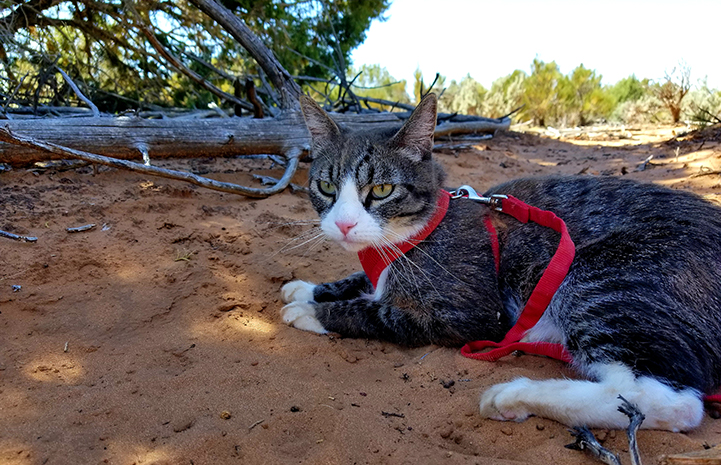 After learning to use a cat carrier, then a kitty booster seat with a leash clip, and then (after several weeks) just a cat harness and leash, Cat World caregiver Levi Myers taught Tigger to ride on a golf cart.

While golf cart rides for dogs are a favorite activity in Dogtown, they’re not as common in Cat World. But Raed, one of the Sanctuary’s most iconic cats, loved them and found them endlessly entertaining, so Levi thought he would try them with Tigger.

Although he was unsure at first, Tigger now looks forward to his daily golf cart rides. They just might be his favorite activity, as well as being a great reward for his good behavior. He’s gone from peeking cautiously out of his carrier to sitting on the seat beside his caregiver, or jumping onto Levi's lap and putting his paws up on the steering wheel with his face in the wind. Halfway through the golf cart ride, they stop in a quiet place so that Tigger can have a good walk and a chance to roll in the sand.

“For Tigger, the most important part of the adventure is structure,” says Levi. “When he gets his Tigger Time, he's generally chill for the rest of the day. He’s the kind of cat who’ll probably always need a regular routine of daily interaction and adventure, but he's made massive improvements.”

He’s certainly gained more confidence in the months since his training and outings began. During his walks, he used to hunker down nervously whenever a car passed on the nearby road. Now he barely reacts at all. At the end of his walks, if he’s strayed too far from the golf cart, Tigger allows his caregiver to pick him up and carry him back to their ride without acting out in any way.

And back in Cat World? “When we come back from his adventures, he’ll walk right into the building and into his room,” Levi says. “While he’s in his room, he’s no longer antsy or ready to dart out the door.” 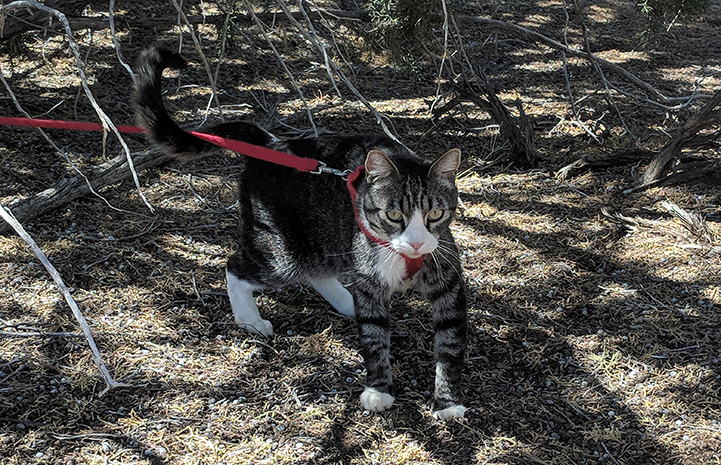 The next place to take an adventure cat

At the end of each adventure when he’s safely back in his room and his harness is removed, Tigger gets treats to help end the session on a positive note and help him understand that what he just did was good. Then he can relax and look forward to the next day’s outing.

While Tigger Time has turned the tide against the cat’s door-darting and redirected frustration, he still has behavior challenges. He'll always needs structured outlets for his energy and adventurous spirit. But when he gets what he needs, he's truly happy.

So when Tigger does find the right home, his new person won’t be asking, “Why does my cat run outside?” Rather, the question will be: “Where’s the next place that I want to take my cool adventure cat?” 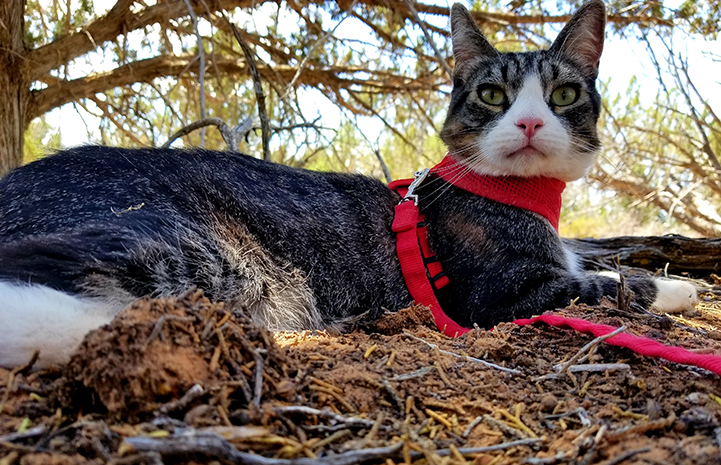