Image
Mitzy had given up on life, but she’s happy and healthy again at Best Friends.
By Christelle L. Del Prete 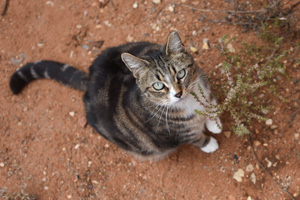 ​Mitzy is a true diamond in the rough. For her, the “rough” was a shelter in California, where the tabby was just one of many cats overshadowed by other more outgoing cats. Now that she’s safe at Best Friends, she’s finally gotten her chance to shine — and boy does she ever!

Though she had almost given up hope, Mitzy is feeling a whole lot better these days, and she’s even helping other cats feel that way, too.

Before she came to the Sanctuary, Mitzy lived in a California shelter where she kept getting overlooked. That’s because, aside from the pretty half-brown, half-white markings on her nose, nothing about Mitzy really stood out — except for her size.

Whether it was because she wasn’t comfortable in a shelter environment, or because she became a bit depressed as the months and years went by (with no sign of a forever home), Mitzy didn’t move around much. As a result, the eight-year-old became quite overweight.

She had even developed painful sores where her stomach hung down and rubbed against the floor. Instead of greeting visitors and potential adopters coming through the shelter, Mitzy hid quietly in a corner. The poor cat seemed resigned that this was to be her life. But that was about to change.

Mitzy’s chances of getting adopted were slim, and her health would likely worsen as time went on. So she came to Best Friends, where getting her back into tiptop shape and restoring her confidence became the number one priority.

Best Friends staff got Mitzy settled into Cat World’s veterinary clinic area, where they would treat her wounds. As she was getting fixed up and ready for her new life, she quickly won the hearts of vet techs, and that landed her some prime real estate to call her home between homes.

While the Sanctuary has special housing areas catering to cats, all areas (even those designed for people, like offices, kitchens or lobbies) are fair game. In fact, some cats thrive living in an office or lobby. That’s how Mitzy ended up moving into the lobby at Hope House, the Sanctuary’s feline veterinary area. With all the people going to and fro, living in the lobby certainly gave Mitzy many chances to brush up on her rusty social skills.

Once she no longer felt the need to hide, Mitzy became a social butterfly. And, because she enjoys greeting visitors and exploring the large lobby so much, Mitzy is moving around a lot more these days. She even gets time each afternoon to leave the clinic on her harness and leash and go for a walk with one of her vet tech friends.

Since coming to the Sanctuary in August, Mitzy’s sores have healed, and she’s lost about a pound, which is a step in the right direction. Most importantly, she’s finally happy, and no longer hiding her life away in a corner.

And now that Mitzy feels better, she’s proven to be quite a caregiver herself. 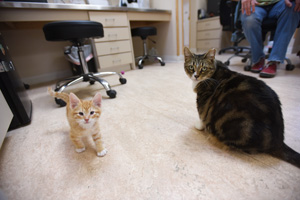 That became apparent recently, when a little kitten named Griffin spent the day in Hope House. He was there for an exam before his adoption, but he didn’t like being in the clinic one little bit, and he let everyone know it with loud, desperate meows.

Mitzy walked over, gently held the little kitten down with her paw and gave him a thorough grooming. Then she entertained him by tossing around a red toy lobster with him. By the time he was ready to set off for his new home, Griffin was having a great time.

In fact, Mitzy’s so good at comforting kittens that she’s earned the nickname “Aunt Mitzy.” “That's what she does. It's her thing,” says Alisa Alexander, Cat World’s medical administrator. And now that she’s got the help she needs to feel happy and healthy once more, she’s shining brighter than ever before, never to be overlooked again.