Help for a shy cat

Image
Skadi the shy kitty learns about friendship and love at the Sanctuary. She slowly begins to accept attention, kindness and petting.
By Christelle L. Del Prete 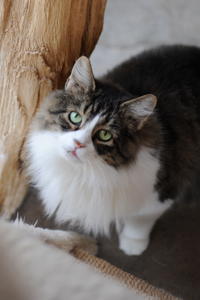 Skadi didn’t know what to make of things when she first came to the Sanctuary. The young cat had been living with another rescue organization, and her life was suddenly turned upside down when she and nine other cats had to move.

All new cats who come to the Sanctuary have a standard two-week quarantine period at Hope House, Cat World’s medical building, to make sure they are healthy enough to live in a group setting with other Sanctuary cats. But while the more outgoing cats in Skadi’s group soaked up as much attention and reassurance as they could get during that time, Skadi was so shy that she hid her face from anyone who came by.

Patience and reassurance for a shy cat

When her quarantine was over, her caregivers hoped she would settle in and be more comfortable in a community living room with other cats, but she spent the first few days in her cat tower (a tall cat cage with multiple shelves for eating and perching). She just didn't seem to be able to make sense of the change in environment.

While she was at Hope House, though, the pretty, shy cat had caught the attention of Cat World caregiver Levi Myers. When she moved into the building where he was working and showed how scared she was, he made it his mission to help her through her difficult transition.

“I spent a lot of time talking to Skadi, sitting next to the tower and petting her,” Levi says. “She seemed fine with human touch, but was terrified of coming out. Through a lot of patience and reassurance, she began to venture out to see me. I would lie next to the tower and talk to her, and she would perk up and slowly move out and curl up against my side.”

Timid cat a wallflower no more 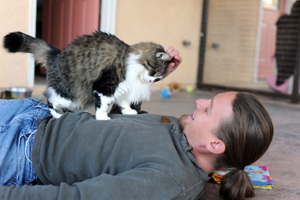 In time, Skadi abandoned the tower altogether and took to the wall cubbies (cozy little cat-sized cubicles anchored to the walls at varying heights). However, whenever Levi would walk in the room and say her name, her ears would perk up and she'd peek out from the cubby to see if it was her new friend. Then she would jump out and race toward him.

No longer a wallflower, Skadi began to follow her caregivers around the cattery, to sit on their laps, and to become more social with visitors and volunteers. She even tested out life in a home when Levi took her on a sleepover. After wandering around his home briefly, Skadi sauntered into the living room and plopped down in the middle of the floor as if she had lived there for years.

Levi says, “She brought a huge smile to my face every time I got to say hello to her. I just wanted to pass on that feeling as best I could to her new family.”

It wasn’t long before that happened — when Skadi got to move into her new, permanent home. A family in Massachusetts adopted her, and by the time that exciting day arrived, thanks to her friend, Levi, Skadi knew exactly what to do.

To help more animals like Skadi go from homeless to home, become a Best Friends member.