Image
Dog who was abused and scared comes to Best Friends for TLC, help, training and healing.
By Christelle L. Del Prete 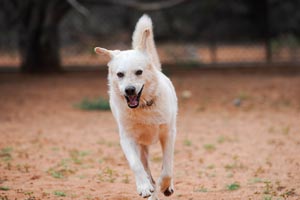 Imagine being a dog who couldn’t enjoy walks for fear of being leashed. This was the problem faced by poor Kronk, one of five dogs who came to the Sanctuary after being rescued from a cruelty case. Even though his life had improved drastically and the world was no longer a frightening place, the mere sight of a leash made him tremble. A simple metal clip and nylon strap stood between him and some amazing adventures.

Kronk wasn’t afraid of being outside of his room or his yard. He wasn’t afraid of people or of being touched by them. All his fears centered on the leash. Just being attached to one was extremely disturbing, causing him to panic and struggle against it.

Increasing trust for one shy dog

Dogtown caregivers wanted Kronk to see the world beyond his room, so they focused on gaining his trust. Caregiver Caley Boone began building a relationship by teaching Kronk to play. Every day, she ran through his yard trying to get him to chase her. At first, he only looked at her strangely, having never seen anyone act this way. Then the clever dog began bouncing and barking whenever she entered his room — his way of initiating the game.

Kronk was also encouraged by lots of tasty treats. For a while, they helped him feel much happier and more confident around people with leashes. But soon he figured out that, whenever people began offering him tasty tidbits, the dreaded leash was about to appear. He became wary and almost fell back to square one.

That’s when his caregivers figured out what was holding him back. Kronk didn’t want any part of the leash touching him — especially if it was long enough to drag on the ground or wrap around his legs. That really freaked him out. So they started clipping him with only a small piece of leash, which he found tolerable.

But he still couldn’t go for walks, so the practice sessions continued. One day Caley decided to take a leap of faith. Acting as if everything was normal, she clipped Kronk with a regular leash instead of the tiny piece, being very careful to hold the strap away from his body, and then calmly led him outside. 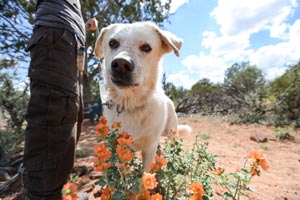 That became the break-the-mold moment for Kronk. The 10-year-old dog acted as if he’d been walking on a leash every day of his life. He knew exactly what to do and heeled perfectly at Caley’s left side.

Kronk now looks forward to going for walks every day. He strolls nicely on the Dogtown trails, stopping in the shade or at the benches for pets and snuggles. He’s even become a bit adventurous, breaking his rigid heel to sniff a tree or a bush, or to pull ahead a little when he gets excited.

Accepting the leash means Kronk can have other adventures too. He’s enjoying short car rides and working on his dog skills by walking 10 feet away from, but parallel to other dogs.

Best of all, Kronk recently went to the Best Friends dog park for the very first time. It was so nice to be able to see him do that, according to regular volunteer Moira Patterson who says, “My heart nearly exploded with joy.”

Kronk also enjoyed sniffing and playing around to his heart’s content before it was time to get leashed up and go home. And now that he’s leash-trained and far less fearful, he’ll have an even better chance of finding a home of his own. Best of all, until then, he’ll be walking happy.

Learn more about Dogtown at Best Friends. You may also be interested in a story about a dog afraid of men who is getting help.