Helping a dog go from reactive to relaxed

Sosa looks just like any other happy, active dog when he’s trotting around Dogtown’s agility course, running up and down the A-frame and leaping over jumps. But it’s not his speed and energy that’s so impressive, but the opposite. Since coming to Best Friends Animal Sanctuary, Sosa’s made the most progress by learning to slow down and be calm. 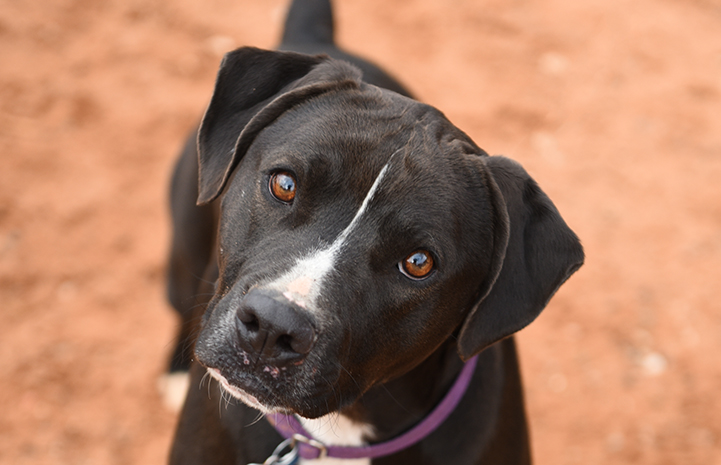 Dog reactivity in a shelter

Dogtown volunteer Jane Weatherford knew Sosa before he came to Best Friends. She’s a longtime volunteer with the Brown County Humane Society shelter in Indiana. Sosa was a stray brought to the shelter by animal control, and Jane worked with him.

She says that when he was outside of the shelter playing in the exercise yard or splashing around a kiddie pool or in the nearby creek, Sosa did great. “But when he was inside the building, Sosa was really restless. It was like he didn’t know what to do with his energy. When he first came to the shelter, he was withdrawn. But then he became really reactive toward people. He was one of those dogs we knew we didn’t have the resources to help.” 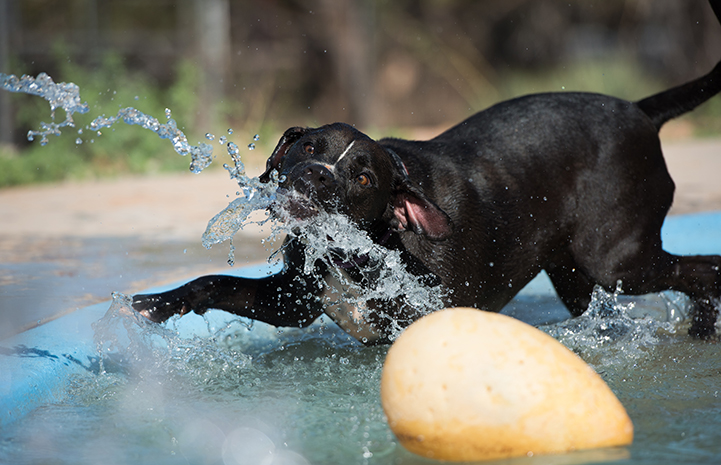 Dog behaviors like leash reactivity and barrier reactivity (picture a dog lunging and barking at people or other dogs through a gate) scares away potential adopters. It’s easy to see why: It can make dog appears aggressive even when they aren’t. A reactive dog may simply be frustrated, overexcited or stressed, like Sosa was. But his behavior certainly wasn’t making a good impression on anyone looking to adopt a dog, so he was brought to Best Friends for help.

A leash reactive dog who can’t stop running the fence

In his early days at the Sanctuary, Sosa showed the same behavior. “He was Mr. Anxiety and always overstimulated,” says Dogtown caregiver Jess Cieplinski. When we would take him out on walks, he’d come lunging out of the building, barking at everyone and everything around him.”

Leash reactivity made Sosa’s walks stressful, but his anxiety didn’t ease up when he returned to his building in Dogtown. Rather than resting in his room, he would constantly be outside in his yard running up and down the fence line as fast as he could and barking frantically at his doggie neighbors on the other side.

Fencing is a type of dog barrier frustration and reactivity that can be physically and mentally unhealthy for a dog. Besides being exhausting, it can cause unnecessary weight loss and injuries to a dog’s joints. “It can be hard to keep weight on a dog who fences, and it’s also a repetitive, obsessive behavior,” Jess says. “Dogs like Sosa get caught up in the moment and are overexcited, which creates mental stress.” 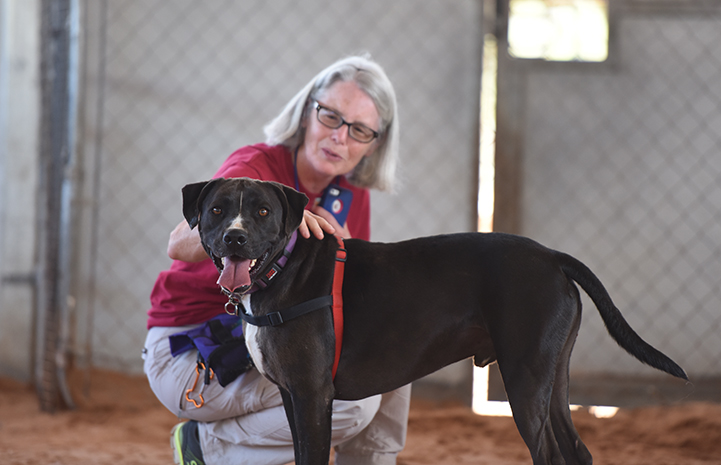 Sosa would get so focused on fencing that he’d even turn down food, walks and attention. If the neighbor dogs weren’t outside, he’d wait and watch to see if one of them would come out and start barking and running with him.

How to deal with dog anxiety

“Instead of fencing, Sosa could be doing something fun, like playing in a kiddie pool or with a doggie friend,” says Jess, who along with other Dogtown caregivers and behavior consultants came up with a plan to deal the anxiety and help Sosa slow down. 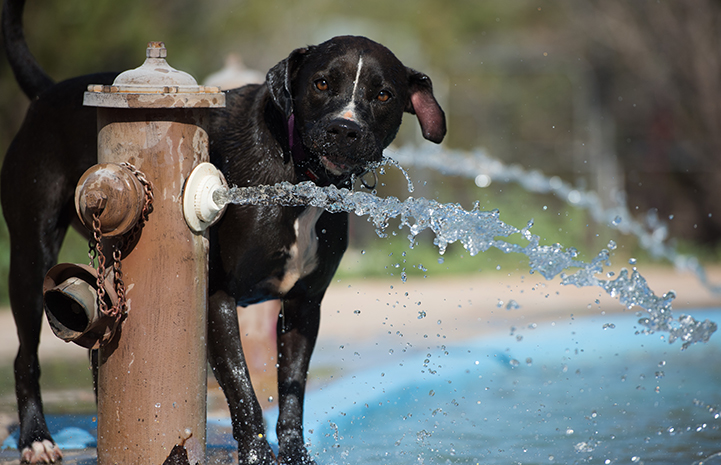 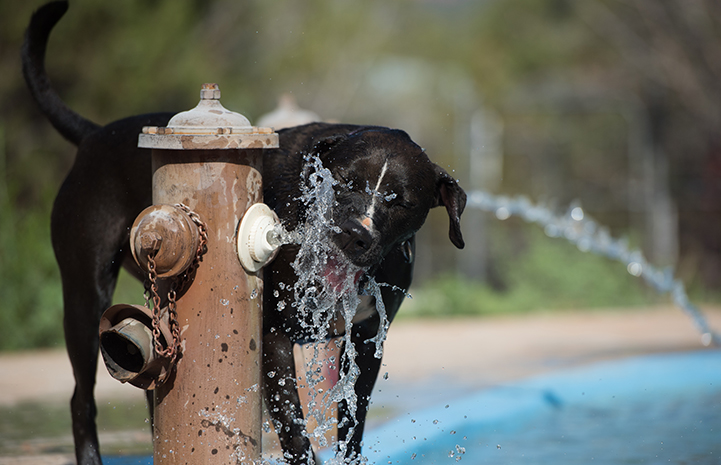 Staff moved Sosa to a different room so that he would have doggie neighbors on only one side of his yard. That helped him tremendously, because he had 50% fewer opportunities to fence with his neighbors. But Sosa also needed constructive outlets for his physical energy and things to keep his mind busy.

Jess started taking him to Tara’s run, Dogtown’s large indoor training and agility facility. That’s where he learned to run up and down the A-frame and to leap over jumps. After his agility sessions, Sosa was tired, which made it easier for him to rest and practice calm behavior when he was back in his room. 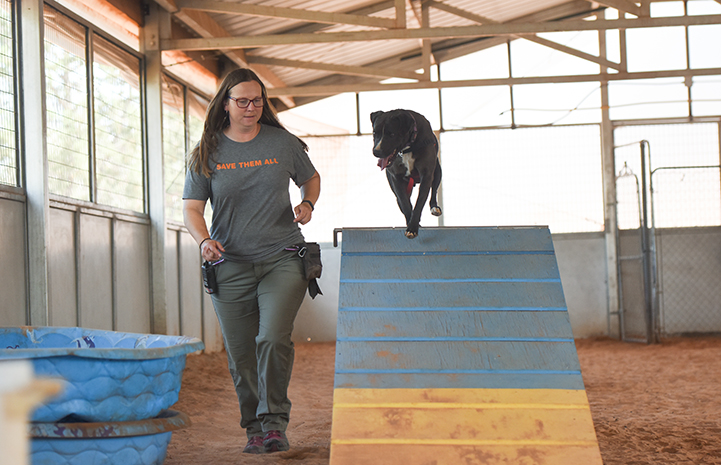 Another thing that helped Sosa was getting a Kong in his crate. Each day, Jess would call Sosa inside and give him a Kong toy filled with peanut butter that had been frozen into a big popsicle. Although his crate door was left open, it would take Sosa a while to get all the peanut butter out, and during that time he was content to stay inside instead of fencing in his yard.

Sosa did this every day for two months and gradually his behavior began to change: He began choosing to stay inside his room on his own. Even after he finished his frozen treat, he didn’t rush right outside again. Sosa was learning what it meant (and how nice it felt) to take a break.

The new calmness followed him outside. Whenever he’d leave the building for a walk, Sosa’s caregiver offered a peanut butter-dipped spoon that he could lick instead of barking. “The magic peanut butter spoon,” as caregivers began calling it, has helped Sosa stay calm while he’s leaving the building, walking on the trails or returning to his room. 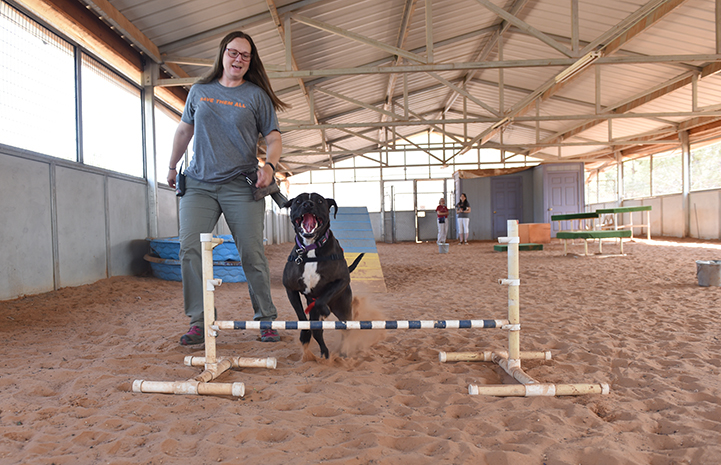 He’s gotten so good at this routine that his caregivers can walk him out of the building and hand his leash (and the peanut butter spoon) over to volunteers, so Sosa can make new friends while getting in some trail time.

Sosa also has a new appreciation for car rides. They used to make him anxious, but now he’s able to relax and enjoy them. It’s just another example of how learning to be calm in one environment can help a dog like Sosa feel less anxious in other situations.

From reactive behavior to relaxed

While Sosa is still working on being calm behind fences or gates, Jess says he’s made some really positive changes. For example, Dogtown caregivers check every dog first thing in the morning and at the very end of the day.

“My favorite things are at morning checks when I open the building and Sosa’s lying quietly at the gate, waiting for me instead of fencing outside like he used to,” Jess says. “At the end of the day, he's resting under the shade tree in his run and I have to go out to him because sometimes he's too relaxed to get up. He’s a different dog now.”

During her volunteer shift in Dogtown, Jane watched Sosa work the agility course with his caregiver and saw the change firsthand. “It’s amazing to see that there is time at Best Friends for staff to work with dogs like Sosa. I’m just all smiles at the progress he’s made. It brings me lots of joy that he’s such a happy boy.” 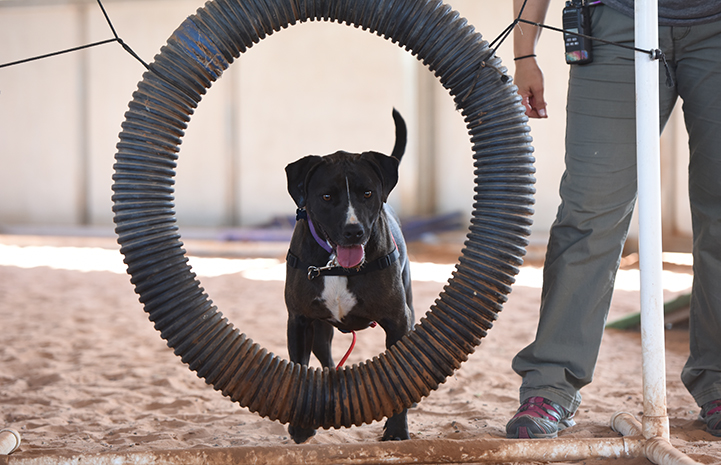 As if to agree, Sosa ended his agility session by crawling under the A-frame instead of running up it. Panting with a big smile on his face, he took a few minutes to rest and relax in the cool sand. 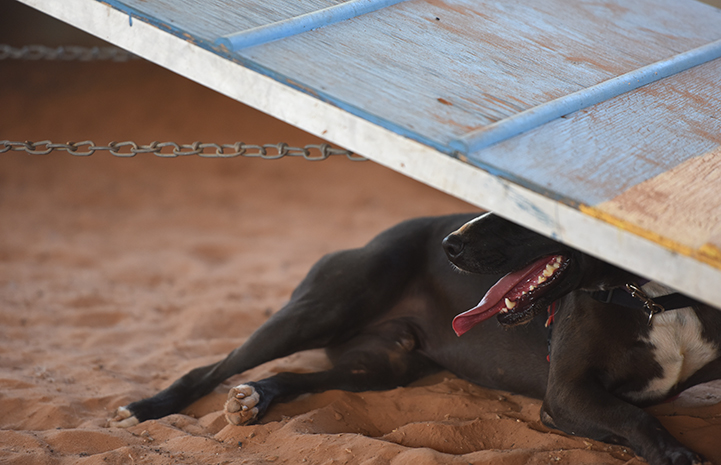