Helping a domestic turkey on the highway

Image
Domestic turkey is rescued after being found wandering along a busy highway in the desert. She turns out to be tame and people-oriented.
By Christelle L. Del Prete

A busy highway in the middle of the desert isn't exactly the safest place for a domestic turkey. It's even more treacherous for a turkey whose wings are clipped so that she can't fly away to safety. But that's exactly where poor Coco found herself on an early morning in mid-September of last year. "She was running around frantically, trying to avoid being hit by the cars," said Adria Johnson, a caregiver in Horse Haven who spotted the distressed bird on her way to work. 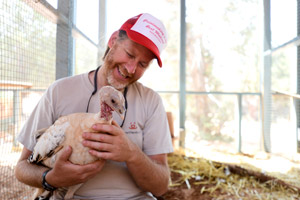 Adria and her husband, Chris Young, who works in shipping and receiving, immediately pulled over to see if they could help. Sally Heins, a vet tech who was also on her way to work at the Best Friends clinic, joined the team as well. In the end, it turned out to be a rather simple rescue operation. The big white turkey was completely tame, and Adria was able to walk right up to her, pick her up, and set her on her lap in the truck.

After a two-week stay in quarantine in Horse Haven, Coco moved to Wild Friends (the wildlife rehabilitation area at the Sanctuary), where she immediately struck the fancy of caregiver Bobbie Foster. Coco is built more like a wild turkey than most of the domestic turkeys raised for meat in the U.S. She's lean and svelte rather than oversized. But Bobbie was particularly impressed with Coco's striking black-and-white plumage - the classic look of Coco's breed, the royal palm domestic turkey. 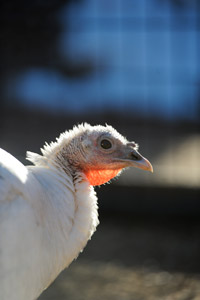 In fact, it was Bobbie who named her after Coco Chanel, the famous fashion designer who favored black and white. Bobbie also points out that Coco (Chanel) was a strong woman, and that the brave turkey deserved a strong name after surviving her frightening ordeal.

But Coco is much more than just a slender figure and some pretty plumage. It's likely that she was once someone's pet because she is so tame and people-oriented. However, no one has claimed her, and no one is sure how she ended up in the middle of traffic. She loves to be held and petted, and, if you sit on the ground, she will sit in dirt next to you so that you can pick her up.

Adria and Bobbie both agree that Coco has a terrific temperament and is one cool turkey. Since her run is situated between those of two roosters who don't normally get along, she serves as buffer and keeps the peace between them. And she once put herself in the path of an angry chicken who was heading straight for Adria's son - a touching, protective move perhaps intended as a gesture of thanks to her rescuer.

Get more information about Coco or any of the other adoptable birds at the Sanctuary.