Image
Exuberant dog, who gets really excited and jumps and mouths people, receives training that helps him make friends for the first time in his life.
By Christelle L. Del Prete 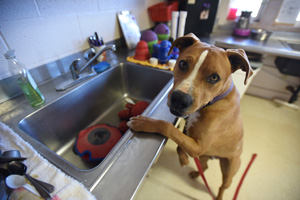 With his big gold eyes and sleek, bronze-colored coat, Guy is a strikingly handsome young dog. But it’s hardly surprising that he wasn’t able to find a home while he lived in a shelter. That’s because Guy didn’t make good first impressions. While he’s not an aggressive dog, he is a big, exuberant boy who would practically bowl over anyone who got close enough to give him pets or affection. And that wasn’t winning him any friends.

So Guy came to the Sanctuary, where he could begin the long process that would help him learn how to change his behavior so he could be friends both with people and other dogs — which is really all he wants. When Guy arrived, he was so overwhelmed with excitement whenever anyone came near him that he’d jump up on people, mouthing their clothing and skin hard enough to hurt. He had a long way to go to reach his goal of befriending anyone. But at the Sanctuary he’d get all the help he needed.

Structure and routine for exuberant dog

Although it's common for young, untrained dogs in shelters to be overly exuberant when they interact with people, Guy also struggled to remember his lessons from day to day. Because he has some weakness in his hind end, he may have had an illness as a puppy (such as distemper or parvovirus) that left him with some neurological issues, possibly causing him to learn at a slower rate.​

Whatever the cause, Dogtown trainers and caregivers immediately began working to help Guy learn how to calm down enough to show his sweet nature.

They came up with structured daily routines and rules — for his safety and that of everyone around him. For example, Guy learned to go to his bed, lie down and stay there while his caregivers cleaned his room. He’d do the same thing when they needed to leash him up for a walk.

A turning point for an energetic dog 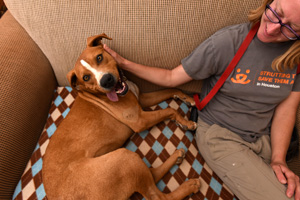 It took six months for Guy to master these skills, and nearly a year for him to stay calm enough to accept human touch. The day he was able to let someone run a hand over his smooth, gleaming fur was a big turning point. He now enjoys love and affection on a regular basis, and he stays nice and calm while his caregivers clean his room or get him ready for a walk.

Still, his training continues. Dogtown caregiver Caley Boone has been helping Guy gain focus. She often brings him outside on a long leash and rewards him for looking at her even when there are distractions, like a passing dog or golf cart. Guy can now walk into the busy Dogtown Headquarters building with his caregiver and sit nicely to accept treats from other staff members and volunteers. That’s a huge step for a dog who used to lose his cool at the drop of a hat.

Guy’s new self-restraint has earned him some canine companions, too. Although he loves other dogs, he used to struggle to read other dogs’ body language, and would keep bugging them by growling, howling or even lying on top of them long after they had signaled that they were tired of playing. Though he’s still a boisterous boy, Guy is getting better at learning to settle down when other dogs indicate that they’ve had enough. He now has two roommates who continue to help him improve his canine social skills.

With plenty of consistency and social therapy, Guy can handle life much better than before, and also enjoy it a whole lot more. Because he now makes much better first impressions, for the first time in his life he’ll get to make as many new friends as he wants.

Bring hope and healing to more animals like Guy by supporting our work.