Volunteer Janice MacMillan helps a fearful dog, who is especially scared of people and cars and doesn't get along with other dogs, gain confidence.
By Christelle L. Del Prete

Janice MacMillan has more than 15 years of experience in animal rescue — and a huge soft spot for dogs like Donner. Donner took Janice’s breath away when she first met her at Best Friends Animal Society. Although Donner is stunning all on her own with her beautiful, long black coat, she also reminded Janice of a shelter dog she had adopted many years ago. The resemblance tugged on Janice’s heart strings and made her want to get to know the dashing dog.

What she learned later made her even more interested in helping Donner. “I’m really attracted to dogs who need extra care, especially the ones with fear issues,” Janice says. When Donner came to the Sanctuary in 2016, she was a timid and scared dog; however, since then she’s made a transformation. And Janice is happy to have been a part of it. 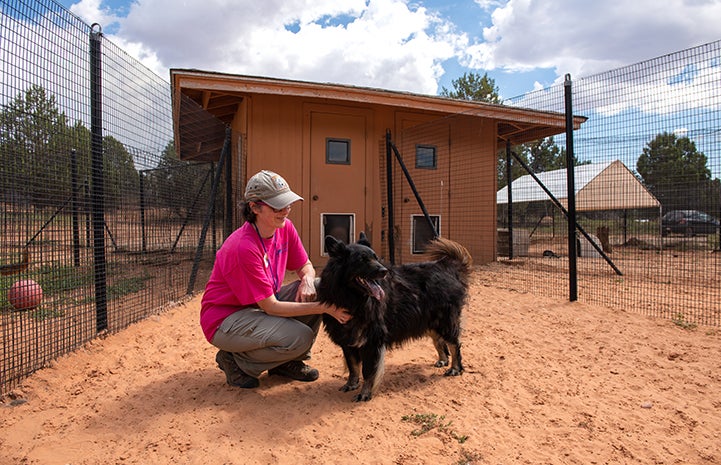 After losing the home she’d lived in for six years, Donner arrived at Dogtown with some challenging behaviors. She was shy and fearful with people, especially with those she didn’t know, and she wasn’t an easy dog to meet or win over. She was also very scared of cars and refused to get in them. To top it off, she didn’t get along with other dogs.

That’s a tall order for potential adopters, but Dogtown caregivers know how to socialize a nervous dog. Once Donner got to know and trust her caregivers, they began helping her expand her social skills. If Donner could gain confidence and lose her fear of meeting new people, it would make her life less stressful and open the door for her to have more friends at the Sanctuary. It would also give her a far better chance of being adopted. That’s where dog-savvy Sanctuary volunteers like Janice stepped in to help.

Janice lives in Massachusetts, but in addition to her full-time job she works part time at the Salem Animal Rescue League in New Hampshire, where for years she had been a volunteer. She’s also fostered more than 75 dogs, many of them with fearful dog behavior or other challenges that make it difficult for them to find the right homes. When she learned about Donner and heard that it would take some extra time to get to know her, Janice was immediately on board.

For their first introduction, Donner’s caregivers leashed her up and brought her out to Janice. As much as Janice would have liked to pet Donner’s soft fur, she knew that Donner would not be comfortable with that. But they had a nice walk together anyway. Going on a successful walk with a complete stranger might not seem so remarkable for most dogs, but for Donner, it was a big deal. Janice recognized this right away. “I felt it was a privilege to meet and walk her,” she says. 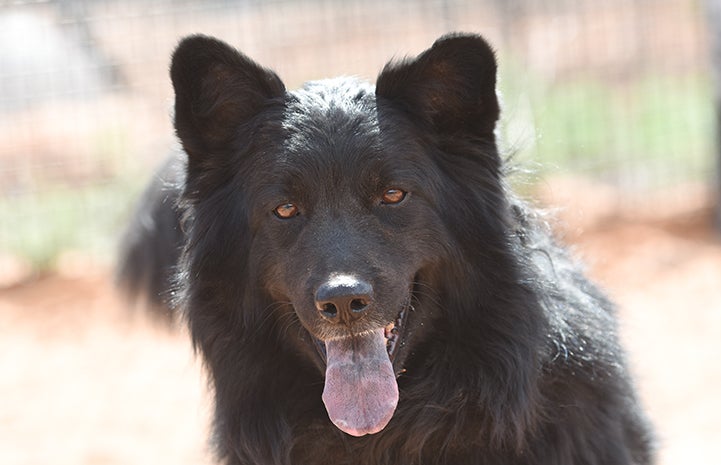 No longer dealing with a fearful dog

After their walk, Janice found she couldn’t stop thinking about Donner. But as much as she loved her, she couldn’t adopt her because she already had dogs at home. Instead, Janice decided to sponsor Donner’s adoption to make it easier for someone else to bring her home. She also decided that if Donner was still at the Sanctuary when she returned, she would make it a priority to work with her again.

On Janice’s next trip to the Sanctuary, Donner was still there, but this time, their interaction was much different. Donner met Janice easily with the help of some string cheese. Janice was also able to put her collar and leash on her, which is something Donner wouldn’t let a stranger do the first time they met.

“She was not fearful,” Janice says, “She even allowed me to pet her, and she licked my hand a few times. It’s wonderful to see small changes as (dogs like Donner) come around. I knew that she was fearful and that with time and the right help, I would see a different dog. Seeing her one year later proved that.”

Donner has certainly made some big strides during her time at Dogtown. Not only has she gained confidence with meeting people, but she’s also improved in other areas of life. It turns out that she doesn’t mind being around cats, and she’s making progress with her acceptance of other dogs being near her. She also lets people she trusts brush her long silky fur, something she was not comfortable with in the past.

Even getting into a car is easy for her now. Returning volunteer Wendy Dapore, who took Donner on a car ride during her most recent visit to the Sanctuary, says, “She did great and seemed to enjoy it.” 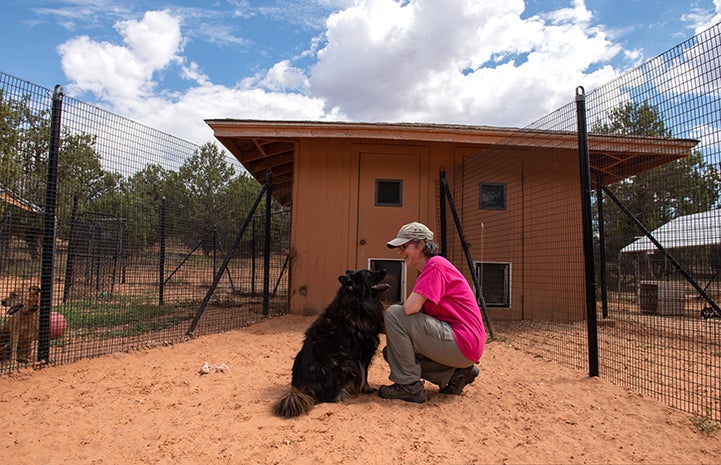 It’s true that Donner will probably never be one of those dogs who can greet Sanctuary tours, allow strangers to rub her belly or live with other dogs. But it’s also true that the confidence she’s gained so far has enabled her to live a full and happy life. Those tiny moments when a dog like Donner takes a treat from an outstretched hand or allows a soft touch under her chin are life-changing. They are also the moments that keep Janice (and volunteers like her) volunteering at the Sanctuary and in their own communities.

“Donner needed extra time that a lot of people don’t have to give,” Janice says. “But dogs like her can really blossom if you put in the effort.” 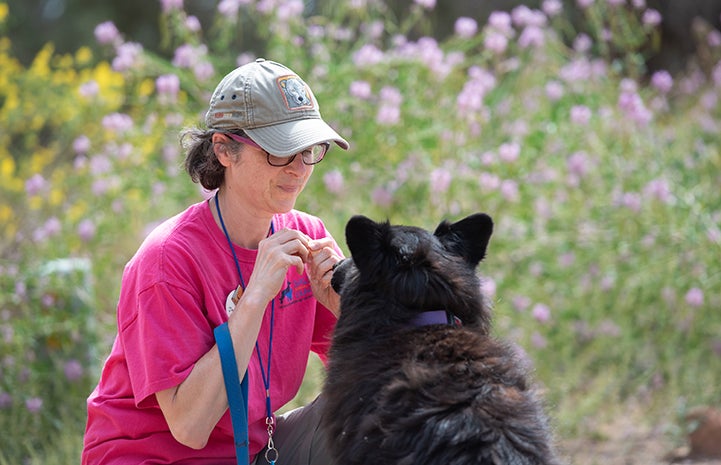