Helping a scared dog who missed out on puppy socialization

Image
Dog missed critical socialization period (between 3 to 16 weeks of age), but her adopters are helping her to become less anxious and more confident.
By Christelle L. Del Prete 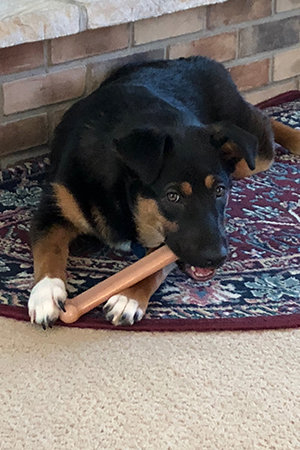 Shadow may never be the kind of dog who feels comfortable enough around crowds of people to approach a friendly stranger and say hello. She may always be nervous in new places and when she’s seeing new things for the first time. Because of her anxiety, she may always need kind, patient people to reassure her that things are OK — and that she is OK. But because of the time Shadow spent in Dogtown’s puppy preschool and because she found such a loving, patient and understanding family, Shadow is the best dog she can be today.

The importance of puppy socialization

At four months old, Shadow was rescued by a Best Friends Network partner and brought to the Sanctuary. While most four-month old puppies growing up around people are friendly, snuggly and playful, Shadow was terrified of everyone and everything. It’s possible that people didn’t leave the best impression on her in the first few months of her life, though that’s not necessarily the case with all dogs like Shadow. Most of the time, antisocial behavior can be traced to a lack of proper socialization.

The critical socialization period for puppies occurs roughly between three and 16 weeks of age. Puppies in that phase are like little sponges soaking up information about the world and learning what is and isn’t safe. By eight weeks old, puppies at Best Friends are being introduced to as many people as possible, because without that socialization puppies can grow up to be shy and fearful of strangers.

At preschool, puppies are also introduced to other potentially “scary” things they will encounter in the world: wheelchairs, bicycles, microwave ovens, vacuum cleaners and even singing and dancing toys. With treats and lots of praise, puppies learn to make positive associations with unfamiliar people and things so they will be well-prepared and confident when they go off into the world.

The effects of lack of socialization 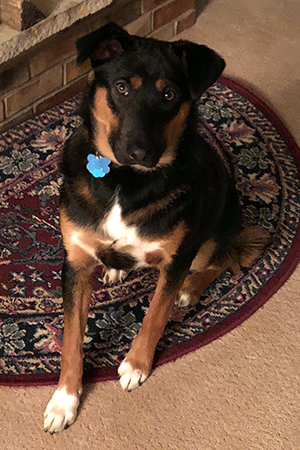 Because Shadow missed that crucial dog socialization training when she was in the most impressionable stage of puppyhood, certain have followed her into adulthood. The effects of lack of socialization, which can include fear and anxiety, impact every aspect of Shadow’s life. Like any puppy, she wanted to explore her world and make new friends, but fear held her back.

During the two months that Shadow lived at the Sanctuary, Dogtown behavior consultants and caregivers spent countless hours working with her. While they did the same kind of puppy socialization training that all puppies at Best Friends get, they had to go slower with her. Since the puppy socialization period was over for Shadow, she was more fearful than curious about new people, places and things. She also needed more reassurance than puppies her age who’d been given the chance to learn about the world.

Although Shadow was a healthy and adorable puppy who made a lot of progress at the Sanctuary, she still had high anxiety. Adapting to a new home would be a real challenge for her, and she would need to find a person or family up to that challenge. Enter JD and Pam Bronson.

JD and Pam visited and volunteered at Best Friends for the first time in July of 2017. A few months after the couple returned home to Milwaukee, Wisconsin, they started thinking about adopting a dog from the Sanctuary. Pam found Shadow’s bio on the Best Friends website and couldn’t stop thinking about her, so the Bronsons contacted a Best Friends adoption specialist for more information.

“We were advised of the issues Shadow had with a lack of puppy socialization and anxiety,” JD says. Still, he adds, “Something about Shadow encouraged me to continue to ask questions.”

JD also knew that Shadow was likely do better in a home where there was another friendly dog to show her the ropes, and he and Pam have a very mellow eight-year-old dog named Sadie. So, while Pam was considering puppy adoption, JD hatched a plan: He would adopt Shadow as a surprise for his wife.

Shy dog is the perfect surprise

Once JD set the wheels in motion to adopt Shadow, Pam noticed that she was no longer listed on the Best Friends website. Despite her disappointment, JD didn’t let on that Shadow was on her way home to them. On the day of Shadow’s arrival, JD left work north of Milwaukee and drove two and a half hours to the airport in Chicago to pick her up. Since Shadow’s crate wouldn’t fit in the cab of his truck, JD’s coworkers had given him the perfect cover story: He needed to borrow Pam’s vehicle to pick up a large, fragile piece of equipment for work. “I felt bad about lying, but I wanted it to be a total surprise,” says JD.

Shadow was certainly surprised. “The plane arrived, and I waited for her to come out on the dolly, and there she was,” JD says. “She looked at me with hope, yet totally unsure of what was going to happen next.”

Pam, too, was in the dark. She had no idea that JD’s trip to the airport wasn’t just an errand for work or that the dog she really wanted was about to be hers. She got the perfect surprise when JD returned home and asked her for help unloading the “equipment.” Pam was shocked when she saw the crate marked “Live Animal,” and she asked her husband what was going on. 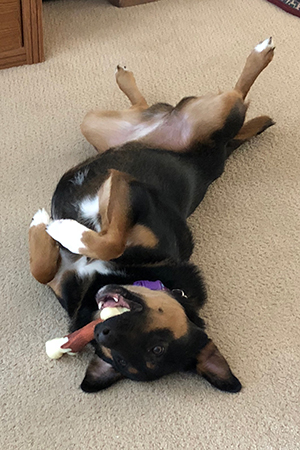 Pam’s shock quickly turned to excitement. “My wife was overjoyed I pulled this off,” JD says. But the couple had their work cut out for them. The months ahead would require an endless amount of patience and understanding as Shadow adjusted to home life and learned what it meant to be a beloved pet.

Because of all the help she received from Best Friends, Shadow was a lot better, but in an entirely new environment, she could still be shy and anxious. “She had a challenge initially with almost anything,” JD explains. “She was afraid of her own shadow. Housebreaking was very hard for her, as was accepting affection from humans.”

JD and Pam gave Shadow the time she needed to learn about her new world and to get to know them. They also knew how to housetrain a dog and they were patient when she had accidents.

Shadow has now been living with the Bronsons for more than six months. She’s adapted to her new home, learned the routine and is fully housetrained. She’s also become best friends with her older doggie sibling and follows her around. If Sadie does something, Shadow will too (which is how she got her new name). She’s started to really enjoy playing with toys. Best of all, she’s completely warmed up to JD and Pam, and she loves snuggling up on the couch with them.

Not all the effects of lack of socialization have disappeared. Shadow still suffers from anxiety and startles easily. She dislikes change, and new things — like unfamiliar stairwells, elevators and hotel rooms — still frighten her. Because Shadow didn’t get the positive reinforcement she needed until after her puppy socialization period had passed, she will likely always have a few hang-ups. But the Bronsons are doing what they can to make up for all of Shadow’s lost puppy socialization time, and they will be there to love and reassure her every step of the way.

“We will just work with her through her issues,” says JD. “She now has a great forever home with a great doggie partner and people who love her very much.”