Helping a stray cat get his zip back

Image
Stray gray tabby who was hit by a car and sustained serious injuries is helped by the Baltimore Community Cats Project in Maryland.
By Christina Green

Clearly, the Baltimore streets hadn’t been kind to Zee, a stray cat. As a community cat, he relied on the kindness of strangers to help him get along. But when a local Best Friends volunteer found him wounded, alone and probably quite afraid, it was obvious that he wasn’t able to go anywhere. He needed medical care, pronto.

Although Zee had enough charisma to be the mayor of Charm City, he also showed his scrappy side as he fought for his life. He had plenty of help along the way from the Baltimore Community Cats Project, a collaboration of Best Friends Animal Society and PetSmart Charities™ that prevents community (stray, feral and free-roaming) cats from being killed in shelters. Zee not only survived, he found a very special new best friend.

Abandoned cat hit by a car

When the community cat caregiver who volunteers with Best Friends found Zee, it looked like he had been hit by a car. Since he was on a street that’s a popular hangout for community cats, his rescuer rushed him to the Baltimore Community Cats Project headquarters, where he would be safe and well cared for by people who understood his needs.

Nationally, nearly three-fourths of the cats brought to shelters are killed. And Baltimore cats didn’t fare much better — that is, until the Baltimore Community Cats Project led the way to change.

The Baltimore Community Cats Project is one of four around the country administered by Best Friends in partnership with PetSmart Charities™. The goal of the project is to end the killing of cats in Baltimore animal shelters by empowering cat colony caregivers to better care for and manage community cats. The project includes trap/neuter/return (TNR) training and assistance for volunteers and local rescue groups, as well as treatment for sick or injured cats. Most cats are returned to their familiar outdoor homes after they are spayed or neutered.

Working with local partners and the Baltimore Animal Rescue and Care Shelter (BARCS), the Community Cats Project has led to 81 percent of cats entering local shelters being saved.

Medical treatment and antibiotics for a wounded cat

In the case of poor Zee, though, it looked like he might not even survive entering the shelter. “He had a badly broken leg, one large, horrible and infected wound and several smaller wounds,” says Rebecca Sass-Crews, Best Friends community cat project coordinator in Baltimore. “But even so, he was as sweet as can be from the moment we met him.”

Best Friends staff took Zee straight to the vet over at BARCS. The damaged leg would have to come off, but not until his infections were under control. So Zee stayed in Best Friends’ local hub, which serves as a holding area for community cats awaiting or returning from spay/neuter surgeries, and houses cats with medical needs. During the average week, between 30 and 100 cats enter the facility.

For two weeks, staff gave Zee daily pain medications and antibiotics, which he seemed quite happy to receive. He even sailed through the leg amputation surgery, but he still wasn’t out of the woods.

Nursing a cat in need back to health 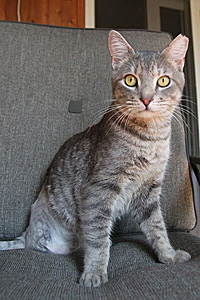 “Immediately after his surgery, he got very sick, very quickly, with a horrible upper respiratory infection and a high fever,” says Rebecca. “At that point, there was no guarantee he would even survive.”

Once again, BARCS stepped in to help. Zee was moved from the Best Friends office into a BARCS volunteer foster home with a vet tech, who nursed him back to health.

Even though most community cats are returned to their outdoor homes once they’re healed up and healthy again, Rebecca says that because of the leg amputation (and the fact that Zee was so friendly), there was a better option for him: adoption.

It wasn’t long before Zee hit the jackpot with the perfect home. Today, even though he no longer lives out in the community, he still deserves the label “community cat,” because so many in the community came together to help him get the best holiday gift ever — a loving home.

Keep the good news for animals coming. Here’s what you can do: