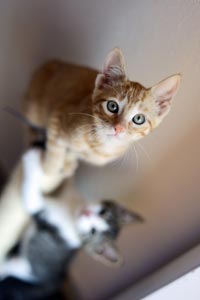 During a recent trap/neuter/return (TNR) event in Escalante, Utah, a construction worker found a litter of kittens under a house. The house was about to be demolished, and the mother cat, terrified by all the commotion, had fled. Best Friends’ Four Directions Community Cat Program, which works with more than 50 communities within a 150-mile radius of the Sanctuary, was able to help.

The program has significantly reduced the number of kittens born in the area in the past few years, but here was this litter of kittens and they needed help fast. While the tiny kittens were rescued and brought to the Sanctuary, volunteers returned to the area near the house and set traps in hopes of catching the mother. They acted quickly, knowing the mother cat might return, looking for her babies. Sure enough, she did. The family was immediately reunited and set up in a room where the feral mom could feel safe while nursing.

Once everyone was comfortable and happy, volunteers named the irresistible balls of fluff Chandler, Ross, Rachel, Monica and Phoebe, after characters from the popular sitcom “Friends.”

The “Friends” kittens are distinct from the many others that have come in through the program, because of the wonderful variety of colors and patterns in their fur. Chandler is all black. Ross is a brown tabby with big, white patches. Phoebe’s a tortoiseshell, and — despite the odds — Rachel and Monica are both orange tabbies. The vast majority of orange cats are male, making the pretty orange girls a bit of an anomaly. 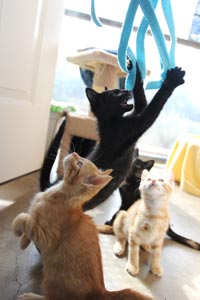 But just as Rachel and Monica don’t know that their color makes them somewhat rare, they also don’t have any recollection of how much danger they were in. Now their days are worry-free and filled with what kittens do best — playing ferociously.

While they wait for their forever homes, the five “Friends” spend their days chasing laser lights and getting the socialization they need to become wonderful pets. Cat World caregivers have been spending lots of time sitting in their room with them, getting them accustomed to being handled. Already it’s clear that they aren’t wary of people; when the tour guides walk visitors around their building, all five rush to the door to greet the newcomers.

The kittens’ mom was discovered to be truly feral and most comfortable living outdoors rather than in a home or at the Sanctuary. So, once Chandler, Ross, Rachel, Monica and Phoebe were eating on their own, the mom was spayed and released to live out her happy life of freedom. And she’ll never have to worry about caring for a litter of babies again.

Additional note: Great news, Rachel has already been adopted and the remainder of the Friends kittens all have adoption applications in progress.