Her world ended when her dog died, but then fate stepped in

Image
Grieving woman felt like her world would end when her dog died, but then fate stepped in and she met a distrustful senior dog who needed her help.
By Christelle L. Del Prete

When Donner came to Best Friends Animal Sanctuary in 2016, she wasn’t an easy dog to win over. She was apprehensive and wary around people, especially those she didn’t know. She really didn’t want to get in a car, something that would be a challenge for a future adopter. To top it off, she didn’t get along with other dogs and didn’t want them anywhere near her.

Meanwhile, Maryanne Dailey was grieving the loss of her dog, who looked a lot like Donner. She had just heard about Best Friends and was biding her time, waiting to plan her first trip to the Sanctuary. It turned out that when Maryanne was finally able to schedule her visit, Donner had made a lot of progress in how she felt about life. The shy dog needed a lot of help, and that’s what she got.

Over time and with hours of gentle, patient work from staff and volunteers, Donner became less timid as she became more confident meeting people, but she also improved in other areas of life. It turns out that she doesn’t mind being around cats, and she even made progress with accepting other dogs being near her. She began letting people she trusts brush her long silky fur, something she was not comfortable with in the past, and even getting into a car became easy.

In the following interview, Maryanne shares the story of how she and the shy black dog met and what life is like now that Donner is home. 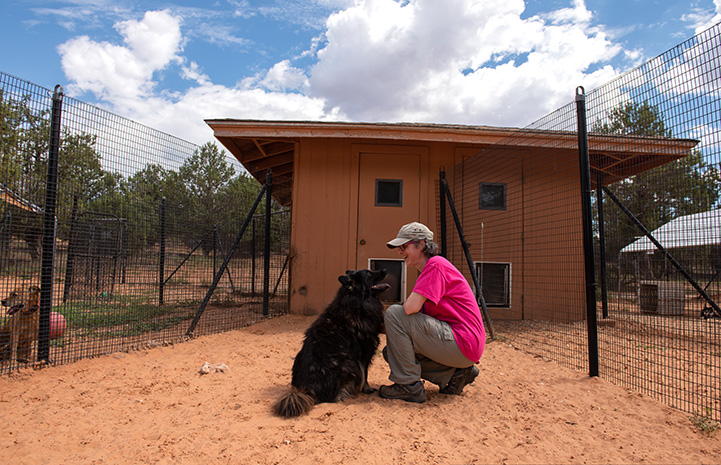 Losing an old friend and a teacher

In February 2017, my beautiful dog Maggie years passed away at the age of 14 1/2, and I thought my world would end. She was a black Lab-Chow mix and the sweetest girl in the world. I cried every day and wondered how I would get through the future without this beautiful creature in my life. Maggie had taught me so much — basically just how to be a better human being. I always believed that dogs were amazing teachers, but in watching Maggie I witnessed it firsthand — through her patience, her perseverance through every illness (especially through her last months), her genuine love for me and her playfulness.

I heard about Best Friends while watching television and sent a tribute to Maggie when she passed away. The more I read about Best Friends Animal Sanctuary, the more I realized how amazing and powerful it was. Although my grief was overwhelming, I kept thinking to myself that if I could just get to Best Friends, I would be able to say goodbye to Maggie in a way that would have a healing element, and maybe I could start to move forward. For two years, I kept checking availability at the Best Friends cabins until finally there was a cabin available on dates that I was available.

I arrived on a Monday and was not scheduled to start volunteering until Tuesday. So I had time for my volunteer orientation and I had lunch at the village café, where I met Best Friends co-founder Gabriel de Peyer. Then I had the day to see the Sanctuary, but even more important was seeing Angels Rest. I found Angels Rest with tears already in my eyes, and I hesitated before entering, but finally sat in the gazebo.

As I pulled out the book on The Rainbow Bridge, I told Maggie that I was going to read it to her as well as a message I had written. I found it miraculous that during the various times I was there, the wind chimes at Angels Rest would play their beautiful music. I told Maggie how much I loved her and missed her, but that I had to find a way to mend my aching heart. I asked her to help guide me toward another pet child to love, care for and embrace. I stayed awhile longer until the tears stopped. Then I thanked Maggie for being the most wonderful pet child ever and eagerly waited for the next day to arrive. 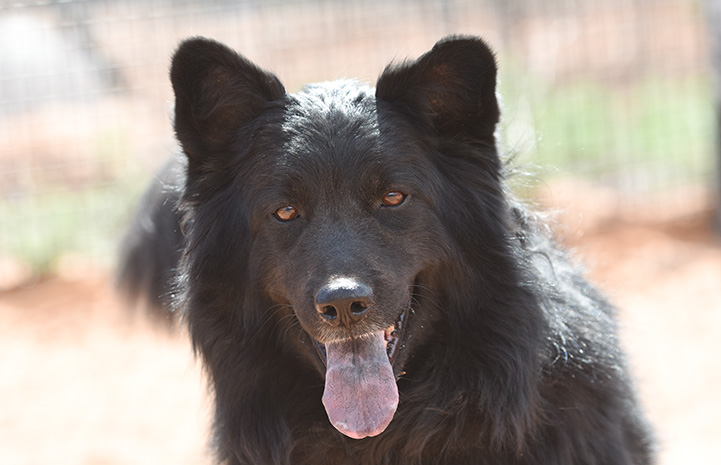 When it finally did and my volunteer shift started, I had the opportunity to meet a dog who loved treats, but did not warm up easily to anyone. Her name was Donner. I was intrigued and excited. I went into her yard with treats, sat down and saw this beautiful black dog. Her caregivers showed me what to do in working with her and I followed their example.

Donner came to me and ever so gently and slowly took the treat. That’s when I noticed her black tongue, which was just like Maggie’s. I began to speak to her in a gentle voice: "Come sweet girl, come Donner." And within a few minutes she was sitting right in front of me. Soon, I was stroking her beautiful fur while singing my favorite lullaby, "I See the Moon and the Moon Sees Me." I sang this for at least 15 minutes and, eventually, her paws were in my lap. I was thoroughly in love with her at this point.

I was then asked if I wanted to take her for a walk, even though she would probably not go very far. I said "Sure." Well, we went for the entire walk. At the end of the trail, I had to say goodbye and while doing so, she looked up at me and I looked down at her. I knew she was my next dog. I returned to the building where she lived and asked for an application to adopt her. I met with a Best Friends adoption specialist that afternoon and a Dogtown behavior consultant the following day and arranged for Donner to come home. 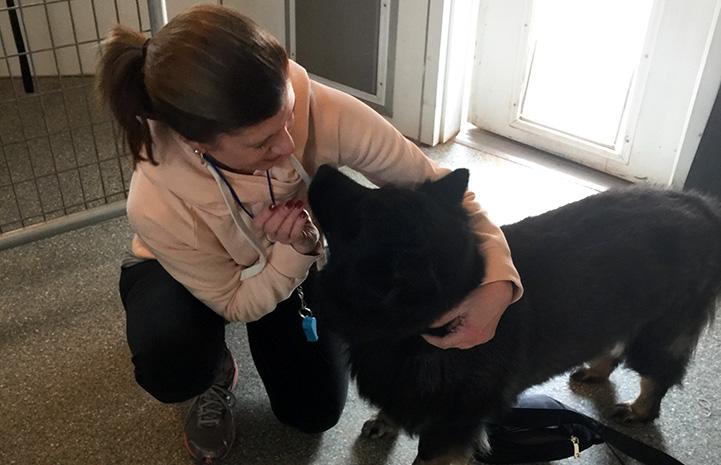 I will say that I had a new spring in my step from that point forward and a new happiness that I had not felt since losing my Maggie. 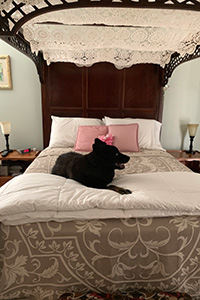 After deciding that Donner would be coming to live with me, I started preparing my house, finding beds and feeding dishes for her. I even prepared welcome signs for her. My focus was her and giving her the best home possible. She could not arrive too soon. When the day came, I was ecstatic. Finally, she would be here.

When I opened the crate and helped her out, she roamed around my home. She found her water bowls and her dog bed as well as places where she felt most comfortable. From that first day, she has been an affectionate and loving dog. In the morning, she waits until I get up, at which time we go for a walk. She has learned not to bother the many bunnies along the walking trail, and doesn’t bark at the other dogs anymore. We are a team, and she seems to really like that.

When we return home from our walks, she rests for a few minutes. Then I make her breakfast and we go out to my screened in porch for some "home-schooling." She has learned "paw" and has also learned to find treats under the tennis balls that I place in cupcake tins (a homemade food puzzle).

I always know when she is ready for a long petting session when lies in her dog bed, or at night when gets in her bed. She still likes me to sing the same lullaby that I sang to her that first day that I met her.

A new name and a loving bond 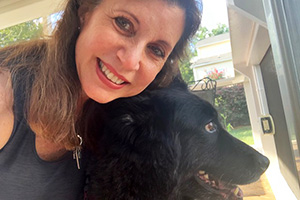 Donner is now Rosie Donner Dailey, and she continues to be a loving pet child. From day one, she was responsive to hugs and nuzzling. She enjoys playing with her squeaky toys and will often toss the toy in the air and kick her back feet out like a horse. She is learning to play tug-of-war with some of the toys and is also learning to play with the Frisbee, although she has yet to master returning the Frisbee.

Although she is now accepting of others who enter our home, her attachment to me is evident. She never seems to be too far from me, whether I am in my office on my computer, in the kitchen cooking or anywhere else. She is truly my little shadow, and I love her so much.

Photos courtesy of Maryanne Dailey and by Molly Wald