Some dogs have such amazingly high energy it can be exhausting just to watch them. At Best Friends, homes for those ultra high energy dogs (or any dog for that matter) require the right fit. A good thing, then, that the adoption coordinators are such matchmaking experts!

Kilo was one such high-energy dog who lived at the Sanctuary not long ago. Kilo was found as a stray playing with kids during recess at school. The shelter where he ended up didn’t feel they could deal with his high energy antics. As luck would have it, space had become available at Best Friends so Kilo was able to live at the Sanctuary while trying to find his own home.

At Best Friends, Kilo was the classic example of a dog who wanted to keep moving as long and as often as possible.

He turned out to be the perfect fit for Misty Brown and family from Salt Lake City, Utah. Not only do the Browns have young, high-energy kids of their own in the home, Misty is a runner who wanted a dog for company on her runs. The family fell in love instantly when they met Kilo four months ago. They decided to adopt him right away.

Kilo gets along famously with the whole family and has turned out to be the ideal running companion. Even though Misty was already a runner before they adopted Kilo, she’s lost 20 pounds in the four months she’s gone running with him. He pushes her to go longer and faster to where they now run seven to ten miles each day. Afterward, Kilo comes home and sprints around the yard to burn off all the extra energy. (Too bad he can’t bottle up the stuff and sell it.)

When these high-energy dogs have enough exercise, they are happier and healthier. And, as in the case of Kilo, they can then pick up interesting hobbies on their spare time. For Kilo, that day came when a wild hen laid and then abandoned some eggs high in a tree on the Brown’s property. 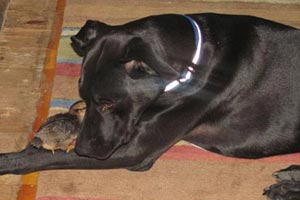 One of the eggs hatched and the Browns brought the chick inside and placed her in a box when she was only a day old. The mother wasn’t coming back and the chick needed help. Where the help ended up coming from, however, nobody could have guessed. After several nights without incident, the family woke one morning to find the box tipped over with the lid off. There was the baby chick — now known as Little Peepers — snuggling with Kilo.

The family watched the pair closely that day and then decided to let the two hang out some more. Turns out Kilo is a terrific mother hen. One of his favorite activities now is to nudge open the sliding glass door and let Little Peepers (who is quickly growing up and earning outside privileges) inside for a shared meal of dog food and play time in the water dish. You see, now that Kilo has his high-energy needs met he has room to explore other interests. "She’s his chicken," says Misty. The two have become inseparable. The family intends to keep Little Peepers from here on out.

As it turns out, another high-energy dog back at the Sanctuary is also working toward finding her own perfect fit. Lacey has always been an athletic dog who couldn’t sit still on a bet. All that restless energy might explain why Best Friends is already her third rescue (at only two years old).

A recent visit from a flying disc training expert, however, turned out to be the best thing Lacey could have hoped for. 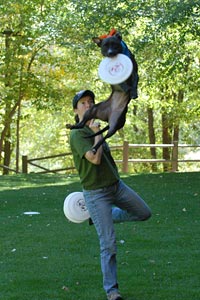 Nadja Palenzuela and her rescued shelter dog Thelma, from the Purina Incredible Dog Team, visited Best Friends to do a demonstration on flying disc work. While in town, Nadja also offered to evaluate several Sanctuary dogs for flying disc work.

For those of you who have never seen a disc-dog in action, it’s about as high-energy an activity as you can imagine, short of trying to swim upstream. Those dogs don’t just run after the disc, they leap, bounce, and even rebound off their trainer’s body while doing twists in the air to grab the thing. It’s a constant calorie-burning extravaganza where dog and trainer have an absolute blast the whole way.

was one of several dogs around the Sanctuary whom Nadja evaluated. Nobody had ever tried flying disc work with Lacey before and so it was anybody’s guess how things would pan out.

Lacey turned out to be a born disc-dog! 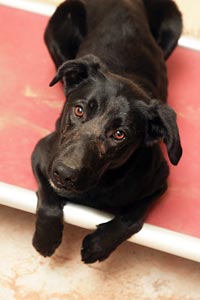 Within an hour she had mastered the concept and was having the time of her life. In fact, she was so successful that when Nadja placed a video of Lacey from the evaluation on her web page, a potential adopter contacted Best Friends to fill out an application. Lacey’s trainers have continued working with her on this newfound flying disc obsession. "She has really great focus," says Lupe Sandoval, the caregiver who brought her to the evaluation.

Some dogs, like Kilo and Lacey, love to experience life in the fast lane. Others prefer to sit and watch butterflies all afternoon. But, as anybody who works in adoptions will tell you, there’s someone for everyone.

Get in on the fun: For more information on training tips and tricks, especially fun things you can do with your dog, go to the Pet Resource Library.