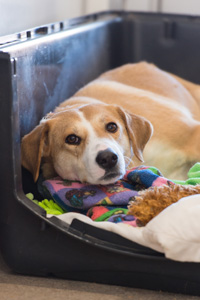 For abused animals like Tigerlily and Kay, the whole world can seem like a dangerous, inhospitable place. The two-year-old dogs began their lives in a horrible hoarding situation in Tennessee. They spent their days wandering around a cluttered property and their nights huddled under a trailer. The only humans they ever saw mistreated them, so they learned to fear people and to keep their distance from them.

Luckily, Tigerlily and Kay (along with 16 other dogs on the property) were saved by a national emergency response group. For the first time in their lives, they were sheltered and safe. But the two dogs were so unsocialized, it would take a lot of time and care to help them overcome their terror before they’d be ready for homes. So the girls came to Best Friends for some intensive rehabilitation, plenty of time to get to know people who would never harm them, and all the help they would need to rebuild their shattered trust.

At first, both dogs completely froze when they were around people. They didn’t know how to walk on a leash, and they certainly did not want to be touched. So Tigerlily and Kay had to be carried into the Dogtown admissions building in large dog crates. Once inside the bright, busy building, the girls were given their own quiet rooms. But they were understandably overwhelmed.

They both just wanted to hide. Kay wouldn’t crawl out of her open crate, and Tigerlily ran out into the rear, open-air portion of her room and refused to come inside. But it was early December and cold in Angel Canyon. Though caregivers gave her a warm, comfy bed outdoors, Tigerlily soon caught on that the heated part of her room was better than being outside all the time. She also learned that inside was the place to be if she wanted delicious treats. 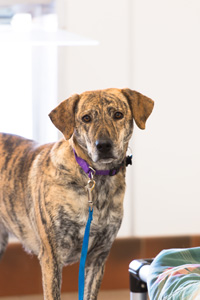 Though neither Tigerlily nor Kay wanted anything to do with people in those first few days, Dogtown caregivers — along with local volunteer Bill Splitter — were patient and persistent. It takes time for dogs from animal hoarding situations to come around. So, while the dogs’ caregivers immediately got to work trying to gain their trust, they let Tigerlily and Kay set the pace. Bill began by sitting quietly with Tigerlily and Kay and hand-feeding them the best treats he could find. Bit by bit, the dogs began to trust.

Both dogs still have a long road to recovery ahead of them. But already, in the days and weeks they have been at the Sanctuary, there are signs of hope and recovery. The dogs are starting to give tiny glimpses of the personalities they’ve kept locked inside all their lives. And their behavior shows a willingness to keep learning and gaining trust.

Tigerlily likes to peer out of her room through her clear glass door. When she catches sight of Bill, her tail starts to wag really fast. When Bill opens the door and steps into the room, Tigerlily will approach him, then settle down and nibble treats from his hands.

Meanwhile, Kay has abandoned her crate in favor of her comfortable Kuranda bed. She peers cautiously out her door and does not get up when Bill walks into the room. But her tail starts to wag. And she lowers her head and lets Bill — one of her very first human friends — gently pet the sides of her face.