When Cat World volunteer Craig Bickler said he would like to adopt a cat, no one dreamed it would be Homer. The Sanctuary had been Homer’s home for many years. If he was going to leave with someone, it would have to be a very understanding adopter with a very special kind of home. Craig turned out to be that adopter. He and his wife Edwina had exactly the home Homer has waited for nearly all his life. 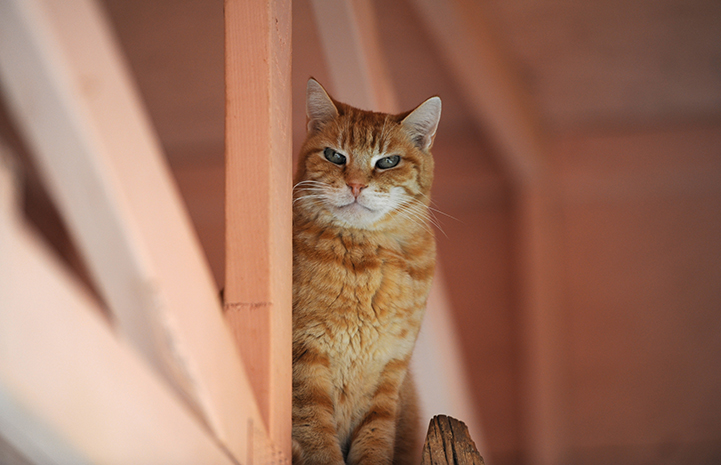 Homer the cat’s odyssey began in 1999 when he was found in a dumpster with his sister. Back then, they were just kittens — adorable four-month-old fluff balls. Though neither of them was very social with people when they arrived at the Sanctuary, Homer’s sister came around and was adopted. But in spite of having his social sister and other people-friendly cats as role models, Homer wasn’t inclined to interact with people. A shy guy, he took to the rafters and made himself scarce most of the time.

Homer just preferred that people stay away, and the look on his face seemed to plainly say that. But his caregivers weren’t fooled by his looks, and with patience and persistence, they were eventually able to befriend him.

Mike Bzdewka, a caregiver at Cat World, was the first person to pet Homer. He remembers that moment well. “Homer was sleeping on top of the cat cubbies and I slowly approached him and laid my hand on him. He was a little startled at first, then seemed to enjoy the touch.”

Once Homer learned to accept being petted, he clearly began to enjoy it more and more. But it always had to be on his terms. “He did like to be petted, even by strangers, but he made the choice on whether he wanted anything more to do with you,” says Katie Kyzivat, a team lead at Cat World.

Grumpy-looking cat with a troublesome habit

Although he wasn’t a cat likely to put his best foot forward with people, many Sanctuary visitors over the years found Homer endearing. They found his grumpy look adorable, and they wanted to get to know the mysterious orange cat. A number of people genuinely wanted to bring him home, but there was a big bump on the road to his happily-ever-after.

Homer had a habit powerful enough to turn away most potential adopters. He had a tendency to urinate inappropriately indoors. While some cats do this when they are uncomfortable or anxious around other cats, Homer thrives with feline company and living in a room with more social cats was helping him improve his own relationships with people.

Homer’s habit might have been easier to overlook if it was just the occasional accident. But despite his caregivers’ best efforts to help, Homer was notorious for the behavior. “We couldn't pinpoint whether that would stop in a home or not,” Katie explains, “and that deterred pretty much anybody interested in him.” 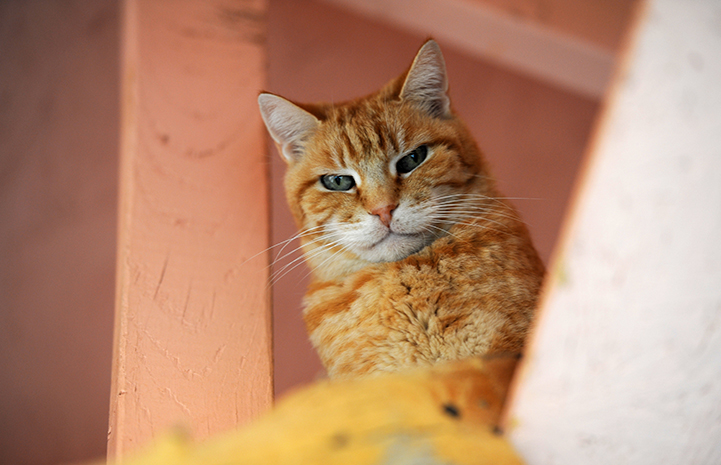 Then Craig came along. He and Edwina are cat lovers with a soft spot for orange “tomcat” types. They’re also very savvy with shy cats. At home, they’ve created a sanctuary for about a dozen cats. Their large property near San Diego, California, includes more than two acres of securely fenced grounds for their cats to roam when they aren’t inside the house.

“We don’t usually do indoor-outdoor cat adoptions,” says Sherri Wilhoite, adoption specialist for Best Friends. But this is a special case. While Homer will have outdoor access, the cat fencing (which has predator proofing on the top and a four-foot extension under the ground) will help to keep him safe and secure while he roams the two and a half acres. There he can lie under (or climb) shady trees, explore the two-story barn or watch fish swimming by in the pond.

Once again, Homer will have plenty of feline friends, including three seniors older than him. And, because the couple works from home, Homer will have human attention whenever he wants it. He’ll even dine on homemade food that Edwina makes for all the cats.

And what about Homer’s little habit? That’s no problem, because Craig and Edwina have equipped their house with walls that are easy to wipe down.

After a month of being home, Homer hasn’t magically transformed into a lap cat, but he’s slowly learning how to be a house cat. Craig says Homer was at first apprehensive about the big change. But, he adds, “Homer is doing fine now. Over the past few days, he has been coming out of (his hidey hole) more. It has been a pleasure watching Homer starting to expand his horizons and we look forward to the pleasure of his company for hopefully many years to come.”

After nearly a lifetime of waiting for just the right family that doesn’t mind his quirks, Homer is finally with them. He made the journey to California right before Christmas, which is why Mike calls it “a Christmas miracle”. “He was a very special boy and extremely dear to me. All cats deserve a home, and he finally got his,” says Mike.

While it’s true that Homer’s odyssey has spanned nearly two decades, it is ultimately a story of hope for homeless pets. That’s because, at long last, two people opened their hearts and gave a quirky, but also deserving cat a shot.

“It just goes to show that there is a right cat for every situation,” says Sherri, “and exactly the right kind of home.”