Horse’s lameness has a silver lining 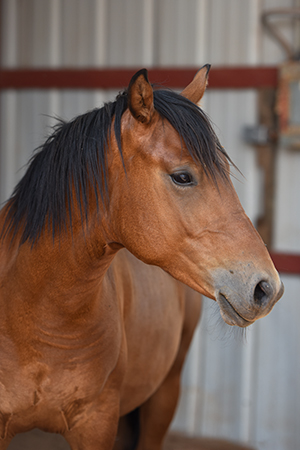 It would be an understatement to say that Willie was experiencing some equine lameness this past June when he came to Best Friends Animal Sanctuary. On the day that the yearling quarter horse arrived at the Sanctuary, Horse Haven caregivers didn't know if he'd be able to hobble out of the horse trailer and into the paddock they had waiting for him.

But the young horse was a trooper, and although he couldn’t put any weight on his back left leg, he limped out of the trailer. When his feet finally came to rest on the Sanctuary ground, it was Willie’s first stop on the way to a much better life. But at that time, no one could imagine just how quickly or how well things would work out for him.

Six weeks after Willie climbed painfully out of that trailer, he was fully recovered and stepping sure-footedly out of another trailer at his new forever home.

Common causes of lameness in horses

Willie was abandoned on a rental property in southern Utah with his piggy friend, Petunia. The property owner couldn’t care for the animals because they both had mobility challenges, so they came to the Sanctuary. 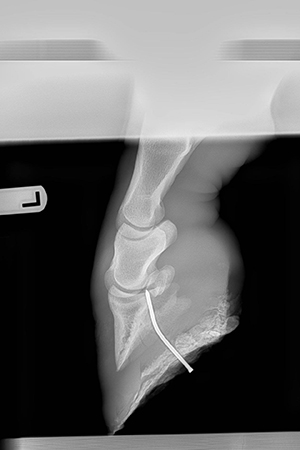 From the moment Willie arrived, finding out what caused him to limp so badly was the top priority. The Best Friends veterinary team, along with Jen Reid, manager of Horse Haven and an experienced farrier, went right to work. At the on-site clinic, they examined Willie thoroughly for common causes of lameness, such as wounds or infections in his hoof, fractures, sprains or strain to his leg, tendon injuries and laminitis (an inflammation of the connective tissue in the hoof).

What ailed him was a three-inch nail that had pierced the bottom of his hoof and became lodged. “I saw the head of the nail when I examined the hoof,” Jen says. “X-rays confirmed how deep it went and which structures were affected. It didn't touch the bone, but went to the side of it.”

No wonder poor Willie couldn’t put any pressure on his foot.

Dislodging a nail from a sore hoof

Willie would need surgery from a specialist to remove the nail, so he was soon on his way to an equine medical and surgical center in Las Vegas. The surgery went well, and Willie returned to the Sanctuary to rest and recover.

After the surgery, however, Willie’s stay at Horse Haven would be significantly shortened — and not just because his recovery went so smoothly. As it turned out, the trip to the specialist not only helped Willie regain the use of his foot, but it also helped him get adopted.

Vet tech Nichole Ecret helped care for Willie during and after his procedure, and she fell hard for him. “I fell in love with him,” Nichole says. “I sent a video to my husband, Sean, and he fell in love, too. He and my children came to visit and say hello to Willie at the surgical center. When they all laid eyes on Willie, they felt what I did, too. As did he. He came over and wanted to be loved.”

What happened next threw Nichole a curve ball. “My husband’s version of horse power is a motorcycle, and he always says no to more animals. But at that moment, he said he wanted Willie.”

Nichole didn’t hesitate. Since Willie was new to the Sanctuary and he’d have to heal before he could go to a new home, he wasn’t yet listed with the other adoptable animals on the Best Friends website. So Nichole emailed Best Friends to say she was interested in adopting him.

Lameness has a silver lining

The wheels were in motion, and Willie would soon be on his way to his new home in Las Vegas. But Nichole and her husband didn’t immediately tell their children — Aiden, 10, Lucas, 8, Autumn, 5, and Tyson, 4 — that Willie would soon be theirs. “We kept him a secret for a long time, and on the children’s first day of school we surprised them with their new best friend.”

It has turned out to be a match made in heaven. Willie loves his new life with the Ecrets. He adores the family’s eight-year-old horse, Static, and follows him around as if the older gelding was his mom. He’s also a sweet and gentle companion to the children. He can be led around easily by his fly mask, and he loves to play games of tag with the kids. 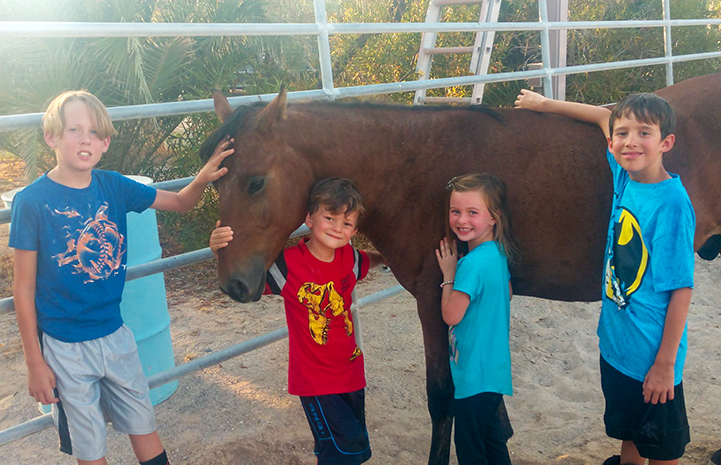 “Our life hasn't been the same since bringing him home,” Nichole says. “He continues to grow every day, and we can't wait to see where he takes us in the future. We absolutely love him and are so grateful and thankful for him.”

Willie’s whole life has changed since the day he limped into Horse Haven. You could say that his temporary lameness had a silver lining — or that the medical emergency that brought him to Las Vegas helped him win the lottery and land the perfect family.