How an angry senior cat went from shelter to home

Image
Angry senior cat, who would spit, hiss and growl at people, is helped with reward-based clicker training and then goes on to be adopted.
By Nicole Hamilton

There’s a phoenix in the Harry Potter series named Fawkes whose tears contain healing properties that end up saving Harry’s life. It’s after this character that Jessica Greenhoe decided to name the cat she adopted from the Best Friends Lifesaving Center in Los Angeles. After all, his name already was Phoenix, and Jessica is a big Harry Potter fan.

Fawkes the cat shares more than just a name with the fictional character, though, because like a phoenix, he rose from great adversity, and like the Harry Potter character, he helped Jessica emerge from a difficult time to once again find joy in life.

When shelter life is too difficult for a cat

Fawkes was around nine years old when he ended up at Los Angeles Animal Services, and he made it clear to everyone that he was not happy to be there. Some cats adjust easier than others to their new surroundings, but Fawkes was adamant: He’s not one of those cats, and to get this point across, he’d crouch, growl, spit and swipe at anyone who came near him.

Because of his behavior, the shelter staff decided to place the upset kitty in a working cat program where he could live peacefully in a barn, warehouse or other enclosed area and keep a comfortable distance from his human caregivers. As part of our No-kill Los Angeles (NKLA) initiative, Best Friends in Los Angeles helps the city shelter with our working cat adoption program. That’s how Fawkes came to the Best Friends Lifesaving Center and got help for the next chapter of his life. 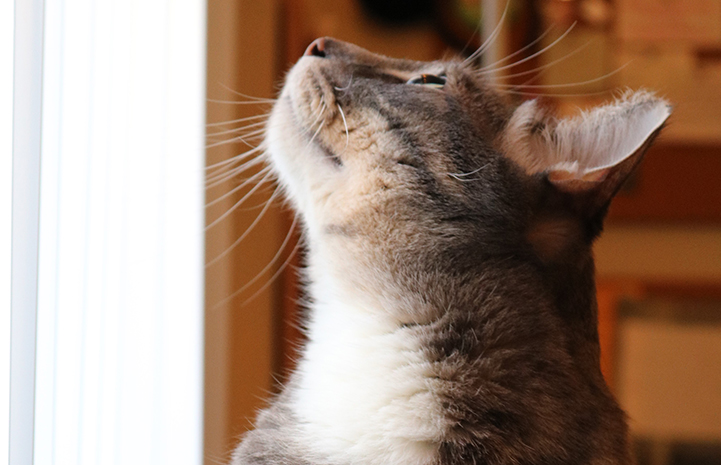 With the move to Best Friends, Fawkes’ future was already looking brighter. But when he met Samantha Bell, the center’s cat behavior and enrichment lead, things changed for him in the best way possible.

Samantha visits all the cats in the working cat area when they first arrive to see if any want to be friends with her. If they do, there’s a good chance that with a little help, they can begin to relax and trust people again so they be adopted.

“Most (cats in the working cat area) hide or stomp and spit when I look at them, but he was different,” says Samantha of the first time she met Fawkes. “He was trying to get my attention by crying and reaching toward me.”

Samantha noticed that Fawkes loved treats, so she started doing reward-based training with him using a clicker, a small device with a metal strip that makes an attention-getting sound. “I clicked and gave him a treat when he'd stop growling and also when he'd interact with me gently,” says Samantha.

Fawkes proved to be a fast learner. “He quickly gained the confidence he needed to interact nicely with others,” says Samantha (who even taught him to do a high-five). “And he finally felt in control of his environment. That’s when we felt he was ready for a traditional home.”

After his time in the working cat area, it was on to Samantha’s office for Fawkes. There, he quickly made friends with everyone. Soon he was calling dibs on Samantha’s desk and keyboard. A pile of paperwork was fair game for a nap, and he loved rolling around on his back.

No one could have known it then, but Fawkes’s adopter was closer than anyone could have imagined. Jessica Greenhoe loves volunteering in the center’s kitten nursery, but when she started, she was going through a hard time. “My anxiety and depression were the worst they had ever been,” she says. “Volunteering helped for a while, but I was still missing something.”

The longer Jessica cared for tiny, neonatal kittens, the clearer it became that what was missing from her life was a cat she could share it with. She told the adoption team that she was looking for younger cat, but they had a different kind of cat in mind for her: a nine-year old named Fawkes. 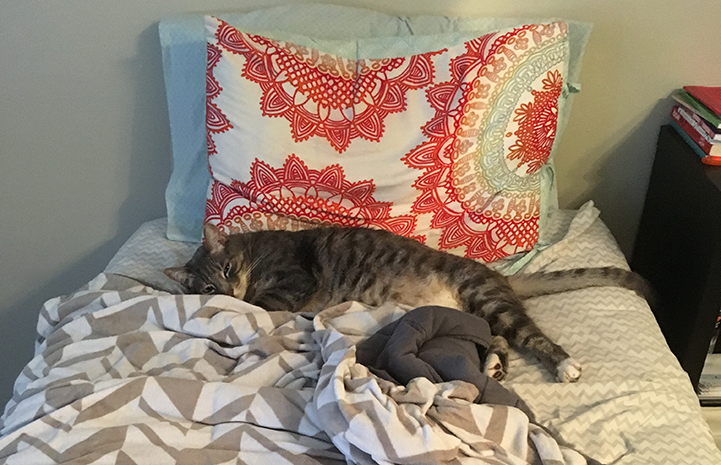 A kiss from a cat

Jessica kept an open mind as she walked back to Samantha’s office to meet Fawkes. Then, as soon as she sat down in a chair, Fawkes jumped into her lap and gave her a kiss on her nose, something Samantha had never seen him do before.

“He came home with me not an hour later,” says Jessica, who began feeling better as soon as he graced her with that kiss. But it was also special day for Fawkes, who had just made a phoenix-like rise — from scared shelter cat to adopted nose kisser. 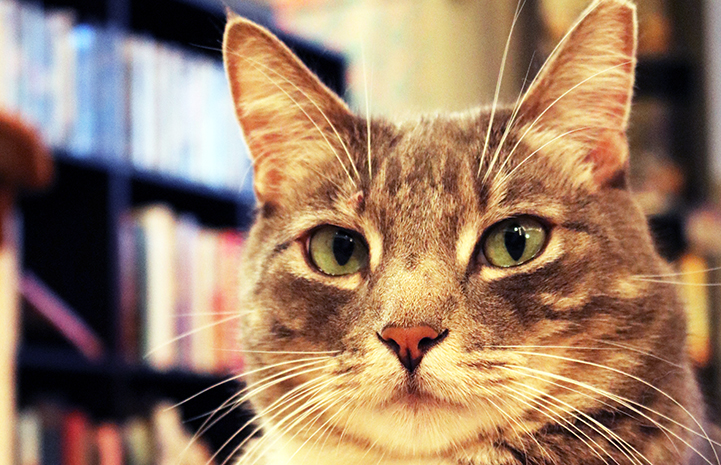 A cat’s lesson about finding joy in the little things

Fawkes is now helping Jessica enjoy life to the fullest again — just by being himself. “I used to just want to stay in bed all day, but he won't let me forget when he hasn’t been fed in more than two hours,” says Jessica.

Like he did in Samantha’s office, Fawkes enjoys lying on top of Jessica’s desk and laptop and reminding her that it’s important to take breaks — something she tends to forget.

Fawkes loves sitting for hours with his favorite toy, a stuffed banana, and looking out the window. “It makes me happy to see him happy, and I remind myself that I need to be more like him and enjoy the little things in life,” says Jessica, who shares updates about Fawkes on his Instagram page.

Fawkes likes to chat with Jessica. But perhaps even more important is that he can get Jessica to laugh. “I enjoy being awake now, because I have him to love on and laugh at,” she says.

Sometimes Jessica looks at Fawkes and remembers that there was a time when she was hesitant about adopting an older cat. But then she sees how happy Fawkes is and how he was able to rise above great difficulty to find joy in every little thing.

That’s when she’s so glad she decided to pay a visit to Samantha’s office to meet him. And Samantha is glad she did, too. “Most people who met him thought he was ‘too old’ or ‘too big,’ but he didn't pay them much attention,” says Samantha. “He must have known Jessica was ‘his person’ by the way he immediately melted into her arms, purring. I am so happy for both of them.”

Photos by Lori Fusaro and courtesy of Jessica Greenhoe