How to care for orphaned kittens

How do you care for abandoned or orphaned kittens? First, determine if the litter of kittens is truly orphaned or if the mother cat just away for now.
By Denise LeBeau

Each year, tens of thousands of kittens are born outdoors to free-roaming cats. If the mother cat either doesn’t or can’t care for them, the kittens’ days are numbered unless someone steps in to take over the care and feeding — quickly. Many of these very young kittens (under eight weeks of age) are brought to animal shelters simply because people don’t know what else to do with them. Unfortunately, kittens younger than eight weeks old account for more of the animals killed in most municipal shelters than any other group of animals. That’s why Best Friends is working with communities around the country to target underage kittens by putting together teams of volunteers willing to bottle-feed and care for them until they’re old enough to be spayed or neutered and adopted into a new family.

While kitten season takes place in the spring and summer in much of the United States, it can be year-round in warm climates. In this four-part series, experts at Best Friends Animal Society will share information on what to do if you find a litter of kittens. The first step may surprise you.

“So many times, people assume kittens are abandoned when they actually aren't, and put them in more danger by taking them away from their mothers,” says Trielle Gritton, senior manager of adoptions and outreach at Best Friends Animal Society–Utah. Trielle explains that the first thing you should do if you find kittens without their momma is determine whether she’s still in the picture. If the kittens are sleeping peacefully, chances are the mom is coming back. Once you’ve discovered the kittens, it’s important to check back every two to three hours. If some kittens are missing, the momma is probably moving them as their lair is no longer secret.

Monitoring kittens’ behavior is the best way to determine if they are really abandoned. Janice Dankert, Best Friends community cat program supervisor, advises, “Observe the kittens from a distance for at least 12 to 18 hours before determining that they’ve been abandoned. If you have been monitoring the area, and you are still unsure whether the kittens are abandoned or not, Trielle has a great tip: Sprinkle a bit of flour around where the kittens are nestled and look for paw prints when you return. 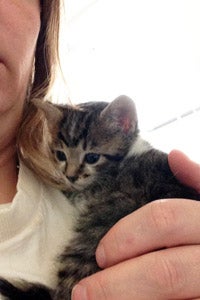 Mother cat is just away at the moment

If you check every two to three hours and the kittens are content and not fussing, they are most likely not abandoned. In this instance, the best option, whenever possible, is to leave the kittens alone with their mom. Then in six to eight weeks, when the kittens are old enough to eat on their own, the whole family can be trapped, spayed and neutered and returned to live the rest of their lives where they are, but without being able to have more kittens, which can lead to the number of cats quickly spiraling out of control. Learn more about trap/neuter/return.

If the kittens are not abandoned but are in danger where they are, you can move them to a safer location in the immediate area, so the momma can still find them when she returns.

“If the kittens are dirty, meowing, don’t have any teeth, and the mother has not come back in many hours, you can consider them abandoned,” says Nicole Swartzlander, neonate coordinator at Best Friends Animal Society–Los Angeles.

If the kittens appear sick, extremely underweight or dehydrated, or if the mom does not return, then a local rescue group or animal shelter may be able to help. Search online for cat or kitten rescues or shelters to find an organization near you.

If you determine that the kittens are indeed abandoned and you’re willing to take them in to care for them — even temporarily — your next steps are imperative to their health and well-being.

More about caring for kittens

Note: This article is the first in a four-part series on caring for baby kittens who are abandoned. Read more about orphaned kittens and how to figure out their age in part 2.