How cat clicker training helps at the vet’s office

Image
Mouth inflammation made one cat who has stomatitis nervous about being touched, but clicker training has helped make trips to the vet easier.
By Christelle L. Del Prete 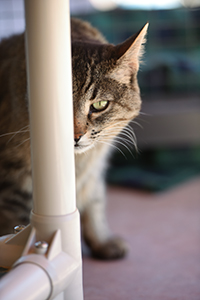 Imagine having serious mouth pain, but being so afraid of the dentist that you can’t get help. It’s not only people who sometimes experience this problem. Pets can go through the same thing.

In this case Grey, a 10-year-old tabby cat, didn’t like to be touched — especially around his mouth and face. It’s understandable that he’d be leery because he has feline stomatitis, an inflammation of his mouth and gums, which causes painful mouth ulcers. But that made the vet visits he needed pretty rough.

To make matters trickier, Grey was never well-socialized in his younger years. He had even spent some time as a stray, fending mostly for himself. Then when the person who sometimes looked after him passed away, he didn’t have many options. Local rescue groups were full, and it’s not easy to find a home for a cat who doesn’t like being petted by people. So Grey was brought to Best Friends.

In Cat World, Grey could be himself and still get great care and attention. His caregivers offered him their friendship but didn’t force affection on him. They would pet him when he allowed it — usually while he was eating or while they were also petting his roommate. And they gave him space when he wanted it, which was most of the time. It was a perfectly acceptable living arrangement — except for one glitch.

If Grey’s cat stomatitis were left untreated, the pain could get so bad that Grey wouldn’t be able to eat even the softest foods. He needs regular vet visits and injections to keep him healthy and feeling fine. That meant he had to be able to tolerate people touching him and looking in his mouth on a regular basis. While he can be sedated for thorough checkups, it’s not an ideal long-term solution. Luckily, a much better option came along from an unexpected place.

Learn more about stomatitis in cats

Can you train a cat to enjoy medical handling? Probably not, but can you train a cat to cope and feel less stressed about it? You bet. That’s what Allie Bender, Dogtown’s lead behavioral consultant, set out to do with Grey. Though Allie primarily works with dogs, she’s been working to help Cat World staff expand their cat training and enrichment program, just for cats who need it most, like Grey.

Because Grey is a really smart cat and his caregivers were hopeful that training could help his medical checkups go more smoothly, he was perfect candidate for cat clicker training. Allie knew they’d have to start small, but she set some pretty lofty goals for him. She didn’t just want Grey to tolerate his vet visits. She wanted him to actively cooperate with them, because that was the key to getting him the best possible care.

First, they started with the most basic handling skills. As he was with all people, Grey wasn’t particularly excited about meeting Allie for the first time. But within her first few visits, she taught him the “click for eye contact” trick. Grey learned that if he looked her in the eye, she would click the clicker and he would get a tasty treat. When he was no longer afraid to look directly at Allie, they began working together on physical contact. 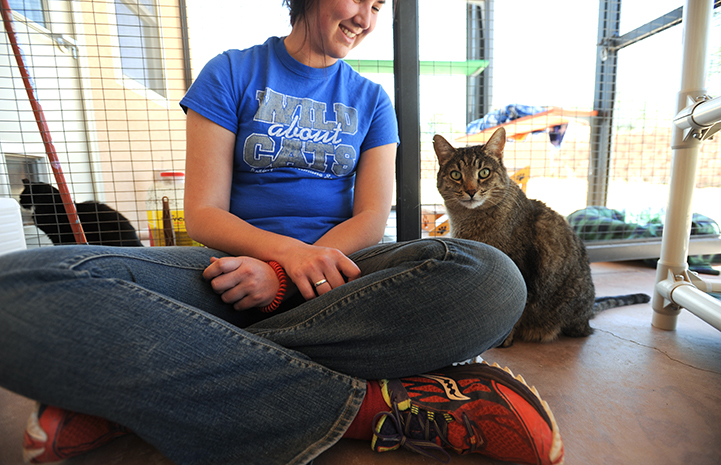 Nine months into his training, Grey still doesn't like being touched around the mouth, and he wouldn’t choose a vet visit over a play session. But he’s made amazing strides in accepting human friendship and contact. When Allie comes to Cat World for his weekly training sessions, Grey walks right up and sits down next to her. Sometimes, he’ll even put his paws on her, interested in getting some attention from her. And, instead of hanging out in the back of his room, Grey often sits by the door, where he can look out the window and watch his caregivers come and go.

“The training has been a huge relationship and confidence builder for this super smart cat,” says Allie. “He’s much happier and more outgoing than he ever was before.” Grey no longer fades into the background when people are around. The change has been so drastic that volunteers and Cat World caregivers who don’t work with Grey every day have asked, “Who’s that cat?”

Of course, Grey’s increased comfort around people makes his vet visits go more smoothly. Recently, he hit a huge milestone. He was able to get a routine medical exam without any sedation. The exam included a blood draw and peek into his mouth. “This is huge for Grey,” says Cat World manager Michelle Warfle.

But Grey and Allie aren’t stopping there. He’s now learning to open his mouth on cue. In the beginning, Allie would dip the tip of her finger into a jar of baby food and simply let Grey lick the treat. She watched Grey lick his lips afterwards and waited until he opened his mouth really wide. The instant he did that, Allie would click and give him a treat. Next, he learned to look at his trainer when he opened his mouth to get his reward.

All the relief he needs

Lately, Grey has been responding to the word “open” by opening his mouth really wide while looking up at Allie. As one might expect, it’s a trick that’s taking some time to perfect. But, because his mouth is the whole reason he needs to visit the clinic regularly, being able to open it on cue is also a really useful skill.

Once Grey masters the “open wide” trick, all of those regular dental checkups he needs to stay pain-free will go a lot more quickly and easily, and his trips to the vet should be a breeze. Best of all, when his doctors ask him to open up and say “Ahhh,” Grey will feel confident enough to get all the relief he needs.

Help bring hope and healing to more animals like Grey