How a deaf, geriatric cat with thyroid disease found a home

Image
Geriatric, deaf cat, who has scarred ears from scratching when they were infected, thyroid disease, and needed dental work, gets help and is adopted.
By Nicole Hamilton

There was a time when things weren’t looking too good for a senior cat named Teddy.  Despite being a loveable guy who someone once called a “purr machine,” he was surrendered twice to Animal Care Centers of NYC (ACC).

Teddy is also deaf, has scarred “cauliflower” ears from scratching them when they were infected, has thyroid disease, and needed extensive dental work. If you said Teddy the cat was an underdog at the ACC shelter, you’d be right. As a senior cat with a multitude of treatable but pressing health issues, Teddy’s chances of getting adopted from the shelter in the shape he was in was slim.

Too often, there isn’t enough space or resources at large municipal shelters for cats like Teddy, who are likely to be passed up by adopters in favor of younger, healthier cats. But even though Teddy requires more trips to the veterinarian than most cats, he still deserved a loving home. To help make that happen, K9Kastle, a Best Friends Network partner took in Teddy.

“K9Kastle finds the neediest and sometimes least-likely-to-be-rescued cats, takes them out of the shelter, rehabilitates them and finds them wonderful homes,” says Jo Ann Douglas, K9Kastle president.

At K9Kastle, Teddy got the dental work he needed to feel better. Then he settled in at the Best Friends Pet Adoption Center in New York, which serves as a mission center and a home between homes for adoptable pets from Best Friends and our partners.

“The opportunity (to partner with the Best Friends’ adoption center) has increased our adoptions and made it possible for us to rescue even more shelter cats.” says Jo Ann.

Soon after his arrival at the center, Teddy met an adopter who didn’t see him as an underdog, but rather as the winner of her heart. Kristin came to the adoption center looking for some feline energy to balance out her home she shares with two dogs, and was immediately drawn to Teddy. 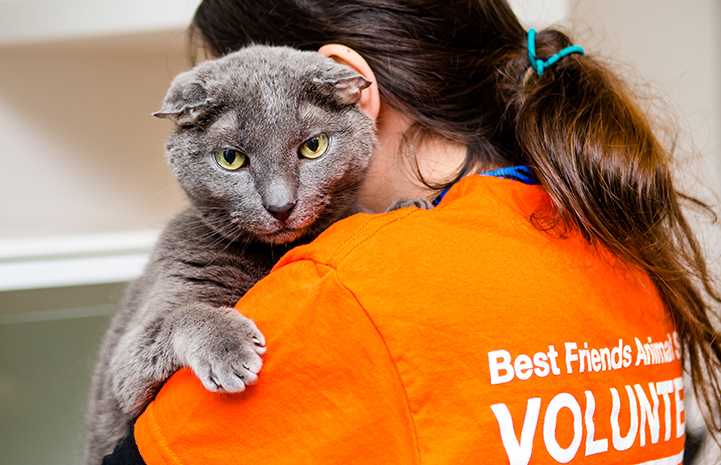 An instant connection to a cat who needed a home

With his unusual ears, big round eyes and love of conversing in meows (loudly because he can’t hear), Teddy was a staff and volunteer favorite at the center, and Kristin became an instant fan as soon as she met him, too.

“He really is the most friendly cat I have ever met,” says Kristin, who wasn’t intimidated when she learned Teddy needed a special diet and daily medication to manage his thyroid disease. “I felt I could make him feel comfortable and happy for the rest of his life. He deserves it.” 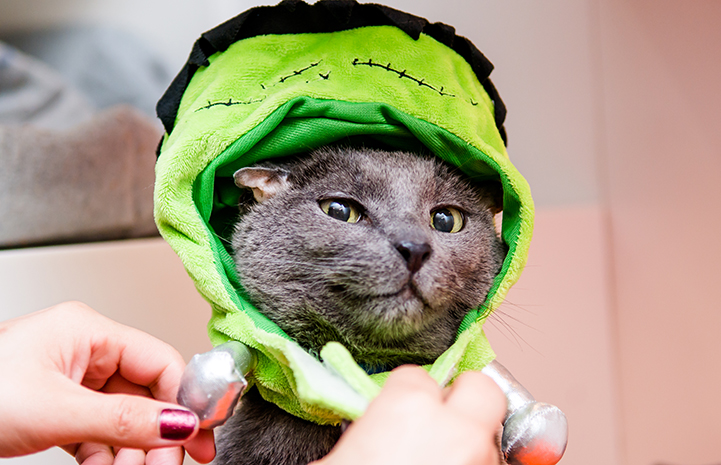 A cat fits right in at his new home(s)

Teddy settled in to his new home easily and gets along great with his new canine buddies. And Kristin says that since Teddy is deaf, he’s not easily started by much, which contributes to his calm demeanor.

Now Teddy enjoys spending summer weekends on the beach with Kristin’s family at the beach house, just like a true New Yorker. “There’s a total of five dogs and two cats between us all,” says Kristin. “It's quite a group which he fits in very nicely with.” 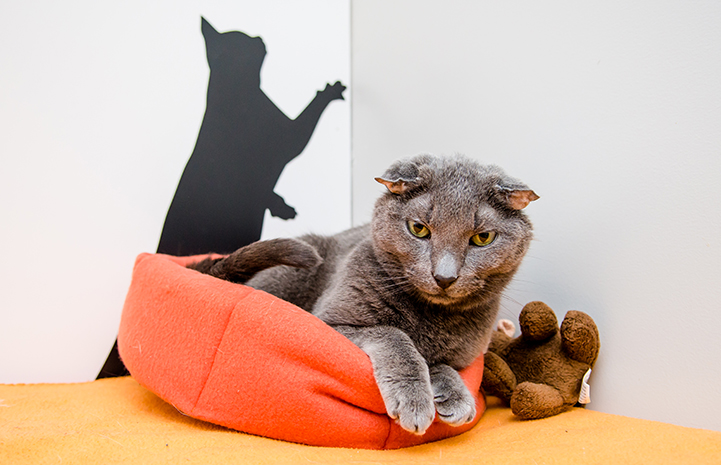 Helping a cat with an overactive thyroid

Teddy has feline hyperthyroidism, which can cause hyperactivity, thirst and weight loss. To help manage Teddy’s symptoms, Kristin gives him a pill twice a day. His condition is also managed by testing his blood every few weeks and adjusting his medicine based on the results. He also gets regular B-12 injections.

Thyroid disease in cats can be difficult to manage, but Teddy is doing great. “The results have been good the last few months, so we are very happy,” says Kristin.

“His favorite place is definitely sitting in the window sill,” says Kristin. “He enjoys sitting and looking out the screen window, feeling the breeze and watching the birds even though he can't hear them.” 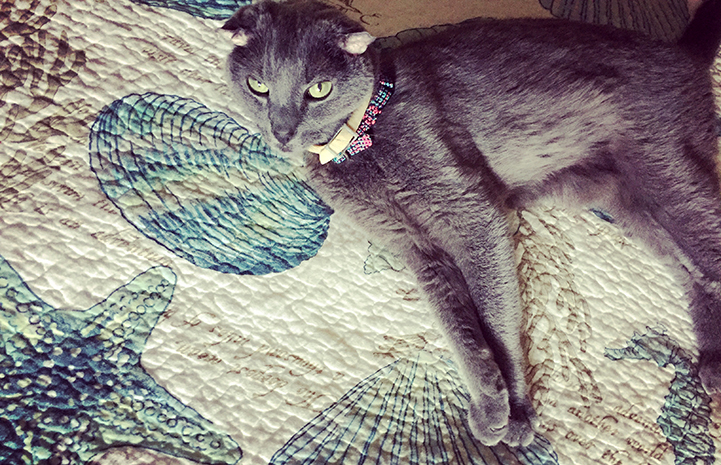 Lesson from a cat: Love heals everything

Kristin says that Teddy has taught her that even though bad things can happen in life (and even scar you physically), love can make the emotional scars disappear.

“He loves all people and animals, which I think is why he has been able to fight through his injuries and disease to enjoy life to the fullest,” says Kristin. “He has been through a lot, and I am so grateful to have found him.”

Photos by Stacey Axelrod and Kristin