How an entire team came together to help a boisterous dog

One of Peter Vega’s favorite photographs is of a dog named Tyler sitting on a beach looking out at the ocean. Whenever Peter, a Best Friends volunteer, sees the photo he gets a little emotional because he knows the story behind it. It’s a story about believing that anything is possible with love and hard work, and a story of how a team of people came together to help a once-homeless dog finally get his day in the sun. 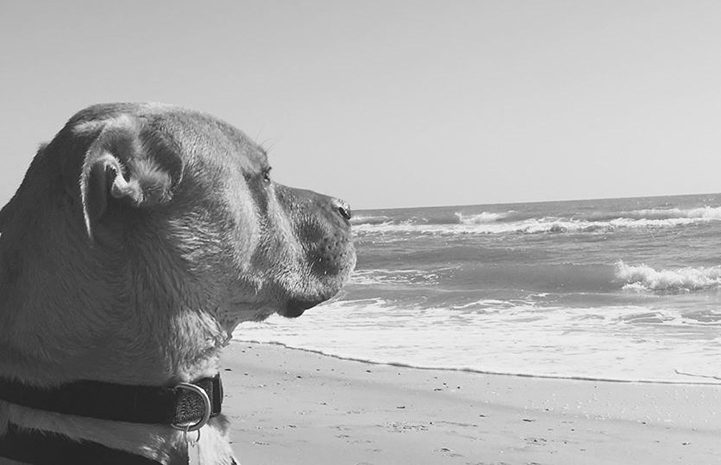 “His heart is as big as he is,” says Peter, who spent countless hours working with Tyler to rein in some of his exuberance for life and everyone he meets. “He just needed help from people who would never give up on him.”

Helping an energetic dog settle down

Tyler is a big happy dog who thinks everyone he meets is his best friend. So, he must have known he was in the right place when he first arrived at Best Friends in New York after losing his home and ending up at Animal Care Centers of NYC.

At Best Friends, Tyler wasted no time jumping on everyone he met — Tyler’s version of a bear hug. Some lucky people even got licks, and lots of them. “He’s a big dog but he still thinks he’s a puppy,” says Kristi Adams, foster and adoption coordinator for Best Friends in New York.

Tyler just doesn’t know his size. When he first met Peter at an adoption event, he was so excited that he stepped on Peter’s foot, which hurt just a little. But that’s all it took for Peter to know he wanted to help the big guy. At that moment, Tyler’s day at the beach got a whole lot closer. 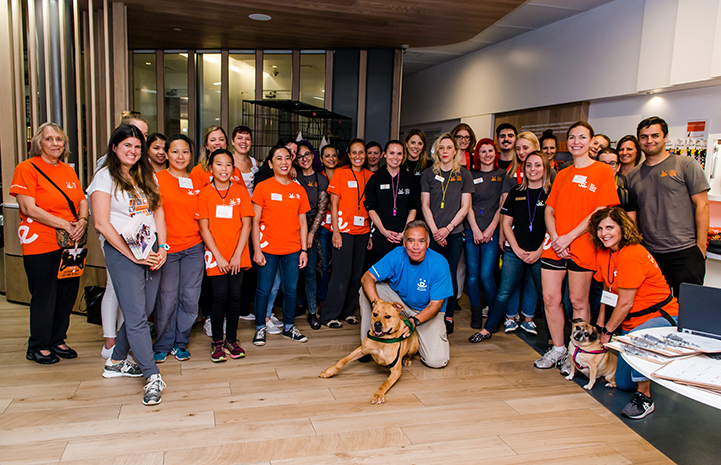 Peter began to visit Tyler at least four days a week, putting in a couple of hours walking and training him before logging long hours at his job with the New York Police Department. Some days when Peter and Tyler would go for runs in the park, Peter would bring his dog, Brody, with him and the two became like brothers.

Over time, Peter helped Tyler learn how to stay calm and obey basic commands. Tyler also learned how to greet people without jumping on them and how to walk and run without pulling strongly on the leash.

Still, it would take a while before Tyler would find the right home. He was adopted one Christmas, but by the new year, he was back with Best Friends. When Peter saw that Tyler’s adoption didn’t work out, it only strengthened his resolve to help this big sweet dog someday wake up on New Year’s Day in a home he would never leave. “You don’t give up on these guys,” says Peter.

No one was giving up on Tyler. His struggles with adoption just made everyone more determined. When Michele McLeod, a dog trainer with Best Friends, learned that Tyler was back, she offered to foster him at her farm in Connecticut, where he would have a big yard to play in and receive more training to prepare him for the day that he would have a yard of his own. 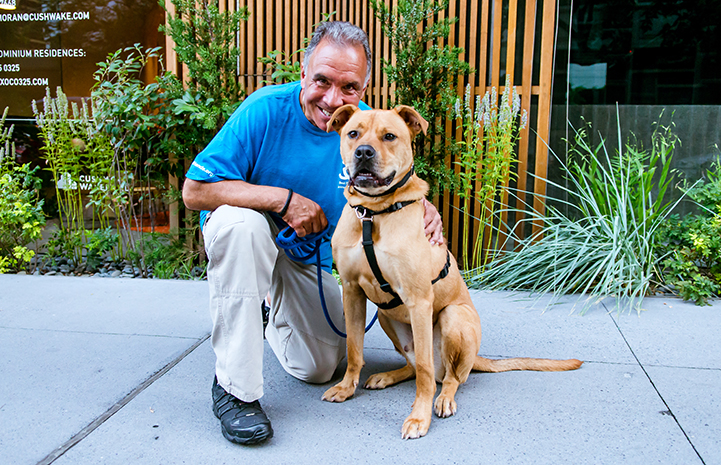 Michele says the biggest thing Tyler needed to work on was impulse control. He needed to learn how to stay calm and how not to react. “He went tons of places with me, and he loved to sit in the back seat of the car,” says Michele, who would feel Tyler’s head resting on her shoulder when she drove to one of their many favorite places.

She even took him to a sporting goods store — the ultimate test for a dog to contain his excitement. Tyler not only had to remain calm around shoppers, but also had to stay cool after coming face-to-face with a grizzly bear (not real, of course), who he desperately wanted to be his friend.

Like Peter, Tyler found in Michele a staunch advocate. She started posting handouts around town to let people know that Tyler was ready to be adopted. Michele lives in a small, close-knit community and soon everyone in town knew it was “Tyler time,” as in time for this big guy to find his home. 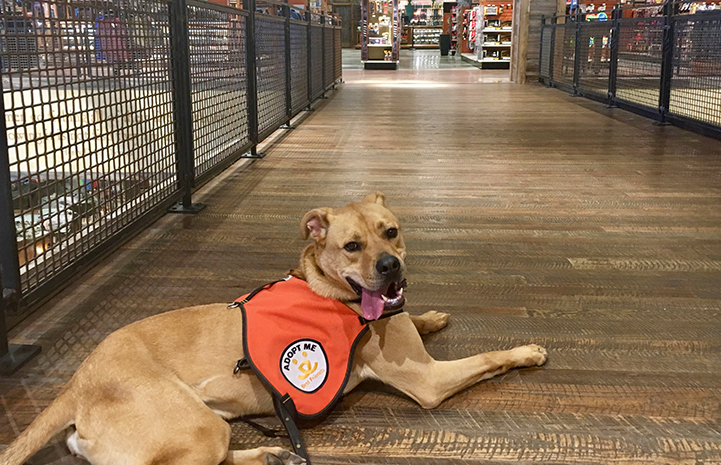 The perfect home for a fun-loving dog

When Jaclyn saw a handout of Tyler at the local creamery one hot summer day, her heart melted about as fast as the ice cream she was holding. She and her boyfriend James were captivated by Tyler’s handsome face, but most important of all, by his story.

She and James couldn’t believe it when she learned Tyler was still looking for a home. Soon, a Best Friends team that included Peter brought Tyler over to Jaclyn and James's home so they could meet him. And as soon as they saw him, they knew they could give him the home he’d been waiting for. 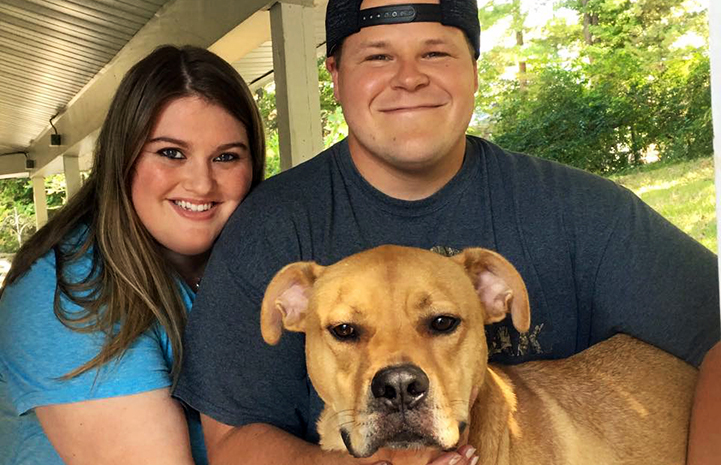 Today, Tyler has his very own backyard, his very own bucket of toys, and his own family — complete with a cat named Zoey. He loves hiking with James and playing with his new mom. “He is so beautiful and lovable,” says Jaclyn. “When I look at him I get tears of joy because I know he will never have to worry again about where he’s going next.”

Jaclyn even started a Facebook page for Tyler, so that all the people who were rooting for him can keep up with him and his sweet new life. 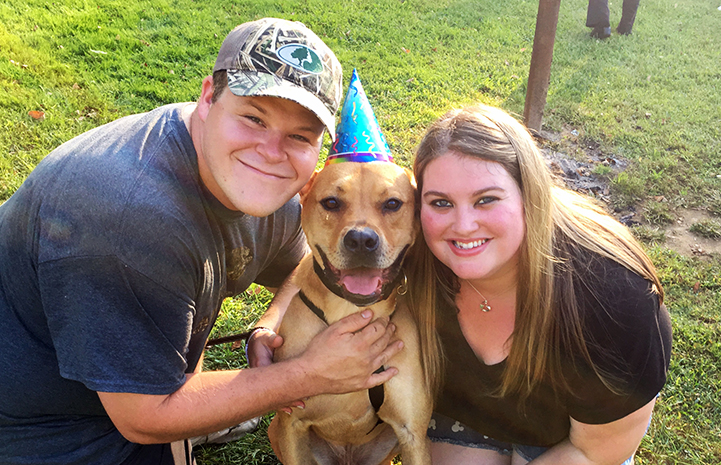