How to help a fearful dog gain confidence in new places

Image
Dog who was found as a stray in a forest gets specialized fearful dog rehabilitation, which includes fun outings and exposure to new experiences.
By Christelle L. Del Prete

With his big solid body, happy-go-lucky expression on his face and his endearing habit of offering people his paw, Ledger certainly doesn’t seem like a timid dog. He even has a survivor story, because before he came to Best Friends Animal Society, Ledger was found alone, wandering around a national forest. 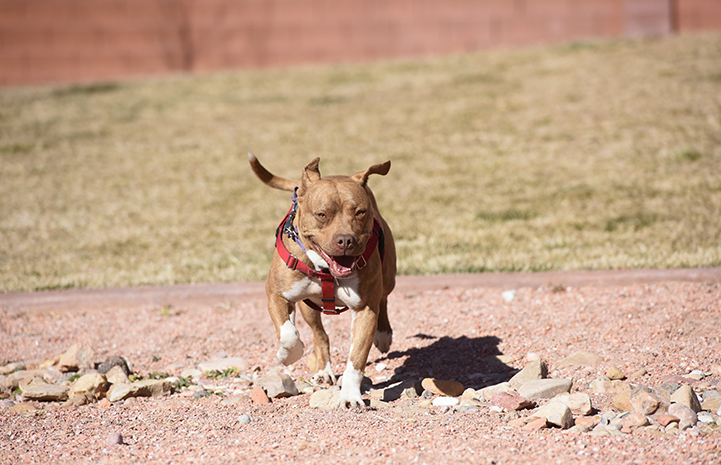 Though no one knows how Ledger ended up in the wilderness or what he experienced during that time, but when he got to the Sanctuary he made it clear that he wasn’t the adventurous type. Once he’s comfortable in a place, Ledger is perfectly content to stay there. Because when it comes to new places, he faces a whole new set of challenges.

Whenever he’s in an unfamiliar place, Leger starts to show some fearful dog body language: His big smile fades, he tucks his tail and he lowers his muscular body to the ground. Instead of exploring the new territory, he wants to run right back to familiar places that he knows are safe.

Some of life’s best adventures come, however, come from stepping out of one’s comfort zone, and Ledger will be far more prepared for a home of his own if he’s not so nervous about the world. So Dogtown caregivers and volunteers are working hard to help him do just that. Tim Diantonio, a Dogtown volunteer when he’s not working as a part-time staffer at Best Friends, is one of them. ​

Tim got to know Ledger while he was volunteering at the Clubhouse, the area in Dogtown where Ledger lives. Soon, the two became good friends. “I was going over to the Clubhouse to work with some of the dogs there,” Tim says, “and I just fell in love with Ledger and kept going back to spend more time with him.” 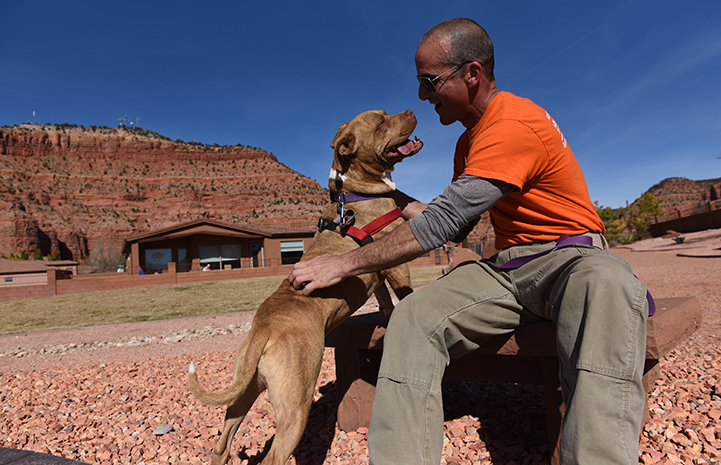 The feeling was mutual. Ledger clearly trusted Tim, and since he tends to look to people he trusts when he’s feeling uncertain in new situations (and he happens to love car rides), Tim had an idea. Why not take Ledger on some outings and help him overcome his fear of the unknown?

They started out small with trips to fun places around the Sanctuary, including Angels Landing, which is just a short drive from Dogtown. Ledger and Tim then began branching out. They left the Sanctuary and drove to the Best Friends Visitor Center in Kanab. 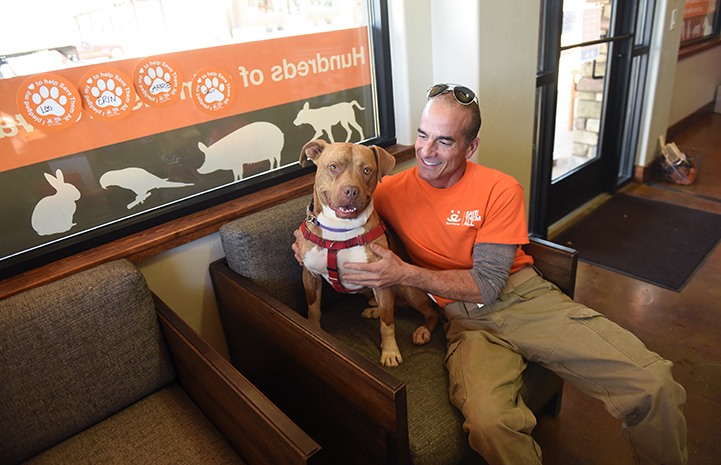 This trip was much more challenging for Ledger. For as welcoming as the visitor center is, he wasn’t all that interested in stepping through the doors. He planted his feet to tell Tim that he’d rather just wait outside. But, because Tim is patient and he knows how to calm a nervous dog, he eventually coaxed Ledger inside with plenty of treats and praise. 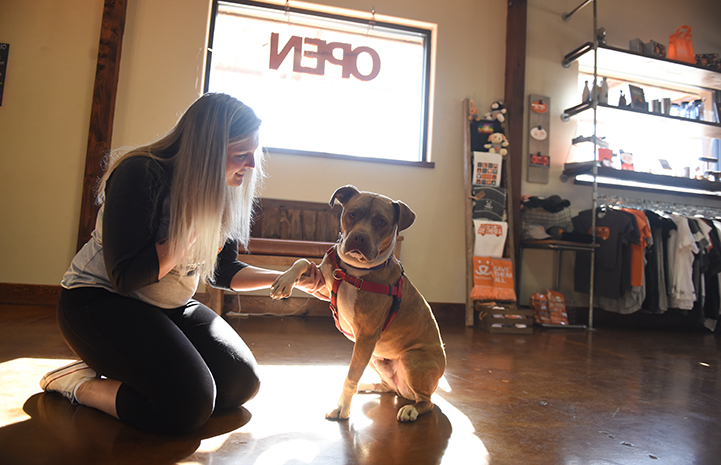 Ledger didn’t fall in love with the visitor center right away, but after a few more visits, he relaxed and started walking around the building with a lot more confidence. 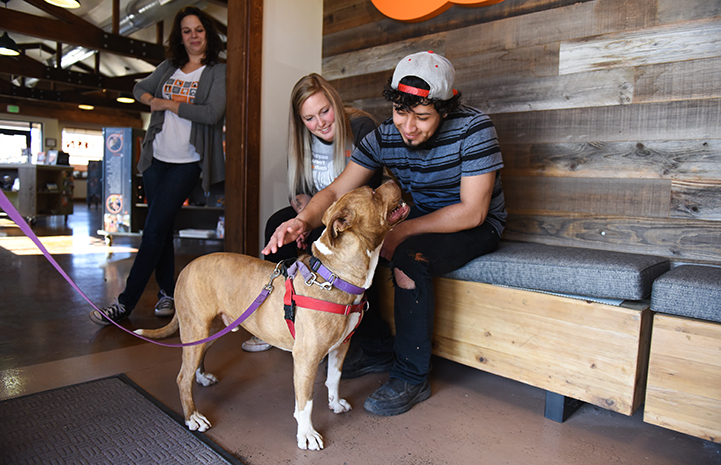 Finding fun in the world

There were two other places that Tim wanted Ledger to experience: the indoor common area and the dog park in the small community where Tim lives. Both were spaces where Ledger would be safe and welcome. But just like the visitor center, Ledger needed some gentle encouragement before he felt comfortable going in and looking around. 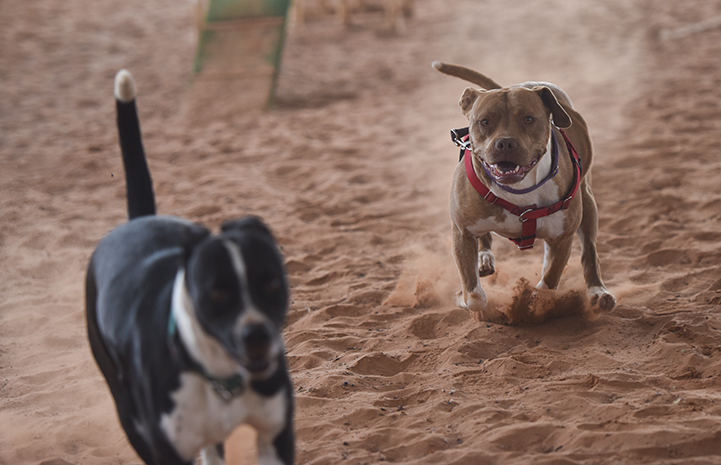 “New things and new noises are hard for him, but he just needs to establish a routine,” says Tim.

That routine now includes greeting people in Tim’s community, sniffing around the dog park or hanging out on the couches in the common area at least once a week. Now, whenever Ledger sees Tim’s car, he gets excited. That’s because, with his good friend by his side, Ledger is learning that “new” doesn’t have to mean “scary” and that there’s lots of fun waiting for him out there in the world. 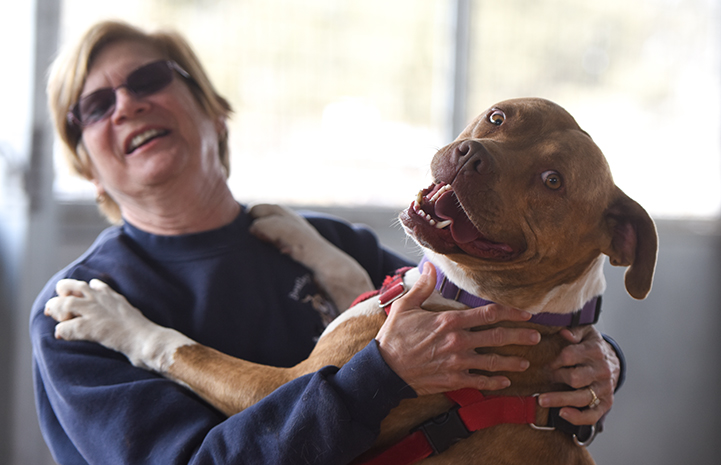