Image
See why a Los Angeles couple fell for a shiba inu mix who waited six years for a home.
By Kelli Harmon

For years, the best way to describe Brownie’s situation was: It’s complicated. Brownie is a pretty dog who’s the color of a toasted marshmallow. She’s not especially big or small. She’s not much of a barker. She doesn’t have major health issues. You wouldn’t think it would take six years for her to be adopted, but that’s Brownie’s story, because, well, she is complicated.

After losing her home in 2013, she ended up at Los Angeles Animal Services, and from there went to the Best Friends Lifesaving Center in Los Angeles.

That’s where she stayed. And stayed. Brownie was at the center so long that she became an unofficial mascot. And she was a heartbreaker, because all anyone wanted was for her to get adopted. Finally, after a six-year wait, she’s is happy in her new home.

Losing the only home you’ve ever known is hard on any dog, but for Brownie it was a nightmare. She has separation anxiety, so living in a place where people come and go all day long (and then leave for the night) was terrible for her. You might think the solution would be to have Brownie go to a foster home or have people stay with her, but even that was impossible. Remember, with Brownie it’s complicated. 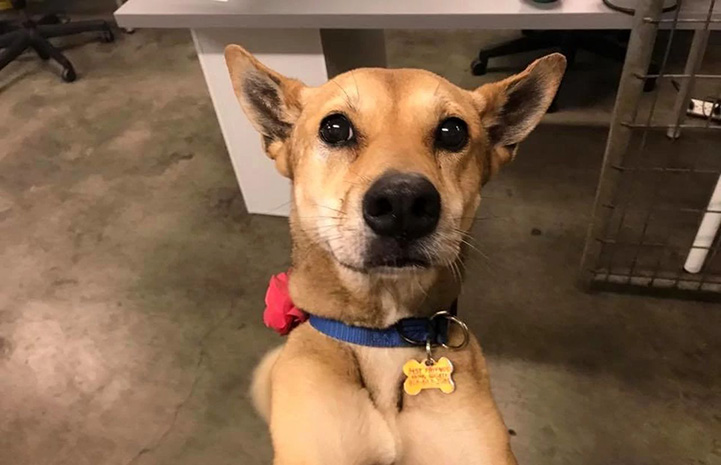 Brittany Sorgenstein, senior manager of operations for Best Friends in L.A., says that in addition to extreme separation anxiety Brownie takes an inordinate amount of time to get comfortable with people ― the longest she’s ever seen. For example, if she felt the slightest bit uncomfortable or if someone looked at her wrong, Brownie would scream. (And most people made her uncomfortable.)

Brownie also couldn’t stand to be left alone. She would pant, drool and even claw the walls and door until she hurt herself. The staff tried everything possible to relieve her anxiety and prevent her from injuring herself. “We found that if Brownie stayed with people in an office, she was a bit more manageable,” says Brittany. Keeping a reliable schedule that Brownie could count on also helped. But she was still wary of people and it didn’t take much to send her into a screaming fit.

Eventually, Brownie reached a turning point. A staff person figured out that she loves car rides and fast food. So, every day he leashed her up and invited her to hop into the car. She became an aficionado of all the drive-thru and she’d made a friend. But she was still Brownie. 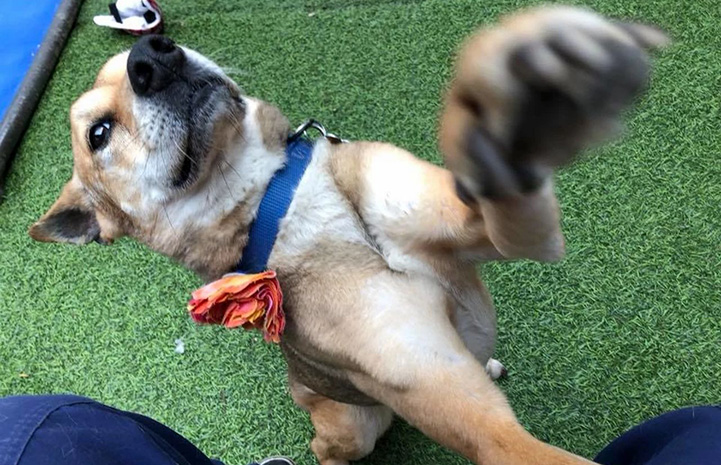 Staff members and volunteers were well aware of her quirks and only certain people took her on walks and fed her meals. Over time, she made friends with more staff and volunteers — slowly and one at a time. Brittany says, “If you were finally accepted by Brownie, it would be the most rewarding day of your career. She would come up to you and place her paw on your leg or your hand. You would not be allowed to touch her or look at her, but you could sit still and just accept her tiny gesture.”

This would also vary by the day. Just because she allowed you to touch her paw once didn’t mean she would allow it again. Over time, she would let her friends close their hands around her paw and eventually pet her ― but again, on her terms. It took a year before Brownie granted Brittany permission to touch her.

It was clear that people couldn’t make Brownie do anything, and one couldn’t rush trying to make friends with her. When people could exercise restraint and let Brownie decide over a long period of time whether she wanted to be friends, she’d show a different side of her personality.

“She would wiggle her whole body and cry when she saw you,” says Brittany. “She’d bring her stuffed fox and drop it at your feet, and may even let you throw it for her as long as you didn’t try to take it away.” 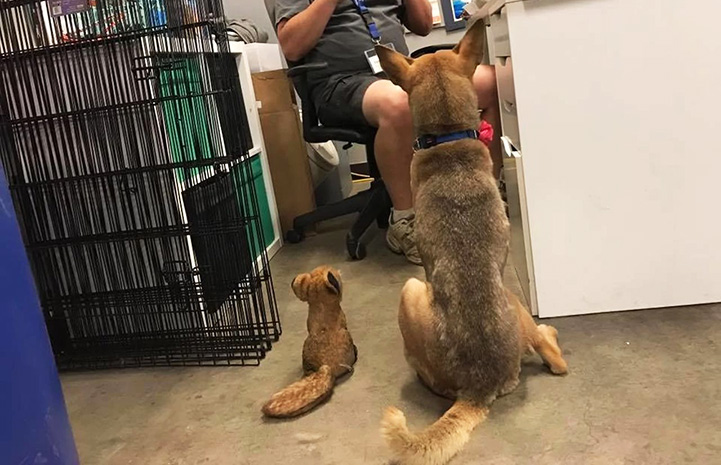 How do you find a home for a dog who might take a year to accept a new person, and who screams whenever she’s uncomfortable? Well, for a long time, that was the issue. For six years her home was the lifesaving center and she was available for adoption the whole time. But no one in her inner circle could take her home, and finding adopters capable of handling her began to feel impossible.

“Even if she were a fan of yours, taking Brownie home would be a full-time job,” says Brittany. “She didn’t like other dogs and basically acted feral. You wouldn’t be able to leave her home alone and you would need to heavily manage any visitors coming to your home. Since she looked so sweet, people would often try to approach her in the dog office and would immediately understand why she had been with us for so long.”

In the 30-plus years since Best Friends Animal Society began, one truth has been proven again and again: There’s a person for every pet. It might take a long time to find someone to embrace a dog with Brownie’s complications, but it’s always been worth the wait. 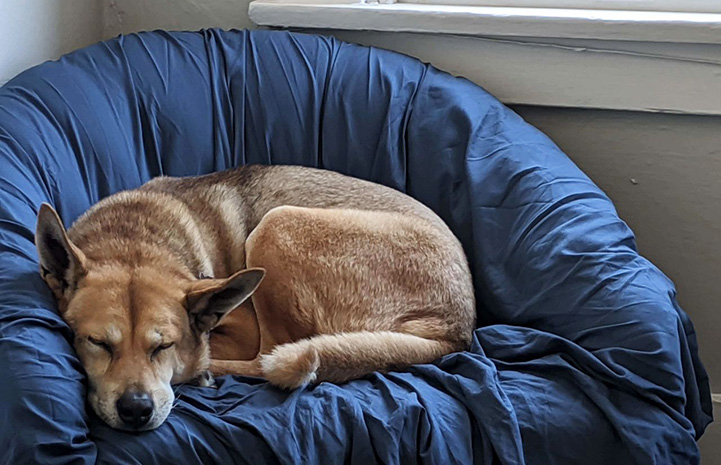 For adoption: one shiba inu

Over the years, a few people inquired about Brownie after seeing her photo on the website. But when they learned that life with Brownie was complicated, they always moved on — that is, until Jonathan and Elizabeth Bay inquired.

Jonathan wanted a shiba inu, and Elizabeth’s requirement was that they adopt rather than buy a dog. While Brownie is a mixed breed dog, it’s likely that she’s part shiba inu. In fact, blood-curdling screams are a characteristic of the breed. When the adoption team explained things on a phone call to Jonathan and Elizabeth and they still wanted to meet her, Brittany says she didn’t let herself get excited — yet. “I thought, well, they don’t truly understand.”

The initial meet-and-greet with Jonathan and Elizabeth went well until Brownie got overwhelmed and screamed. Brittany says, “I thought well, that’s that.” But Jonathan and Elizabeth were undeterred. Says Jonathan: “After we learned how long she’d been there, and knowing that we could provide a stable space for her, it didn’t feel like our choice. It was up to her to decide whether she wanted to live with us.”

After several visits from the couple, Brownie started to get excited whenever they showed up. She even let them leash her up for a walk. “They were so patient with her and never rushed the process,” Brittany says.

“Each time we came to see her, we thought maybe this time she won’t like us,” says Jonathan. But that didn’t happen. The slow getting-to-know-you process suited Brownie just as well as it did Jonathan and Elizabeth. “The more we visited her, the more we understood why she did what she did,” Jonathan says.

Eventually, the staff arranged for a volunteer to take Brownie to visit the couple in their home for the day. When that went well, they tried a sleepover. It was the sleepover that helped the trio make their decision. Brownie was content with them. They understood each other. With that, the impossible happened: Brownie had a new home. 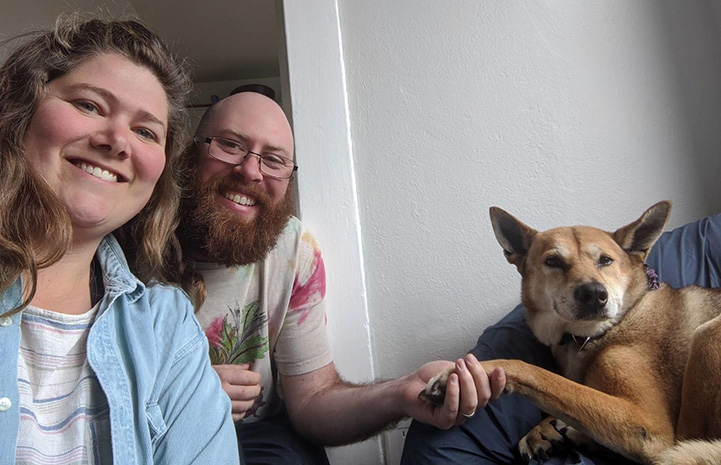 Brownie has settled in and is truly relaxed for the first time in a long time. “She was clearly delighted when we didn’t go away at night,” Elizabeth says. “She sighs to let us know it’s bedtime and we’re keeping her up too late. She uses her toys as pillows, and she gets offended when we don’t let her lick our plates after a meal.”

Not only is Brownie thriving at home, she’s full of surprises. Jonathan says there are a lot of things they can do now that they didn’t know if they would ever be able to do ― like touching her. She accompanied them on a road trip and they stayed at other people’s houses (before COVID-19 affected travel and visits). Brownie handled it better than expected. She not only still enjoys car rides, but she loves trips to the beach and the mountains. 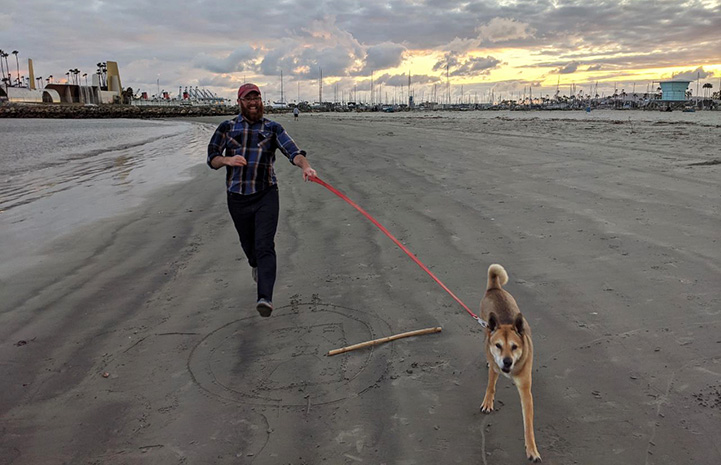 Now that Brownie is in a home, some of the less-desirable traits she was known for have disappeared. It used to be a challenge to get her to eat, and sometimes she’d refuse to walk. But at home with Jonathan and Elizabeth, she’s gained 15 pounds. Jonathan says, “She loves to play now and gets zoomies. She seems like a normal dog now, except occasionally she gets overdramatic.”

The couple often sends photos of Brownie to Brittany and the staff in L.A.. Some had given up hope that anyone would ever adopt her, but they’re thrilled to be wrong. Brittany says, “To see her feel so comfortable with her family and be able to go out on adventures has been truly incredible.”

It turned out that the right fit for Brownie was to be with people who had lots of patience, no other pets, kind hearts and the ability to embrace challenges. Jonathan says, “We seem to accidentally do hard things. It’s just who we are. We just finished our PhDs.”

“I'm so happy we found her,” says Elizabeth. “And I love her because it really has been a journey of developing trust and patience with each other.”

Brownie’s life these days is anything but complicated. While she was safe and loved at Best Friends, it wasn’t an environment where she could truly thrive. Now, her people in her new home love and understand her, and she loves and understands them right back. 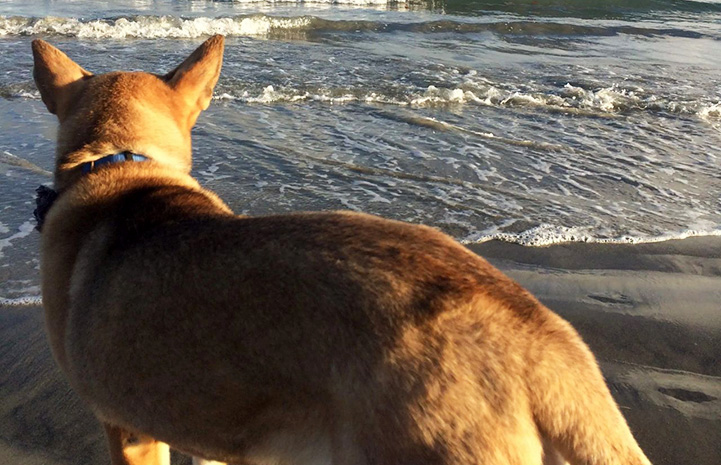 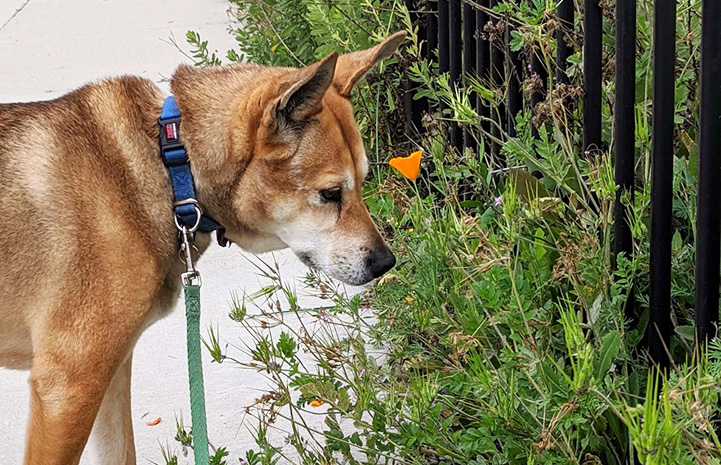 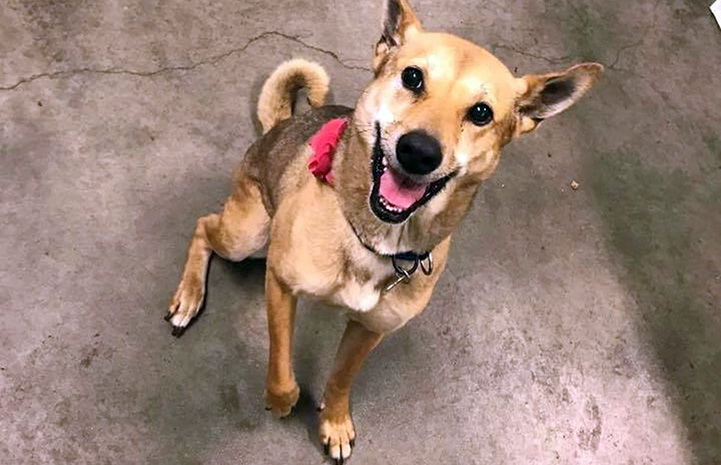 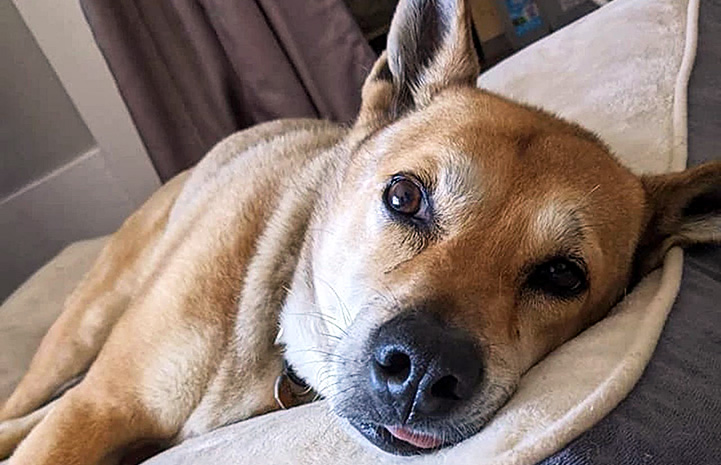