How a reactive dog became a drive-thru favorite

Image
Lab mix dog learns to control his aggressive and lunging impulses and behave nicely around new people and when on leash. He has made great progress.
By Christelle L. Del Prete

Barnaby is a big, playful love bug when he’s among friends. Always happy to see people he knows at the Sanctuary, he’ll flop over onto his back for belly rubs from them. In the dog park he’s goofy ─ running and jumping into the doggie pool after a big blue ball, which he pushes around the surface of the water with his nose.

That’s the side of Barnaby that you’ll see regularly ─ once you’re in his inner circle. But if he doesn’t know you, stand back. He’s a bit concerned about stranger danger. For a long time he believed it was his duty to protect himself (and his friends) from potential threats ─ even people he didn’t know was a potential threat.

Like other dogs who feel the same way he does about strangers, Barnaby will stage a big scary show to warn people to stay away. Strangers may see a dog lunging on leash or a dog charging in their direction. Instead of having a smile on his face, Barnaby will be barking and growling. Leash-reactive dogs like Barnaby usually have leash anxiety — that is, all the barking, growling and lunging usually stems from anxiety and fear, rather than aggression. And those who have seen the kind, gentle soul behind all of the tough-guy posturing know that Barnaby really doesn’t want to hurt anybody.

But the Labrador retriever and Doberman pinscher mix is a big dog who was making a pretty terrible first impression on people, as well as scaring away lots of potential friends. While Barnaby was happy with his social circle in Dogtown ─ which included trainers, caregivers and a few experienced volunteers ─ he needed help feeling more comfortable around unfamiliar, real-world faces that he feared or didn’t trust. 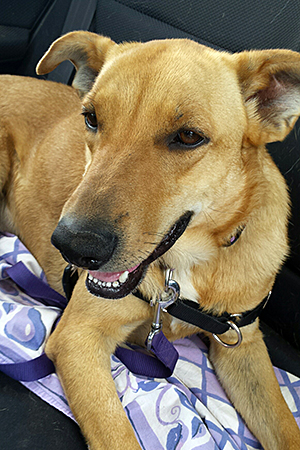 That’s when Dee Willner, a dedicated volunteer who spends half of each year living in Kanab, Utah, so she can spend five days a week volunteering in Dogtown, stepped in to help. Under the guidance of Barnaby’s caregivers, Dee started taking him for car rides into the town of Kanab, which is just minutes from the Sanctuary.

Visit Kanab and the Sanctuary

A grocery store parking lot might not be the first place you think of for training reactive dogs, but it proved to be a great starting point for Barnaby. It was safe because Barnaby couldn’t get out of Dee’s car, and there was a good barrier between him and anyone who might wander too close for comfort. He and Dee simply sat in her car at the back of the lot and watched people coming and going. If he was calm when they walked by, Dee would reward him with yummy treats.

Eventually, Dee was able to park in a more central location where Barnaby could see more people going in and out of the store. He no longer barked or growled, but simply watched with interest. Dee knew then that he was ready for a bigger challenge.

Since Barnaby was OK with a busy parking lot, why not try the drive-thru? That way, Barnaby would see people very close to the car window and begin to associate them with delicious treats. One Sunday, Dee chose a popular fast food restaurant in town and decided that, if it went well, she and Barnaby would make it a weekly trip.

At first, Barnaby wasn’t at all happy to see a smiling, cheerful person pop out of the drive-thru window and hand off the goodies to Dee. But once he got a whiff of what was inside the bag, Barnaby decided he just might like this game. He calmed himself and got his treat. The following Sunday (and then the next) he again went through the drive-thru with Dee again.

Now, months later, Barnaby and Dee have a solid tradition. Sundays are drive-thru days, and they are a cakewalk for Barnaby. He’s become a favorite of the restaurant employees, and he has no problem seeing them in the window. He just lies calmly in the back seat of the car while he and Dee are waiting for their food. “He is coming around and is a love,” says Dee. The people who regularly serve them at the drive-thru have noticed the change. Barnaby has gained trust and warmed up.

“This has been huge for him,” says Dogtown caregiver Samantha Woyak. “He is a changed dog. Now he looks forward to seeing people instead of feeling like he has to protect himself from the outside world.”

Of course, Dee is one of the people Barnaby looks forward to seeing the most. “He melts and starts whining when he sees her,” Sam says. “He loves her so much.” And that’s how Barnaby is: rough on the outside but soft and sweet on the inside.

When it comes to people, he will always have his favorites. He’ll still sometimes act like a reactive dog on leash or start barking at people when he’s in the car. But, more and more, he’s learned to relax around strangers. Now, more people get to become his friends and to see the real Barnaby — the one who jumps into the doggie pool after a ball or stretches out on his back for belly rubs.

Be a part of the good news by supporting Best Friends