Rambo may be shy, but that doesn't stop the tabby cat from living an Insta-worthy life with his new brothers.
By Drew Schott

Eight years ago, Rachel Waters moved from the Georgia woods to New York City. Joining her on the 900-mile excursion were four cats that Rachel rescued after finding them wandering around her neighborhood. In December, Eabie, the last of the four who Rachel called the love of her life, died at age 23 ½.. Rachel desperately missed the fun, excitement and affection that her cats brought to her home.

Lord Toranaga came to Best Friends from Homeward Bound, a Best Friends Network partner organization located in Blackwood, New Jersey. Back then, he was known by an equally impressive name: Rambo. But he wasn’t much of a tough guy when he first arrived at the center. In fact, adoption specialist Amber Bonds says that, at first, he was very nervous.

“He definitely did not want to be our friend right away,” says Amber. “He was pulled all the way back into a corner as far as you could, sitting like a statue.” Rambo’s apprehension didn’t last long, and although one of his back legs is atrophied and shorter than the other (likely since birth), he loved climbing the cat towers, sleeping in the big windows in the front of the center and watching the people walk by.

While he played, you’d have to look closely to notice that a portion of his back left paw was missing — something he never let hold him back during playtime. “It never seemed to bother him,” says Amber. “He would still jump around … If anything, there was a tiny little difference in the amount his hips moved. I really don’t think he ever noticed it.”

Just as Rambo was settling into his new environment, the spread of COVID-19 required Best Friends to move pets out of the adoption center and into foster homes. Rambo hit the jackpot: He went home with Amber. 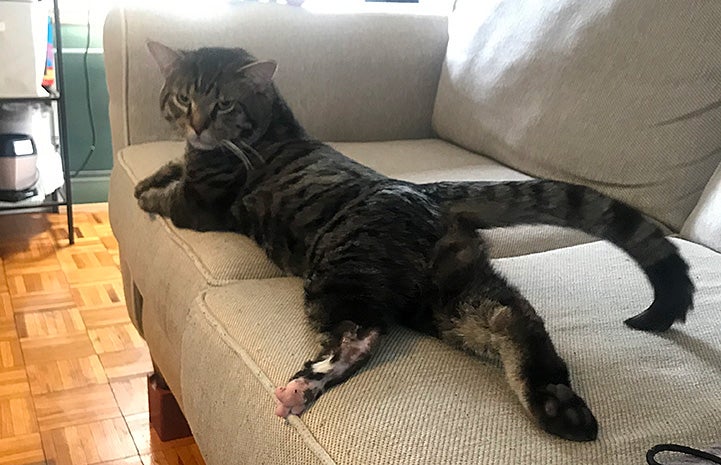 After a few days, Amber discovered that Rambo was now the boss. “We played by his rules,” says Amber. “If he wanted us to pet him, we’d pet him. When he told us to stop, we stopped. We just tried to pick up all his cues.”

Amber made her home as comfortable as possible for Rambo, who loved exploring different rooms and jumping on the couch. She also instituted occasional playtimes when she would swaddle him and play with his paws. One of his favorite toys was a stuffed bird attached to a string. As Amber moved the bird in all different directions, Rambo would jump around trying to catch it with his front paws.

Amber and Rambo quickly developed a strong bond. He was often in her lap while she worked on her computer or took Zoom calls. The two were so close that whenever Amber left the apartment, she could hear him cry. This prompted her to take Rambo on trips downstairs to get the mail. “He definitely has a lot of personality,” says Amber. “He’s very much a big presence.” 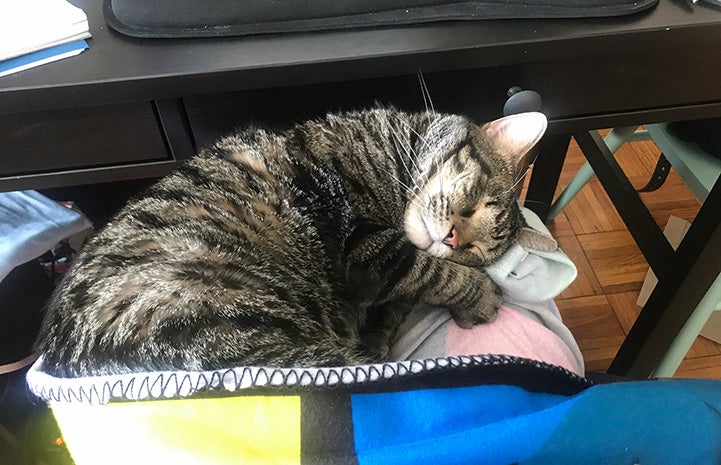 When Rachel saw Rambo’s profile on the Best Friends website, she felt an immediate connection and could not stop looking at his photo. “My Eabie, who died in December, was also a brown tabby,” says Rachel, “so I have a soft spot in my heart for them.”

As part of her adoption application, Rachel wrote a genuine letter that explained how the green-eyed feline was “tugging at her heartstrings.” She could not stop thinking about Rambo, so she was ecstatic when Amber invited her to a virtual meet-and-greet.

It was the perfect fit for Rambo. Since Rachel had a history of giving middle-aged tabby cats a loving home, she naturally felt comfortable keeping a close eye on Rambo’s hind paw, which is more prone to infection and pain.

In May, Rachel rented a car to go pick up her newest family member, whose life was about to change forever — starting with his name. In honor of a character in the novel and popular 1970s TV miniseries, Shogun, Rambo became Lord Toranaga.

When Lord Toranaga arrived at his new home, two new feline friends, Chicharrón and Vincent, were there to meet him. When they met, Lord Toranaga immediately took to Vincent, the younger one who is less than a year old. To greet his new housemate, Vincent flopped on his belly in excitement to signify the beginning of a special friendship. Today, the brothers often groom each other and they also sleep together, either in the living room or on Rachel’s bed.

According to Rachel, Lord Toranaga is still a little afraid of Chicharrón, a large tomcat; however, she says their relationship is growing stronger by the day.

All three kitties share a unique bond: They have an Instagram account. After Chicharrón’s adoption, Rachel shared cute snapshots of the 15-pound kitty in Facebook groups and she says the posts often went viral. So, she started an Instagram account to showcase her rescued cats with cute photos of their daily activities, such as playing with toys, sleeping on the couch and sitting on the windowsill.

“We can document our growing family,” says Rachel. “All of them have such funny personalities and they’re so expressive. Especially during a pandemic … we wanted to create a place where people could find a little bit of respite from the world.” 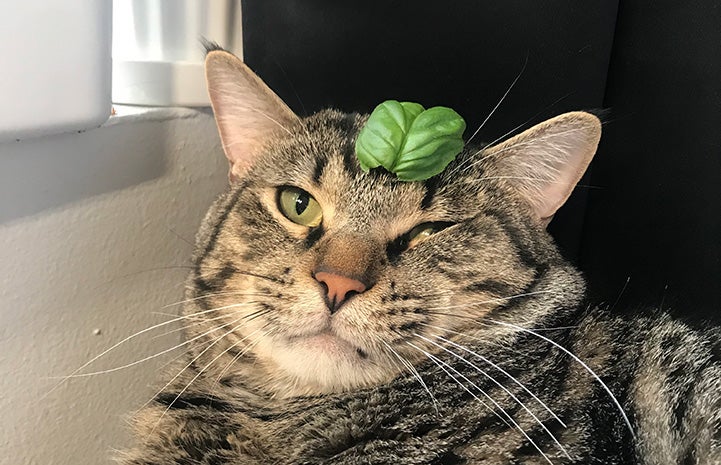 A big new world for a former shelter cat

Rachel says Lord Toranaga has relaxed a great deal since his adoption. For example, he was previously shy around strangers at Best Friends, but now he enjoys meeting new people and even sits on their laps.

He’s also very close with Rachel’s partner, Chet Hay, who often spends time swaddling the brown tabby in his arms. Lord Toranaga loves sleeping on Chet’s desk while he works, and the two even share a glass of water now and then. Chet is buying a cat backpack so the cats can join them for adventures in the big, wide world of New York City. 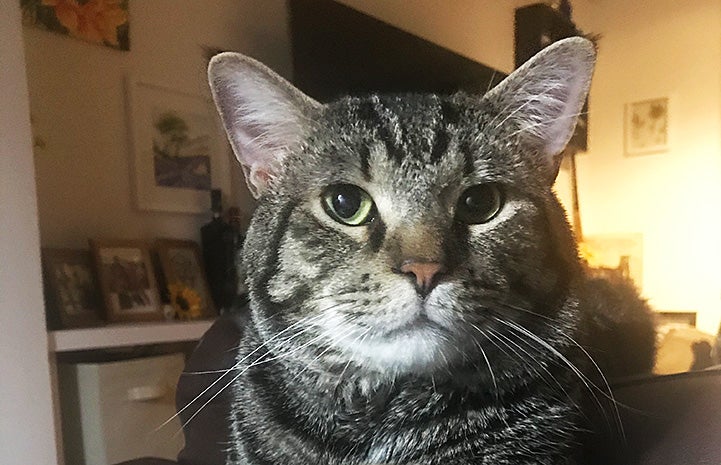 Rachel says her cats remind her of all the good and happy things in the world amid these troubling times. She hopes they understand how much she loves them and that they will always be safe and protected with her.

After a long journey (from New Jersey to New York, from Rambo to Lord Toranaga), the tabby with light green eyes is finally realizing he has a home. “He is learning that he has a stable place with cat friends and humans,” says Rachel. “He will never, ever end up in a shelter again. I think he’s just now starting to realize that. We’re not going anywhere.” 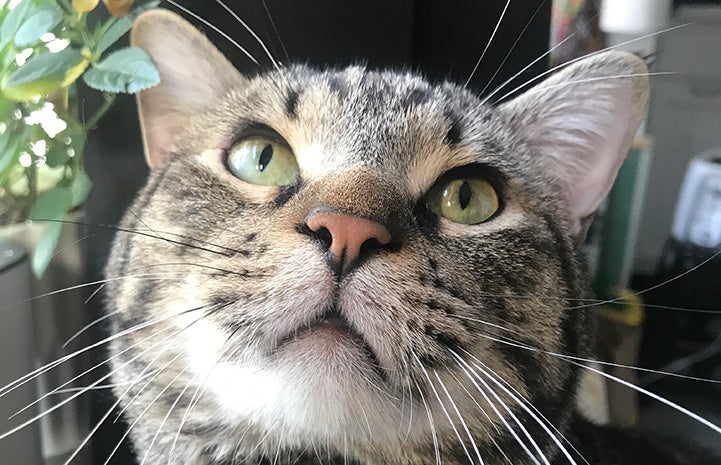