Image
Story of a feral horse who came to Best Friends Sanctuary for training and taming.
By Christelle L. Del Prete

When Scarlett came to Best Friends just under a year ago, she was truly wild. The young mustang had been living at a wild horse sanctuary in Nevada, where she was one of nearly 100 free-roaming feral horses. For the first two years of her life, Scarlett felt the wind in her mane and the grass under her hooves, but never the touch of a human hand.

That free-spirited life would have suited Scarlett just fine had she been able to stay where she was. But the wild horse sanctuary closed, and suddenly she and the other horses were at risk of going to auction. Luckily, they moved into a temporary facility while their caregivers reached out to other rescue groups for help. Soon Scarlett (along with her friend Kaya) was on her way to Horse Haven at Best Friends. 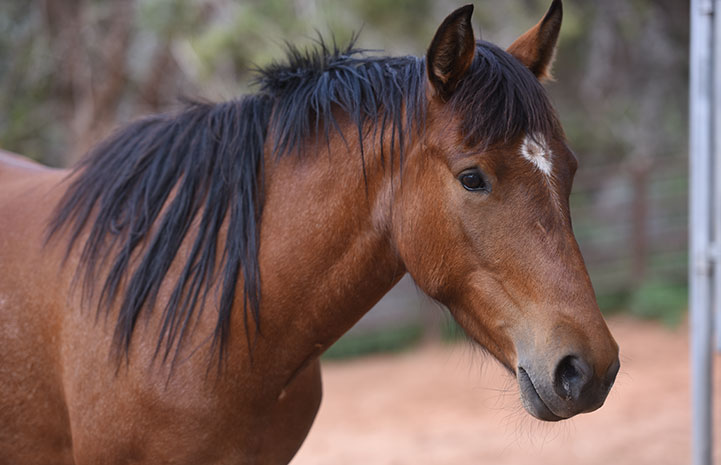 Though she hadn’t spent any time around people and had no idea how to live in their world, Scarlett wasn’t at all aggressive. In fact, she showed great potential from the get-go. She was friendly, extroverted and interested in humans.

“Scarlett was friendly by nature but wild by circumstance,” says Ann Hepworth, a trainer at Horse Haven. When she arrived, Ann started handling her using Parelli Natural Horsemanship techniques, which help Horse Haven staff rehabilitate horses from all walks of life.

Scarlett had a number of fears to overcome during her first year of living with people. She was not only afraid of her caregivers at first, but she was also afraid of anything that moved, as well as new environments and having anything placed on or over her back. When she was afraid, her instinct was to bolt and run away from whoever or whatever seemed frightening to her at the moment.

But Horse Haven trainers could look beyond Scarlet’s scared behavior and see the curious, playful and friendly horse she really was. All she needed was some patience and consistency.

Because the Parelli method is based on natural horse behavior, this horse training method helped Scarlett learn to interact with people in a safe and comfortable way. And true to her open, inquisitive nature, Scarlett came around quickly.

The real turning point, Ann says, was when she stopped running away. Instead, Scarlett learned to look at people for help and guidance whenever she became afraid. That simple behavior change was huge. It meant that Scarlett was making a choice to stay present both physically and mentally rather than taking off and checking out when she felt overwhelmed.

Whenever she was in doubt, the better and more rewarding choice was always to connect with the person. In those moments of doubt, Scarlett started to look at her trainers with a bright expression on her face that meant she was asking a question: “Hey, what’s happening?” or “Is this OK?” The change fast-tracked Scarlett’s relationships with people and her ability to learn from them. “She has taken off exponentially since then,” Ann says. 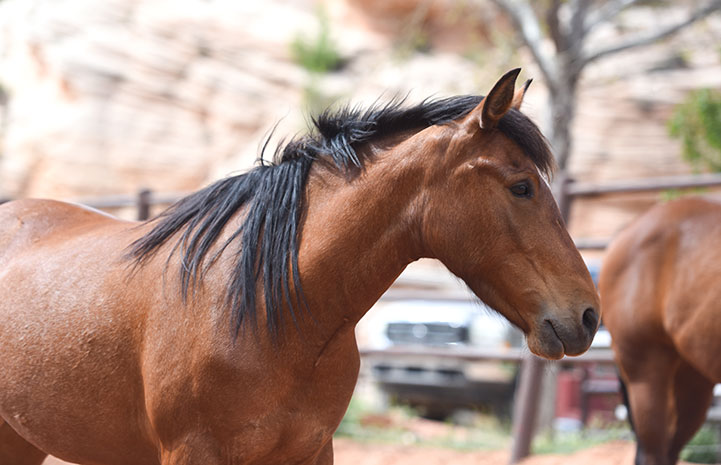 These days, the sassy mustang can climb in and out of a trailer and have her hooves trimmed. When she hears her trainers and caregivers drive up to her pasture gate, she rushes over to meet them. She also loves greeting volunteers. “She is not a wild horse anymore,” Ann says.

And Scarlett hasn’t lost any of her character. She’s as cheeky and funny as ever. She’s smart, too, which is good since she still has lots of things to learn. She’s still working on exploring new places and realizing she’s safe even when she’s out of her comfort zone. Scarlett’s even learned to carry a saddle and to follow other horses on trail rides. Soon, she’ll take her partnership with people to the next level by having a trainer ride her.

In just under a year, Scarlett has transformed from wild and frightened, into a horse who feels comfortable and safe living with people. Best of all, she’s blossoming into a truly confident and happy horse.

Scarlett may not be roaming free any longer, but, as she heads into her next adventures, she seems truly glad to have people close by to guide her.

Help more animals like Scarlett get the royal treatment they deserve