How to teach a dog to be calm

It might seem strange for a stocky, rambunctious dog like Moose to look so happy and at home on an agility course. After all, leaping over bars, running up and down an A-frame and balancing on a teeter-totter all take a certain amount of speed and finesse that, at first glance, Moose doesn’t seem to possess.

A successful run, though, on Dogtown’s agility course takes another set of important skills: good manners, patience and self-control. These skills are what Moose has worked for months to learn, and they have been difficult for him to master. But learning them has changed his life, giving him his first moments of calm, and a better shot at a home of his own someday.

Rescued after Superstorm Sandy in 2012, Moose came to the Sanctuary several years later because he wasn’t getting adopted, despite all efforts on his behalf. He had no idea how to interact with people, choosing to leap up and use his mouth to play. But his jumping on people felt more like rough pushing, and his playful mouthing felt more like biting. For a dog as big and powerful as Moose, it was especially important to address his greeting and play styles before he accidentally hurt someone. And his behavior kept scaring away everyone he met. Fortunately, Dogtown trainers and caregivers know exactly how to teach a dog to be calm, and they got started right away with Moose.

After many training sessions in his room, in his yard and on walks, Moose mastered the responses to basic training cues such as “sit,” “down,” “take it,” “drop it,” “wait” and “go to your place.” But Dogtown trainers and caregivers have another tool in their toolkit for training excitable dogs: impulse control games for dogs, including agility. Teaching Moose how to navigate the tunnels, bar jumps, hoops and tables in Tara’s Run, Dogtown’s large indoor training and agility area, became the key to helping an out of control dog to settle down. 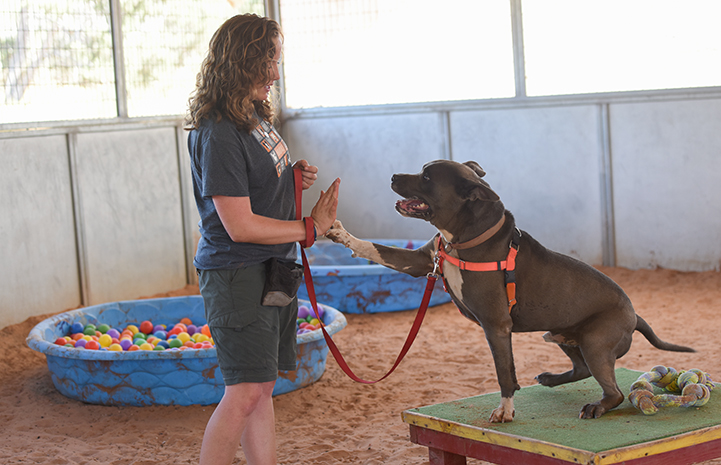 All the physical activity of running up and down A-frames and through tunnels tired Moose out both physically and mentally, making him calmer in general and a lot less eager to jump up on people. After his agility sessions, he was able to relax enough to enjoy some downtime with people for perhaps the first time in his life. During those quiet times, Moose was able to sit calmly, without getting overexcited, with his caregivers as they petted him. That was something he hadn’t been able to do before.

“You couldn't pet him when he first arrived (at the Sanctuary),” says Dogtown caregiver Rebecca Woodruff, “but at the end of an agility session, you can pet him all over.”

For Moose, agility was the winning ticket, and for a while things were going great. Moose seemed to have his behavioral challenges beat. But then, a physical challenge caused a major setback. Moose needed surgery to remove a small tumor from the inside of his back leg. While the surgery was a success, Moose had to take it easy during the healing process, which meant no agility training until Best Friends vets cleared him for vigorous exercise.

That might have been fine, except that Moose’s leg took longer than expected to heal. He could still practice some of his basic cues, but the time off from agility left him frustrated, and the jumpy and mouthy behavior he’d shown in the past resurfaced. 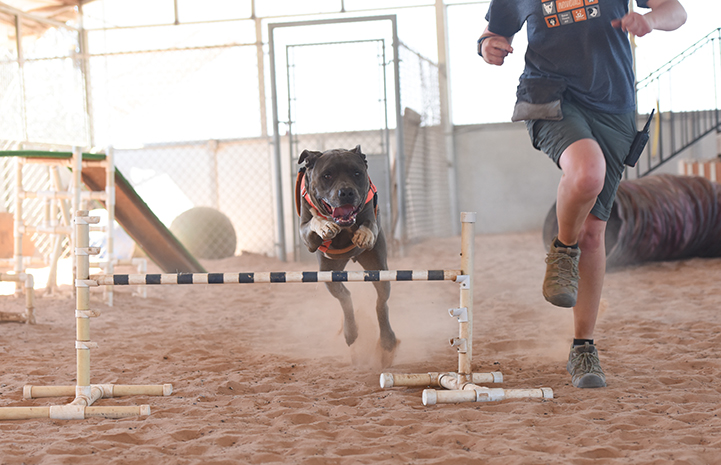 Excitable dog gets back on course

Not for long, though, because there were other ways to channel Moose’s energy while he waited to get back on the agility course. Hydrotherapy, which helped to heal and re-strengthen Moose’s leg, was one of them. “He loves hydrotherapy now and he knows it’s his calm place,” says Dogtown caregiver Terran Tull.

“Parallel” walks, in which a second dog walks parallel to the first dog (Moose), but at a comfortable enough distance so that the dogs can’t interact, were also helpful. Along with some light exercise, the walks gave him the chance to improve his dog skills while on a leash. Moose has also been learning some fun new training cues, such as “back up” and “wave.” 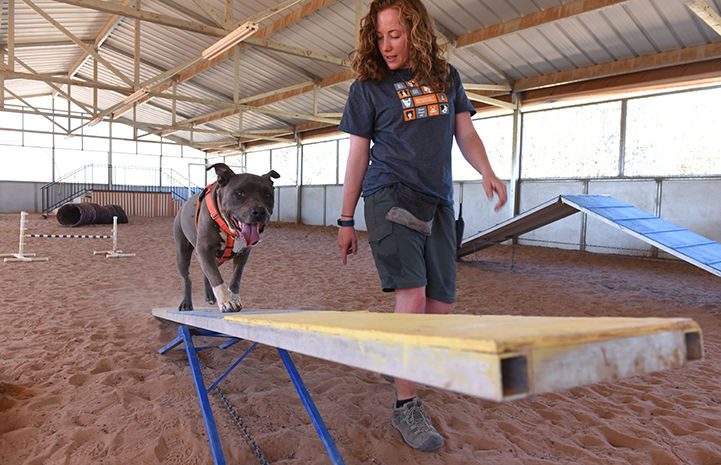 But nothing makes Moose happier, or has a longer-lasting and more calming effect, than a session on the agility course. And now that Moose is physically healthy again, he’s returning to his happy place in Tara’s Run. Though he’d been away for months and was out of practice, Moose immediately remembered the obstacles and was ready to tackle them anew.

And while he’s flexing his muscles, relieving stress and having fun, he’s reawakening and reinforcing all the self-control he’s worked so hard to obtain. While Moose may not look like a doggie gymnast, he’s a winner nonetheless. 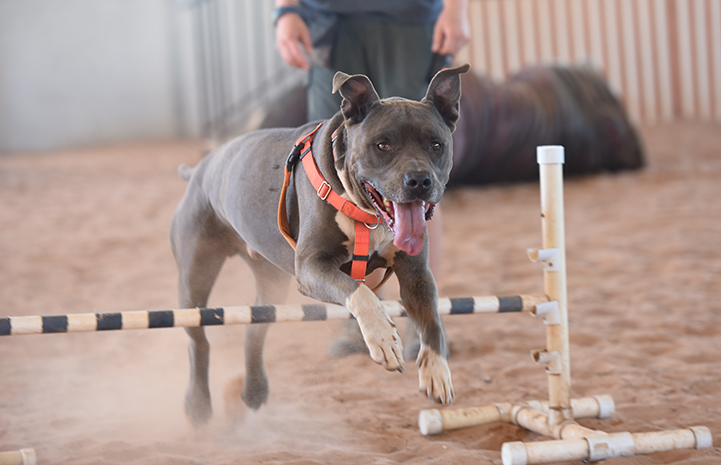