Image
Caregivers and behavior consultants help one rambunctious, excitable dog calm down and learn impulse control by establishing a routine for him.
By Christelle L. Del Prete

Like people, dogs don’t get a second chance to make a first impression. And since most first impressions of Jango aren’t so rosy, that’s been one of his biggest challenges. Because the three-year-old dog is big, muscular and blocky-headed, he looks intimidating to some people. Add to that his tendency to be an excitable dog, and you might be tempted to say goodbye to Jango even before you’ve had a chance to say hello.

At Best Friends, no one judges Jango (or any other dog) by his looks. And despite some rambunctious dog behavior, he’s not an out of control dog. Dogtown caregiver Tom Williams says, “Jango’s a really loving dog who can have affectionate and meaningful relationships with people.”

It’s just that he needs a little help keeping calm and giving people the chance to see his sweet and loving side. At Dogtown, Jango is getting that help, and it’s making his relationships with people a lot more successful and his life much more peaceful. 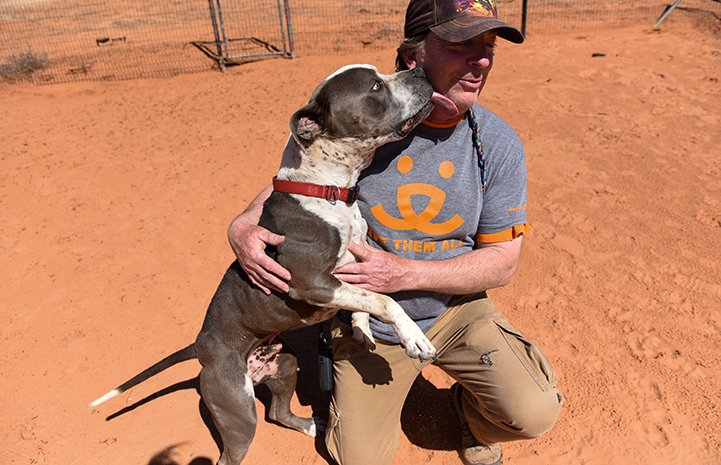 When Jango was brought to the Sanctuary from a local animal control agency, he had a reputation as an unruly dog. He’d gotten himself into trouble by chasing chickens in his neighborhood, and it soon became clear that he didn’t know how to interact with people, either. Not only was Jango 75 pounds of solid, muscular exuberance (enough to knock most people down), but he seemed to think it was OK to jump up on people and mouth them.

The high-energy dog didn’t know how to contain himself, but Dogtown caregivers and behavior consultants know how to settle a dog down and have plenty of experience training excitable dogs like Jango. So, while he still has work to do before he’s ready for adoption, he’s learning the manners, patience and impulse control that will help him make better first impressions and, eventually, find the perfect home.

For Jango, the key is filtering out the hustle and bustle of life and weaving some moments of calm and tranquility into his day. Unlike more easygoing dogs who go with the flow when things are a little loosey-goosey, a free-spirited atmosphere full of spontaneity stresses Jango out. And because Jango thrives on predictability, his days are mapped out into a structured routine, which relieves stress and helps him behave more calmly.

How to teach a dog to be calm: the morning routine

Though there are slight variations in some of his activities (regular grooming, vet checkups, etc.), Jango’s schedule is almost exactly the same every day. First thing in the morning, caregivers greet all the dogs in his building and perform a health check to make sure they are feeling their best. Jango’s health check goes smoothly because he’s mastered the training cue “go to your place.”

How to train a dog to “go to your place”

Having Jango go to a designated place in his room (usually his bed) before a person enters keeps him from excitedly jumping on people and also reinforces the idea that Jango's “place" is a safe spot for him. And it’s rewarding, too, because that’s where he gets great things ― like meals and treats, plus love and affection from caregivers. A reward for going to his place makes him feel good about going there, and it also makes it safer for those who enter the room to check him for ticks, bumps, scrapes or rashes under his fur and in his ears.

Learn the signs of a healthy dog 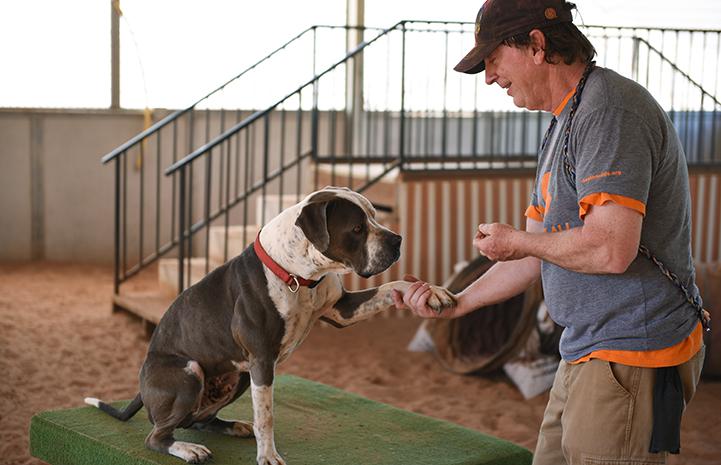 Once he passes the test and caregivers finish checking the other dogs, it’s time for breakfast. When Jango’s meal is ready, a caregiver brings the bowl to his gate and gives a verbal cue or hand signal for Jango to go to his place. Thus, breakfast becomes a reward for good behavior.

After breakfast, Jango takes a rest, because the old adage about not exercising right after you eat holds true for dogs, too. This quiet time gives him a chance to digest his food so he won’t get an upset stomach.

Fun time for a high-energy dog

After that short rest, it’s time for some fun. There are plenty of entertaining activities to help keep Jango’s mind sharp and his body fit, and Jango is usually up for one or more them. When the weather is nice, he can go for a walk on one of Dogtown’s many trails. He can also enjoy some playtime at Tara’s Run (Dogtown’s indoor training and agility area, where he likes to run up and down the agility A-frame). Sometimes, Jango’s caregivers will take him for a ride. He loves cruising in the back seat of a car with the windows partly open so he can sniff the clean, fresh air. 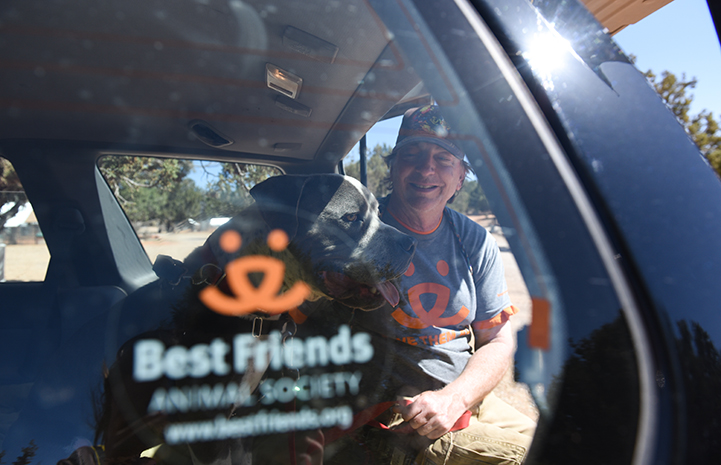 Since training is also great enrichment for dogs, Jango sometimes practices meeting people appropriately through new introductions to Best Friends staff members. They give him a treat if he sits or lies down rather than jumping up, which helps to teach him that greeting people in a nice way is fun and rewarding. But Jango’s favorite thing is going to the dog park. While he loves following a caregiver around the park and smelling all the scents, the one thing he likes most is to go in the pool.

“He will wade in on his own and start picking up little twigs or small branches in his mouth and take them out, which is his way of helping us clean the pool,” Tom says. “He will also belly flop right in after a toy or a big jolly ball, and then work to push that toy back out of the pool. It’s so funny. We throw toys into the pool. He pushes them out. We throw them back in. He pushes them back out.”

How to settle a dog down in the afternoon

Next on the schedule is some time to practice calm, relaxed behavior. Tom says he often goes into Jango’s room and sits quietly with him. “It’s really good for excitable dogs like him. “He will lay his head on my lap.”

By then, it’s time for dinner. The afternoon feeding ritual is much like the morning: Jango sits or goes to his place so that a caregiver can enter his room with his meal. The repetition reinforces the idea that he’s earning his meal by showing polite behavior. 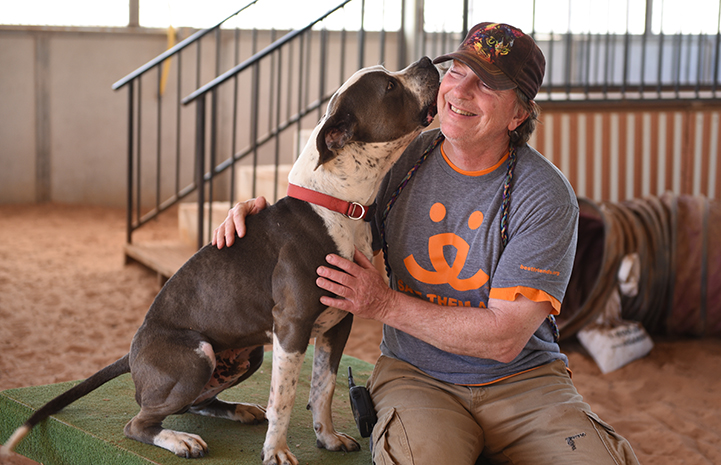 After dinner there’s more quiet time to rest peacefully and comfortably on his bed with some soft blankets. “He learns that as the day is coming to a close, he can rest and nap and feel good about being in Dogtown,” Tom says.

Finally, Jango gets more end-of-the-day love and attention and a “medicine meatball” (a daily supplement wrapped in treats).

A perfect mixture for an excitable dog

While Jango’s structured schedule wouldn’t work for every dog, for him it’s the perfect mixture of training, enrichment, attention and relaxation. It helps him know what to expect and when to expect it. Predictably, that not only makes Jango calmer, but also makes him happier.

Every day that Jango walks this path ― learning to control his energy by practicing calmness ― he comes one step closer to being ready for a home. Someday, he’ll reach his ultimate goal ― finding a potential adopter who meets Jango, says hello and decides to never say goodbye. 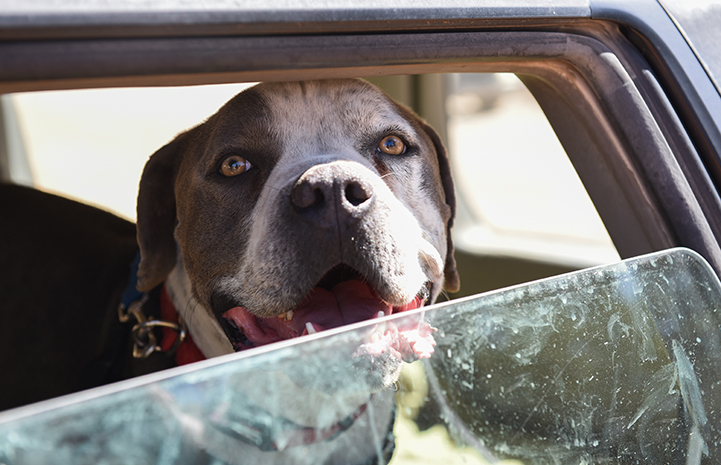