Image
Three-legged pit bull terrier dog provides emotional support and companionship to young girl who had her leg amputated due to a disease.
By Christelle L. Del Prete

The Petrucka family already had two dogs, but Lydia, who was 10 at the time, kept begging for another one. It couldn’t be just any dog, though. Lydia craved the deep connection that only two survivors could share. She found that connection in a dog named Clover that her family adopted from Best Friends Animal Society.

Lydia was born with a disease in her foot, and although doctors tried for years to cure it, amputation eventually became the best option. The young girl showed amazing resilience as she recovered and readjusted to life, but she felt lonely. None of the other kids her age in the neighborhood had experienced what she had experienced. No one could really understand what she had gone through.

“I felt like I was the only person in the world who was going through this,” says Lydia. But that would soon change.

The search for a three-legged companion

What she didn’t know was that her parents had already put out a call to local shelters and rescue organizations. Did anyone have a gentle dog who had undergone an amputation who might be a good companion for their daughter?

Best Friends answered that call. Yes, there was a dog at the Sanctuary who matched that description and who might be a perfect friend for the young girl.

Clover, a pit bull terrier mix with a sweet temperament, was about two years old at the time. She had come to the Sanctuary from a small rural shelter after suffering extensive injuries, most likely from being hit by a car. One of her front legs was so badly damaged that it was removed at the Best Friends Animal Clinic. 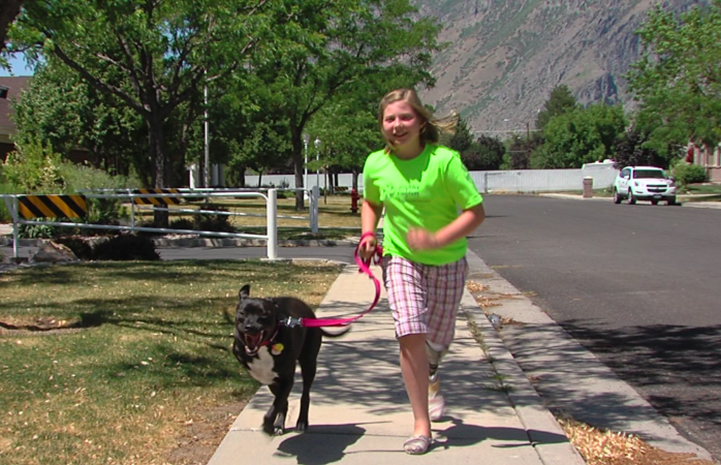 Both Lydia and Clover were recovering and adjusting to life with one less leg. It seemed like the two might be a match made in heaven, and as it turned out, they were. Since the day Lydia’s parents brought Clover home as a surprise, she and her dog have been the very best of friends. Clover now has a very important job: He is Lydia’s constant companion and emotional support dog. When the world feels overwhelming, Clover is there for Lydia.

Lydia, who turned 12 a few weeks ago, still has her struggles. She has days when she feels upset, and she still searches for opportunities to make meaningful connections with kids who’ve shared similar experiences. For example, she traveled to an Amputee Coalition youth camp two summers in a row, even though she could not bring Clover with her.

“Out of the whole family, I think she missed Clover the most while she was away at camp,” says Lydia’s mother, Liesl.

“Clover has done a lot for me,” says Lydia, who goes on to explain that she was having trouble sleeping when the dog first came to live with the Petruckas. But with Clover snuggling up beside her, she was able to relax and sleep more comfortably and soundly. 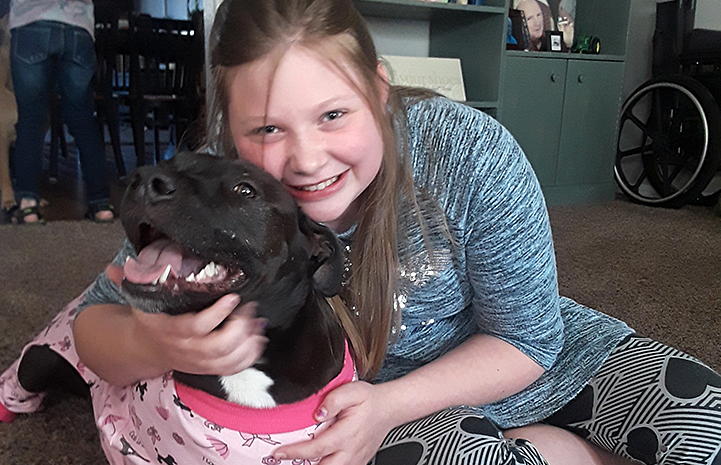 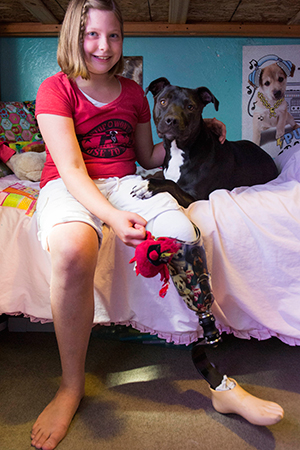 “She makes me really happy,” Lydia says. “She will make me laugh by licking me even when I’m sobbing. She is the nicest dog, and she has this ability to make everyone smile around her.”

Liesl agrees: “Out of our three dogs, she has the most emotional support ability.”

As a former shelter dog, Clover also seems thankful to have a home. “I try as hard as I can to promote pet adoption because of her,” Liesl says. “A lot of people are reluctant to get shelter dogs, but she’s so willing, obedient and loving. She’s a great example of what a shelter dog can be.”

As Lydia’s most loyal and understanding companion, she’s also a shining example of a beautiful connection between dogs and people, and the caring and comfort they can give to each other.

Help more pets find love. Donate to Save Them All.