If a senior cat with FIV, chronic kidney disease and inappropriate urination can get adopted, anyone can.

Image
Senior cat with FIV and kidney disease, which requires he be given subcutaneous fluids, and who sometimes pees outside his litter box finds a home.
By Christelle L. Del Prete

Like the late Frank Sinatra, Knox could be called Ol’ Blue Eyes. But dashing looks aside, he waited a long time for a home because he wasn’t the most eligible bachelor in Cat World. 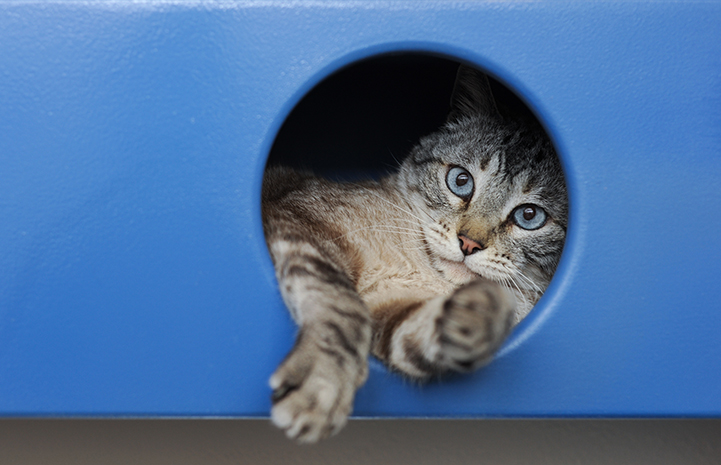 Now 15 years old, Knox has feline immunodeficiency virus (FIV), which makes him more susceptible to dental disease and other infections. And like many senior cats, he also has chronic kidney disease. To feel his best, he must on a regular basis be given subcutaneous fluids under his skin. If health issues weren’t enough to give pause to a would-be adopter, Knox sometimes urinates outside of the litter box, and that often stops would-be adopters in their tracks — but not Meghan von Linden.

Falling in love with a senior cat on a sleepover

While volunteering at Cat World, Meghan and her mother, Michele, took several cats on sleepovers. On their last night at the Best Friends cottages, they requested their favorite sleepover guest, a little black cat named Nenet. But she recently had undergone a minor medical procedure and wasn’t able to go on sleepovers. So instead, Meghan and Michele asked about cats who hadn't been out in a while or who would especially enjoy some time away. That’s how they met Knox. 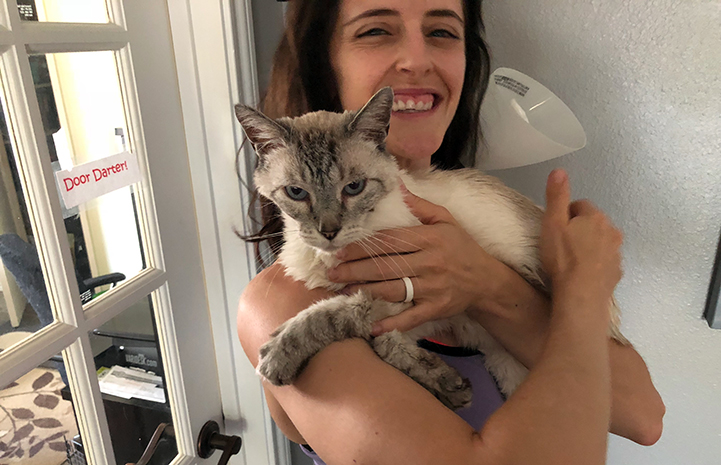 You wouldn’t think a senior cat with a long history of urinating outside of the litter box would make a good overnight guest. And you’d be right, except that, as Cat World team lead Katie Kyzivat explained: “Since there was always the risk that he might spray on sleepovers, we only allowed him to do sleepovers in a cabin or cottage on Best Friends property. We didn't want to take the chance anywhere else. But since we figured out the litter box trick, we'd send that along with him as well.”

One of Knox’s caregivers discovered the litter box trick, and while it won’t work for every older cat peeing outside the litter box, it works like magic for Knox. One day while Knox was out of his room exploring the Cat World headquarters lobby, a caregiver was changing out the litter boxes and propped a clean, empty litter box up against the wall vertically. When Knox came over to investigate, he sprayed the empty box but nothing else in the lobby. From that point on, anytime his caregivers let him out, they would prop clean litter boxes up in different areas of the lobby, and, without fail, he'd spray those and nothing else.

As it turned out, Knox was the perfect gentleman on his sleepover with Meghan and Michelle. There was no peeing outside the litter box, but there was lots of cuddling. By the next morning both mother and daughter had fallen for him and wanted to adopt him. They decided, however, that he’d be more comfortable at Meghan’s home, since it’s very quiet. Also, because Meghan works from home, Knox would always have company. 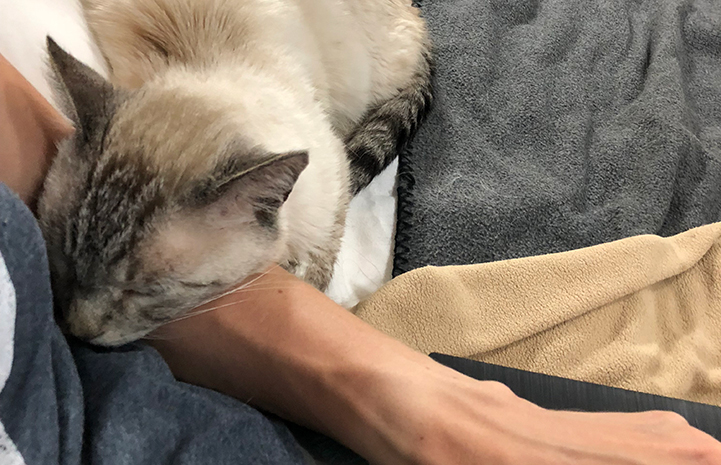 Homework before adopting a cat with special needs

Because Meghan already had two other cats with special needs, she had some homework to do before she could adopt Knox. She watched videos on how to administer subcutaneous fluids, to see if she was up to the task. And she sought information and advice from Knox’s caregivers to make sure that she wouldn’t be risking the health of any cat by adding Knox to the mix.

As for Knox having FIV, studies show that it is safe for an FIV cat to live with another cat not infected with the virus, as long as there isn’t any serious fighting between them. (The infection is most commonly spread through a deep bite wound from an FIV-positive cat to an FIV-negative cat.) 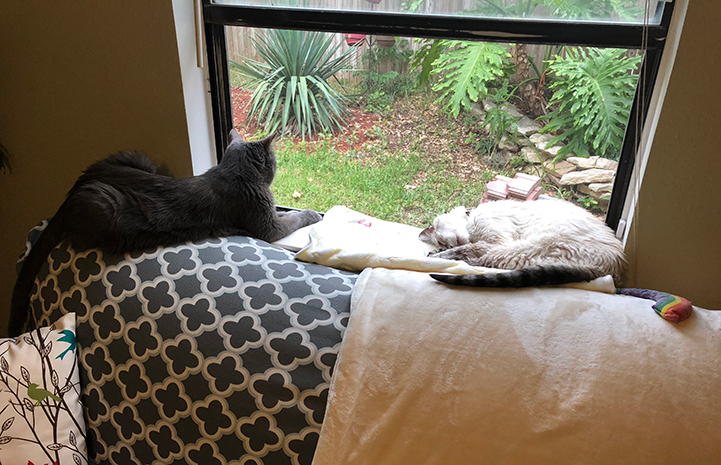 Meghan felt a little overwhelmed after her research. “I'll be honest in saying I was scared I couldn't handle all his meds, his behavioral issues, his fluids and keep all the kitties safe as he integrated into my household,” she says. “But more than all of that, I was afraid I would let him down. There's a quote out there about the right thing never being the easy thing, and I think that's true. There was only ever one right choice, so I focused on that and on how lucky I am that I could even consider taking on this little old kid with all his quirks and needs.”

Favorite moments with a senior cat

Knox is settling into his new home. Although he has free roam of the house all day and night when Meghan is home and can supervise him, he also can retreat to his own room whenever he needs peace and quiet or a break from his new kitty siblings. 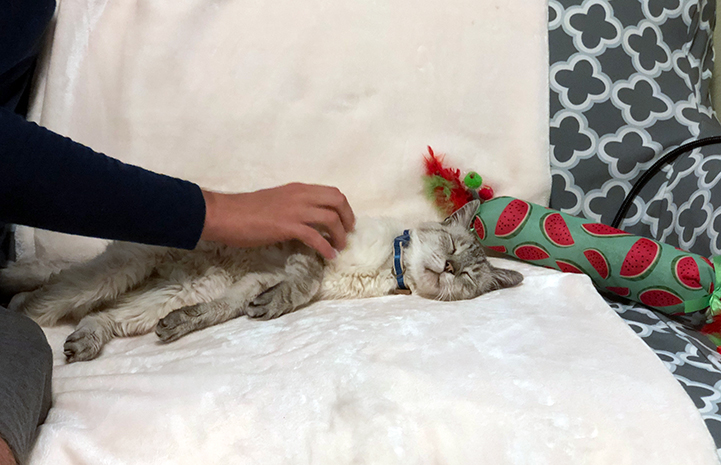 He spends part of each day snoozing near Meghan while she works and, though Knox wasn’t a big fan of being held in the past, that’s changed. “The longer he's been here and I've had to pick him up to bring him to different parts of the house or back to his room, the more comfortable he's gotten in my arms,” says Meghan. “There are times now where my husband or I can hold him for a solid three or four minutes cooing at him, and he's like a wet cat noodle in our arms, just purring away. Those are my absolute favorite moments.” 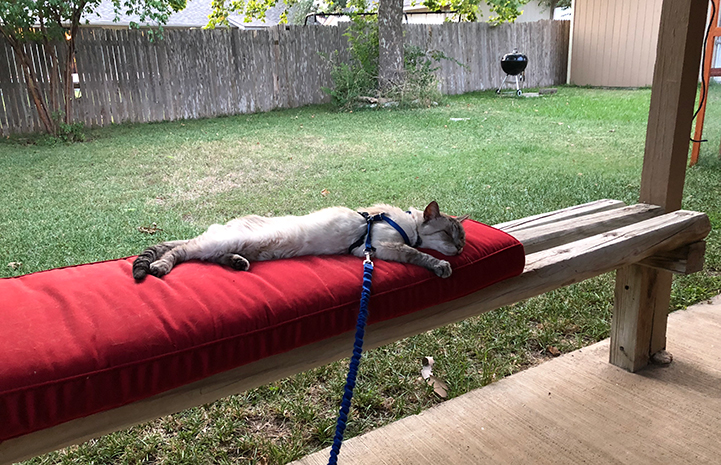 It’s likely Ol’ Blue Eyes has lots of favorite moments now that that he’s finally found his forever home with someone who loves him exactly the way he is. 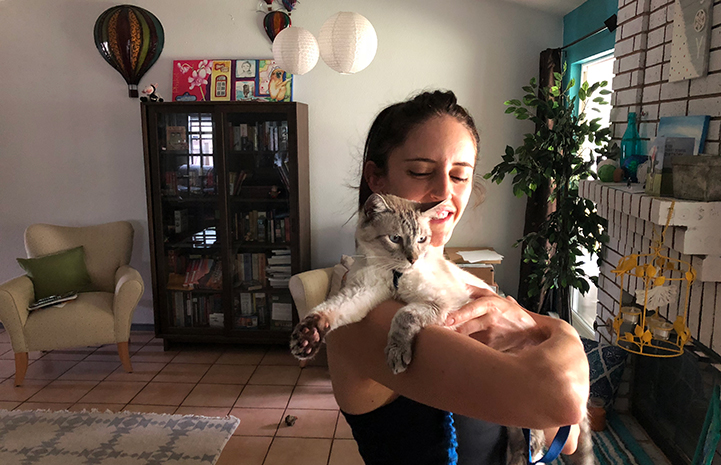 Photos by by Molly Wald and courtesy of Meghan von Linden