Inspired by one cat with kidney disease to adopt another

Image
Cat with kidney disease was living outside as a stray, but now he has been adopted and is receiving treatment, medication and a prescription diet.
By Nicole Hamilton

When the community cat team from the Best Friends Pet Adoption Center in Salt Lake City first met a cat named Leroy Jenkins during a trap-neuter-return event, he was living outdoors on his own. And by the looks of him, he needed help. The senior cat was severely dehydrated, his hair was matted, and his belly wasn’t tolerating food well.

But even though Leroy didn’t feel good, his sweet and relaxed personality eclipsed his physical woes and impressed members of the Best Friends team. They knew they couldn’t leave Leroy outside in the shape he was in and because he was so friendly, it appeared that he would do well in a home once he felt better.

“He’s the kind of cat that would never have anything bad to say about anyone,” says adoption specialist Jaime Schnell, one of the first people at the center to meet Leroy. “He’s just a gentle soul.” 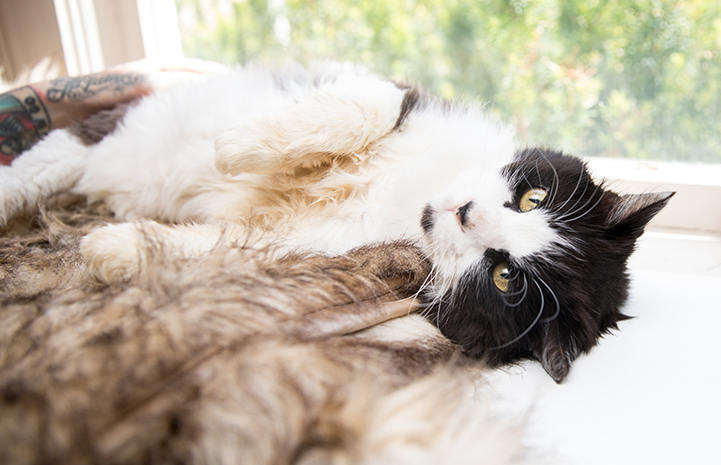 Needed: An understanding adopter for a cat with kidney problems

A medical test on Leroy shortly before he was brought to the center showed that he had had kidney disease. He’d need three things: daily medication, a special diet and an adopter who would see his medical issues as a reason to love him even more.

The center staff got him started on his new medication and diet. And in Michelle Lunn-Adams, he’d soon get his new forever home. 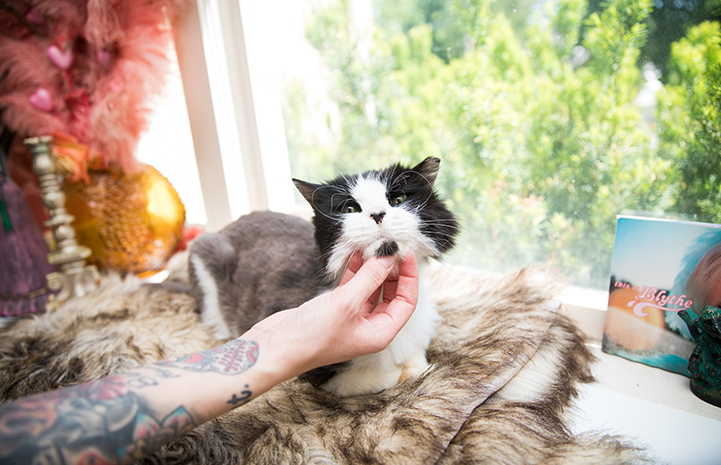 Inspired by one cat to adopt another

Michelle had been looking for a cat to adopt when she came across Leroy’s photo on the center’s website. “He had a super funny expression on his face,” says Michelle. He reminded her of the pirate cat from the film The Last Unicorn (her favorite as a child), which she took as a good sign.

The fact that Leroy was a senior cat in need of kidney disease treatment (including a prescription diet and medication) only made her more interested in meeting him. She knew older cats like Leroy who have chronic, ongoing medical issues have a harder time finding homes than younger, healthier cats. 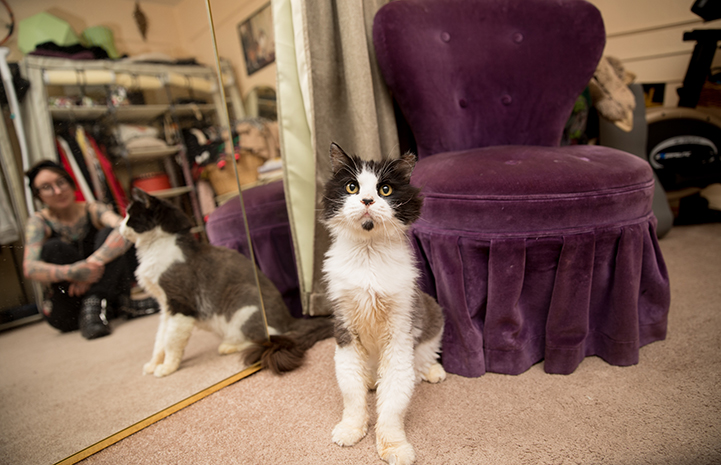 There also was another reason she wanted to meet Leroy. Her cat Bert had kidney disease and experienced renal failure before passing away. Michelle thought that adopting another cat with similar medical needs would be a way to honor him and save a life. 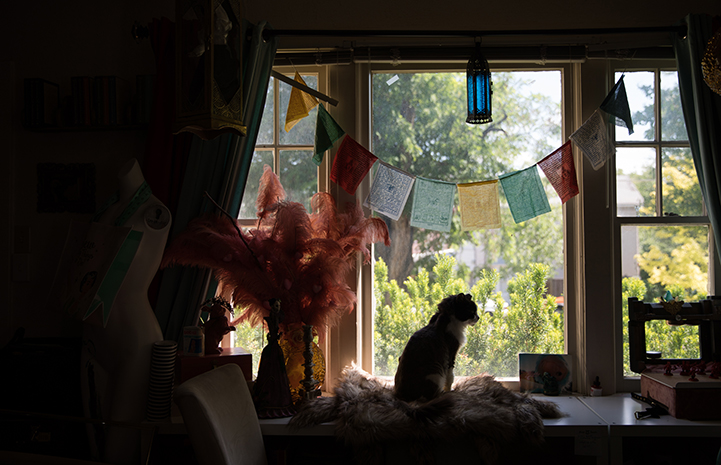 Putting lessons about kidney disease to use

When Michelle met Leroy at the center, he had that same look on his face that made her smile when she saw him online. Discussing the care that he needed with the staff helped her feel confident that she could give him a good home, thanks to the lessons she learned helping Bert.

That day, Leroy went from fending for himself on the streets to a life with a person who’d always have his back. 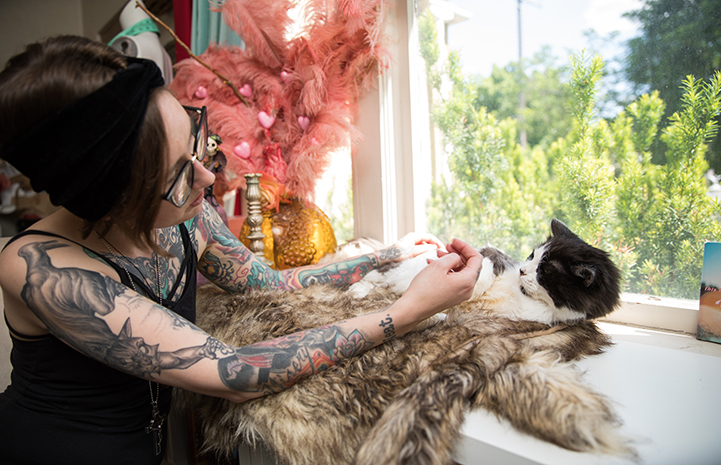 Like many adopters, Michelle admits that she’s prone to giving Leroy a little too much attention. “He probably thinks I’m a helicopter mom,” she says.

Of course, when you’ve got a cat with kidney disease, keeping a watchful eye is warranted. Michelle must make sure Leroy’s symptoms are monitored and that he is treated as soon as she thinks he needs medical attention. He can’t miss his daily medications and must stay on his prescription diet.

“It’s expensive,” says Michelle. “But of all the things I could spend my money on, I prefer to spend it on my cat.” 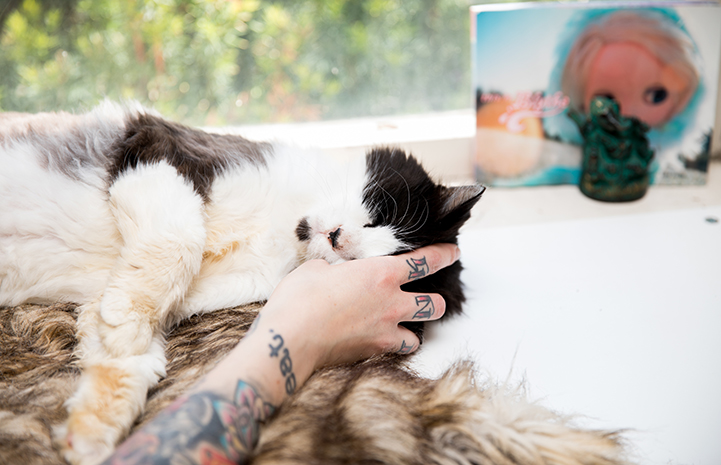 Michelle and Leroy now have a routine. “We’re on a schedule,” she says. “He follows me around when I’m home working. Then after he’s fed at night, he likes to be petted. And he loves looking in the mirror,” says Michelle. “I think he thinks he’s good-looking.”

When Michelle looks at Leroy, sometimes she wonders why more people don’t adopt older cats. “Leroy is just happy having a place to relax,” says Michelle. “There’s a lot of love in our home, because older cats have so much love to give.” 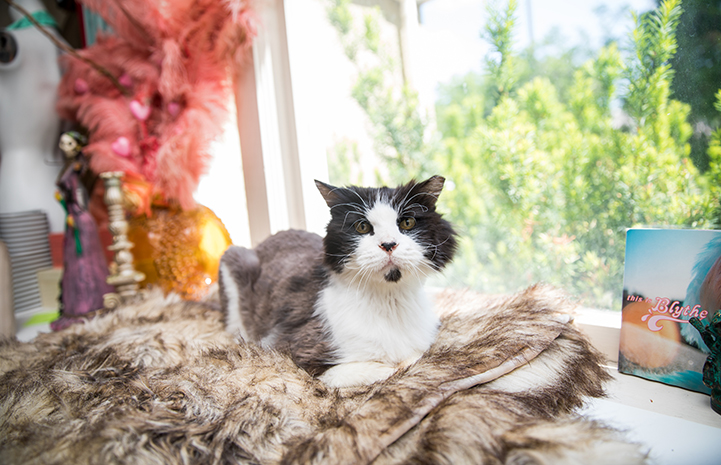