Image
An introverted and timid dog gets help from her more extroverted and rambunctious dog pal. The two canine balance and help one another.
By Christelle L. Del Prete

“Ronnie and Clyde” might sound more like a pair of infamous villains than a dynamic duo at Dogtown. But these doggie pals aren’t making mayhem. They have the kind of friendship that brings a little more happiness and harmony to the world.

The friendship works because the two dogs counterbalance each other, says Dogtown caregiver Paul Lindley. As he walks them out of their building, you can immediately see what he means. 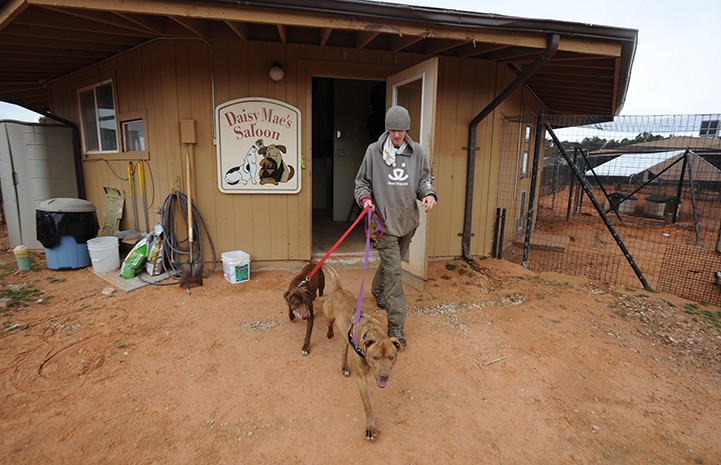 There’s a visitor nearby and Ronnie, tail tucked in uncertainty, instantly moves away. Clyde, on the other hand, is thrilled to see a new person. He’s so happy it takes a moment before he remembers to stop bouncing up and down with excitement at the end of his leash. Only when it’s reasonably certain that all four of Clyde’s feet will remain on the ground is he allowed to greet the stranger. And then he’s full of wiggles, kisses and gentle pleading for a treat.

Meanwhile, timid Ronnie hides behind Paul, watching the scene warily. At nine years old, she’s got about six years on her younger pal. But her presence helps Clyde tone it down a few notches. And he brings her energy up and helps her learn to interact with the world.

Clyde came to Best Friends from a shelter and was immediately ready to take on the world. Ronnie came from another rescue organization and was extremely shy and fearful. For a while, she lived in the kitchen of one of the buildings in Dogtown so that she could get used to people coming and going. But, because she was so afraid, Ronnie spent most of her early days at the Sanctuary hunkered down in a bed in the corner by herself.

She didn't want to go out for walks. She was reluctant to eat, and was so distrustful that she wouldn't touch her food unless her caregivers left the room. Hand-feeding her (one of the ways in which caregivers overcome shyness in dogs and build trust with them) was out of the question.

After a few months, Ronnie did become attached to a couple of her caregivers. But as for anyone and everything else, she wasn’t having any of it. Her caregivers sometimes had to carry her out of the building to get her outside. 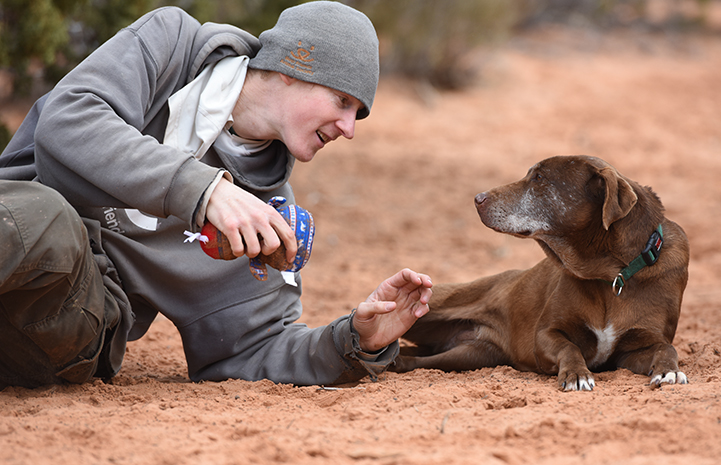 In Dogtown, when undersocialized or shy dogs have a hard time connecting with people or adjusting to life at the Sanctuary, caregivers often enlist the help of more confident, outgoing dogs. Matching a skittish, introverted dog with a more outgoing, extroverted dog can help the bashful or fearful dog feel more comfortable around people and develop skills needed for success in the world beyond the Sanctuary. “Dogs speak the same language,” says Dogtown manager Chris Vergallito, confirming that they can learn a great deal from each other.

Ronnie started having play dates and going on walks with other dogs. And her caregivers started searching for the perfect doggie roommate for her — one who could make her feel more comfortable in the world and help boost her confidence.

It had to be a tolerant dog who wouldn’t mind that Ronnie tends to get a little possessive of her things — and of the people she comes to rely on. When she first came to the Sanctuary, she didn’t want any other dogs to even come near her. But Dogtown staff knew that if they could find Ronnie the right canine companion, it would help her immensely. 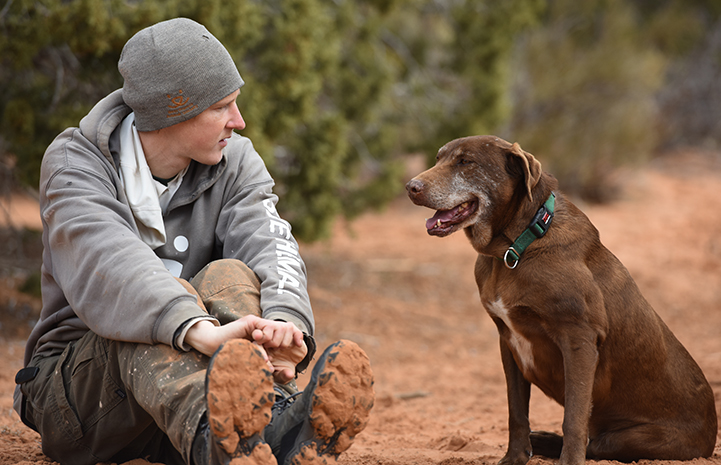 That’s when Clyde entered her life. The exuberant pit bull terrier mix doesn’t have a shy bone in his body. He's big and bouncy and likes to greet people with a friendly “woo-woo” when they go into his room.

At first Ronnie wasn’t so sure about him. He’s as energetic and playful as she is hesitant and reserved. But something about Clyde put Ronnie at ease, and their friendship blossomed over time. Ronnie now seeks her pal Clyde out for companionship, and she’ll even lie next to him on the same bed. They’ve become fast friends, and Ronnie finally feels comfortable enough to share her space with another dog.

Because of Clyde, she’s feeling a lot more comfortable with people these days, too. She’ll let people come right up and pet her. And while she used to refuse to eat unless her caregivers left the room, she’ll now lick peanut butter off their fingers because she sees Clyde doing it. She’ll also go for walks with caregivers or volunteers on the trails through Dogtown, so long as Clyde is there.

​These days, Ronnie loves to be with the people she knows. She’ll follow them around in the dog park and will even walk up and nuzzle them for attention if Clyde is getting loved on. If Clyde is going somewhere, Ronnie refuses to be left behind. It doesn’t matter if she’s nervous about car rides, for example. If Clyde is going, she’ll follow along.

“Her progress continues to amaze us, says Dogtown caregiver Tom Williams. “It’s the perfect example of how an extroverted dog can help a really introverted one”.

As Ronnie gains confidence, she’ll also gain independence. Once she learns the ropes, she won’t always have to rely on Clyde to decide how to behave in different situations. She’ll be strong enough to do things on her own ― including going to a new home.

She’ll have her friend Clyde to thank for showing her the way. And “Ronnie and Clyde” will go down as one of the most successful doggie friendships in history. 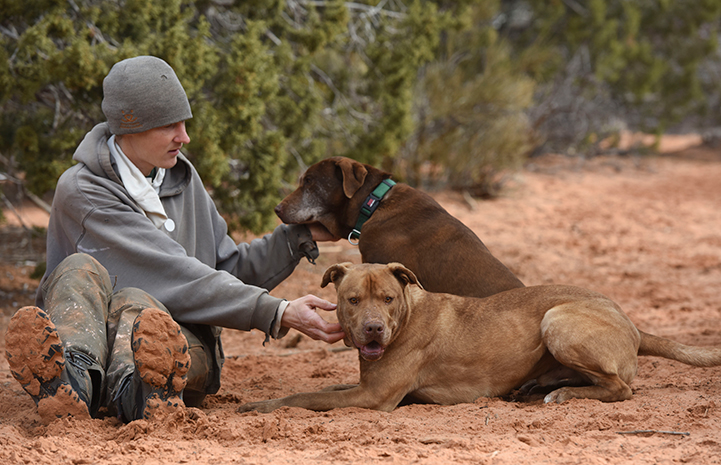