After a few pigs recently left the Sanctuary to go to their forever homes, Best Friends had some open space in the newly renovated Marshall's Piggy Paradise. The Ironwood Pig Sanctuary, however, was operating at full capacity, with approximately 600 abandoned, abused or neglected potbellied pigs. Founded in 2001 by husband-and-wife team Ben Watkins and Mary Schanz, Ironwood is nestled in a rural area about an hour north of Tucson, Arizona.

Adria Johnson, a Best Friends caregiver, who has visited the Ironwood facility, says that they are a great sanctuary. However, like many rescue organizations, they are dealing with a very high intake demand. So Best Friends agreed to take five of their pigs - four boys and one girl - ranging in age from a year-and-a-half to two-and-a half years old. The hope was that the pigs would get adopted more quickly at the Sanctuary, but no one knew quite how popular they'd become. 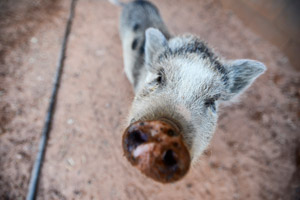 Poppy, the only girl, never even made it into the general population at Marshall's Piggy Paradise. She was spayed the day after she arrived at the Sanctuary and then placed into a foster-to-adopt home with a family who previously adopted three Best Friends pigs. And, Malcolm, an adorable black pig with a white stripe on his nose, was also spoken for almost immediately. Though he's a little shy, he's a sweetheart of a pig who loves to go on walks with his new family.

Residing now at Marshall's Piggy Paradise are Rupert, Maxwell and Tobias. Of the three, Rupert, an irresistibly cute pink pig, is the shyest. Though he's still learning that people aren't frightening, he wants badly to be around both humans and other pigs, and is getting bolder every day. Though he'll sometimes run up to new people only to turn and run away, it's clear that he wants attention and will learn how to ask for it someday. Soon, he may even be able to go for walks like most of his piggy buddies do.

Like Rupert, Maxwell is a bit shy, but he is comfortable enough to enjoy walks. He loves to be brushed, and will roll onto his side for belly rubs with a big smile on his face. Tobias is sort of the odd man out; he spends quite a bit of time trying to show Nick (a much larger pig who lives on the other side of the fence) that he isn't intimidated by him. But Tobias loves attention just as much as the others. 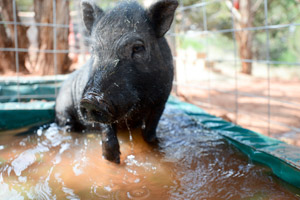 Along with the other residents of Piggy Paradise, Rupert, Maxwell and Tobias are all enjoying an upgraded and expanded living space. What's more, they are now living communally with about five other pigs - a situation that more closely mimics the "sounders" (communities) that pigs form in nature. So far, everybody is adjusting well and getting along just fine.

In fact, caregiver Susan Kesling says she is amazed at how smart Rupert, Maxwell and Tobias seem to be and how quickly they are figuring out the pecking order in their community. And, she notes that they have not only charmed the staff at Marshall's Piggy Paradise, but also the volunteers with their wonderful, cute personalities.

Learn more about the adoptable pigs at the Sanctuary.