With Camp Charlie’s acres upon acres of grassy pastures, it was the perfect setting for a doggie adopt-a-thon. The dogs in question ran around leash-less over the fields and down to a nearby stream, where they jumped around with glee. And, thought Lydia Hartsock, they looked just like a bunch of excited schoolchildren.

Lydia and her daughter were just arriving at the "doggie day camp" to take part in All Dogs Day, a gathering of animal rescue organizations, shelters and groups from around the Seattle area who banded together to bring the public wonderful dogs needing homes.

Although the late-August morning gave hints that the day would be a scorcher, hosts Pawsitive Alliance, Camp Charlie, Three Dog Bakery and Best Friends Animal Society were ready for a successful event.

Lydia arrived at Camp Charlie with a dog to adopt out from the Summit Assistance Dogs released dogs program. Summit adopts most of its assistance dogs from shelters and rescues, but only a small number actually graduate from the intensive training required to assist people with disabilities. Those that don’t "make the cut" are adopted out to loving homes and, because of their training, usually have excellent manners.

While setting up the Summit information table, Lydia noticed a large great Dane mix across the field with his handler. Being a dog lover, she had to meet the big, beautiful dog to find out if he was adoptable. As the volunteer coordinator and fundraiser for Summit, Lydia wasn’t formally trained in what to look for in a shelter dog to enter the program, but there was something about this dog that she instinctively knew was special. She discovered that he came from King County Animal Control (KCAC).

"His name was Crunch and he was definitely up for adoption," said Lydia. "I asked if he was nice, was he aggressive. All of the handler’s answers confirmed that this was a wonderful dog."

Not wanting to waste any time, Lydia called Summit’s executive director, Sue Meinzinger, to tell her all about Crunch. Sue gave her instructions for a few more tests, which Crunch passed with flying colors, so Lydia adopted him on the spot.

KCAC was so excited that Crunch was going to an assistance program that they waived the adoption fee and offered to find him a home if the training didn’t work out.

"He was an angel all day at the event," said Lydia. "He played with the kids, adults, my daughter, and me all day. He totally ignored any pesky pet that wanted to take him on, and he just lay down anywhere he wanted. Big dogs can do that!"

"I still had not checked for toy or food aggression, so I gave him a Greenie bone to chew. Midway through it, I asked for it back and just reached my hand into his massive mouth – not even thinking what he COULD do to my hand! He simply let me have it and gave me that silly face that said, ‘Well, okay, if you need it more than me, you can have it.’ My daughter and I were totally smitten."

With Crunch’s entrance into the assistance dog program, he was given a new name: Marmaduke!

"I had a very beloved dachshund named Duke who passed away almost a year ago. It was out of respect for me as a dedicated volunteer and the fact that I was the one who found him that Sue suggested his name change," Lydia said. "I was so touched." 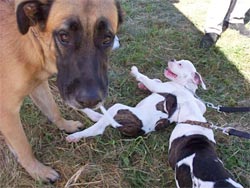 After showing his gentlemanly manners, Marmaduke went directly into Summit’s advance training program. He is only a week into his training but continues to impress all of the handlers. (Pictured: Marmaduke takes the 'puppy test.')

"We can never tell which dogs will be good enough to become a Summit Assistance Dog, and I'm really hoping Marmaduke can do it," said a proud Lydia. "There are so many people waiting to get assistance dogs and so many dogs waiting for a job and a wonderful forever home. With the selection of Duke, I'd like to think I helped reduce the number of people and dogs waiting. If Duke has it in him, he'll be matched with a forever partner who needs him in March 2006!"

With this success behind her, Lydia is planning to go through the formal training process to pick out shelter dogs for Summit.

Log on to Summit Assistance Dogs to learn more about the program and see photos of their graduates.