Image
Jack Russell terrier suffered abuse damaged to her left eye, but after surgery she is pain free and is now living a happy life.
By Christelle L. Del Prete

Maria may have only one eye, but she’s seen a lot in life. The adorable six-year-old Jack Russell terrier came to the Sanctuary after being separated from her person and suffering abuse from someone who’d been entrusted with her care. Poor Maria had irreparable damage to her left eye, and she was in a great deal of pain. Although the little dog has since lost her eye, she hasn’t lost her amazing spirit and zeal for life. 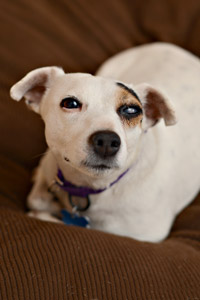 Soon after her arrival to the Sanctuary, Maria had eye surgery to make her pain-free and comfortable again. She had to adjust to a new place, and also had to wear the dreaded cone at first, to ensure the surgery site healed well. But Maria is a survivor, and though the transition could have been difficult, she must have known she was finally safe and loved. Whenever her caregivers entered her room, they called her name so she wouldn’t be startled. In no time, she learned to turn her head in the direction of their voices and footsteps so she could see people better. Her resilience and adaptability earned her an affectionate nickname; she quickly became everyone’s favorite little “One-eyed Jack.”

Now, only a month after surgery, Maria is a happy, exuberant dog living the good life at the Sanctuary. Because she loves people, and is sweet and affectionate, she’s already a volunteer favorite. When she’s not eagerly trotting alongside volunteers on one of the many sandy trails that wind around Dogtown, she’s curling up in a lap while someone reads her a book. Though she’s an energetic dog, it’s the perfect activity for times when she wants to take it easy and relax, while still basking in attention.

She’s a smart girl, too, and has really taken to clicker training. The clicker is used to mark desirable behaviors, such as when Maria sits nicely rather than jumping up to greet people on her springy little Jack Russell legs. She’ll repeat the good (sitting) behavior, because she knows she'll get a click and a tasty treat when she does. Maria loves treats, and her intelligence and food motivation make her an ideal trainee.

Now that she’s fully healed and can have doggie friends, she loves romps in the grass at the dog park with her two new Chihuahua buddies. Maria is the perfect reminder that life can be wonderful after a painful past, and that, with love and proper care, it is possible to thrive again.

Additional note: Maria will continue thriving in her new home. She’s been adopted!

Learn more about how Best Friends cares for all the dogs at Dogtown.