It’s been 10 years since Hurricane Katrina devastated New Orleans and the surrounding areas, displacing hundreds of thousands of people and leaving thousands of pets stranded and fighting for their lives in the disaster area.

In addition to Best Friends’ on-site efforts, which included rescue work in New Orleans and at the Best Friends rescue base at Tylertown, Mississippi, the Sanctuary took in 145 canine Katrina survivors in the days, months and years following the unprecedented disaster.

Many of those dogs have since been adopted, including Yogi, who just recently found his home; however, a decade after their lives were turned upside down, we’re still caring for some of the storm survivors.

In the coming weeks, we’ll share updates on some of the pets who call Best Friends home, to let people know how they’re doing. Houdini and Jersey both survived Hurricane Katrina, but the storm had long-lasting emotional effects on both. By the time the two dogs were rescued, they were incredibly fearful, and that’s why they were brought to the Sanctuary. And though they were destined to become great pals, that friendship would not blossom until after they’d been at Best Friends for some time.

That’s because Houdini had always shown a tough exterior with other dogs. Jersey, on the other hand, loved other animals and was able to form nurturing relationships with them. But she was so shy around people that she preferred to spend a lot of her time in the quiet office of Best Friends adoption manager Kristi Littrell. There, she hung out with other dogs visiting the office, and became best friends with a cat named Ash.

Jersey was happy in the office, but the time came for her to branch out more. She started going to weekly shy dog socialization classes with about a dozen or so other shy dogs, and started meeting visitors and volunteers. Jersey soon became the star of the show, and started accepting yummy treats from lots of different people.

Meanwhile, Houdini had mellowed out with age and started embracing the friendship other dogs offered him. He took to sunbathing next to his doggy pals and going for walks with them. In fact, he started accompanying his dog friends wherever they went, whether it was an outing to the creek or a trail hike. Finally, he’d found a true esprit de corps in Dogtown.

During the winter, Dogtown caregivers decided to try Houdini and Jersey in a room together. That’s when the two survivors realized they are kindred spirits. Now, as Dogtown caregiver Paul Lindley explains, Jersey and Houdini go for walks together and inspire one another. As Jersey helps Houdini with his insecurity around other dogs, Houdini shows her that the world (and people) are not so scary. 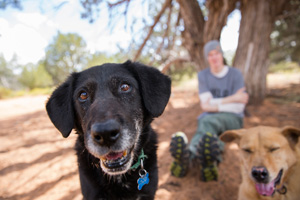 Now, on this 10th anniversary of their rescue, Jersey and Houdini greet each sunrise (and each other) with enthusiasm. They look forward to their daily walks together, and to the time they spend with volunteers, caregivers, and other animals. Having overcome so much in the wake of Hurricane Katrina, perhaps the most amazing thing is that they’ve finally found true friendship in each other.