Image
Little orange kitten rescued as a stray is showing just how smart, curious and clever he is. He is truly a kitten genius! Read more about him.
By Christelle L. Del Prete 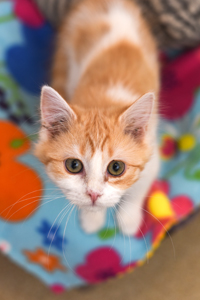 Peek into Nicholas’ room at Cat World, and you’ll see a ball of orange and white fur bouncing through the room chasing another kitten, a feather toy, or his own tail.

Like any six-month-old kitten, Nicholas’ leaping, pouncing and frolicking are helping him gain physical strength, coordination and the social skills he’ll need to become the perfect pet. But so far, Nicholas is turning out to be anything but an ordinary cat. Cat World caregivers agree he’s one of the smartest kittens they’ve ever seen.

At first, it was hard to tell just how smart Nicholas really is. He was only five or six weeks old when he was found alone at a community cat feeding station. His mother and siblings weren’t anywhere to be found, and poor Nicholas had a bad cold. So the little kitten was rushed to the Sanctuary for much-needed veterinary care and TLC.

As soon as he arrived, Nicholas soaked up all the affection he could get. Because he was probably a house cat who somehow had been lost or abandoned, he was just happy to be around humans again. Nicholas also began to recover and start feeling much better. That’s when he began to show how bright he is.

One day, Nicholas wanted to enjoy the sunshine in his outdoor cattery. That meant going through the cat door, which he’d never done before. After watching his roommate go through the small plastic door, Nicholas sauntered confidently up to it, gave it a shove and stepped right out into the sunny enclosure.

Clever Nicholas also learned some neat new tricks by watching his caregivers. To keep him entertained, they give him plenty of toys to play with and rotate the toys that are out in his room. The toys that aren’t being used are stored in a drawer. After seeing his caregivers open and close that drawer a few times, Nicholas put his little paws on the sides of it and gave it a tug. In no time at all, the entire room was filled with toys.

But perhaps Nicholas’ most clever trick happened on the day one of his caregivers switched on the humidifier in his room to help with his breathing. Nicholas had watched her do this a time or two. As soon as his caregiver switched on the machine and turned her back, Nicholas sprinted over and pressed the power button. The caregiver powered the machine back up, and then watched with shock as Nicholas went over and swatted the power switch off and then on again.

Learning how to read 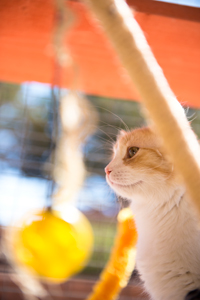 What’s next on Nicholas’ agenda? He’s decided he needs to learn how to read. Cats at the Sanctuary sometimes have stories read to them, and, one day, Nicholas’ caregiver brought her e-reader into his room. When she set down the device, Nicholas snatched it up in his mouth and snuck it outside through the cat door — no doubt intending to create his own reading nook in the cattery.

Whether or not Nicholas actually does learn to read and go on to become the next cat genius, it’s likely that the curious, intelligent kitten will master a few more tricks before moving on to his forever home. Though it’s beginning to appear that in addition to finding a home for Nicholas, we should start saving for his college tuition.

Note: Great news, our resident kitten genius has an adoption pending. Nicholas is scheduled to go to his new home this week.