It's no secret that volunteers help maximize the ability to save animals' lives and increase their chance of leaving shelters and rescue groups to find new homes. Whether it's by enhancing the sociability of pets-in-waiting or networking them online across social media platforms, volunteers play an ever-expanding role in getting animals to safe haven. So it's no wonder that Best Friends has found a way to use volunteers in a new and exciting capacity. Today, they're a vital part of the intake team in Los Angeles.

"As part of the NKLA (No-Kill Los Angeles) initiative, we work with the city shelters to move animals into our facility to find them adoptive homes," says Mike Harmon, manager of the Best Friends Animal Society Pet Adoption Center in L.A. "We have found that the mainstay volunteers of the city shelters are smart, and they really know the animals. We realized that we could be maximizing our lifesaving capabilities by empowering them to determine which animals should come to us. That can shorten the animal's stay at the shelter and free up space for them to take in someone else."

As a result, each of Los Angeles' six city shelters has a team of specially trained volunteers who are authorized to pull animals from the shelter on behalf of Best Friends. The intake volunteers are given guidelines on how to perform evaluations and what types of pets to look for, and they are able to use their judgment to decide who gets sent to the pet adoption center in Mission Hills. These volunteers ultimately pull and transport around 30 animals per week. Depending on the availability of space, up to 80 animals per week can arrive at Mission Hills, from intake volunteers and from our NKLA Coalition partners.

Helping get animals out of city shelters

At the North Central Shelter, Kerry Armstrong has been a volunteer at the city shelter for over a year, and she relishes her autonomy to help get animals out. "It's a huge relief to the shelter. We're helping to quickly open up kennel space, which gives the other animals there more time to find a possible adopter or rescue group," says Kerry. 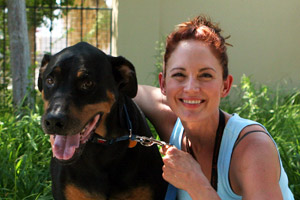 Even before she officially became part of Best Friends' intake team, Kerry had been recommending dogs to Mike regarding which ones might be good candidates to go to the Best Friends adoption center, as well as writing their adoption profiles and posting them to the shelter's Facebook page. While each dog she pulls is special, she says she always has her eyes peeled for the "black Staffie mixes - those dogs who are wonderful companion animals, but are often overlooked."

Katie Keane, who is also part of the intake team based out of the North Central Shelter, and volunteers in transporting the animals, says, "Knowing the animals are going to Best Friends means that even if they're not adopted quickly, their quality of life will be great. Between play groups and training sessions and the legions of volunteers who come in to socialize the animals, it's a great life until they find their forever home."

Find out more about Best Friends' work in Los Angeles.